The Islands in the Sky District of Canyonlands National Park is only 13 miles as the crow flies from Arches National Park, but it might as well be 1300 miles. It defies description how two places so close together can be so different. Whereas Arches whacks you in the face with towering, unlikely formations of rock that rise straight up from the surrounding terrain, Canyonlands overwhelms you with deep, unlikely canyons that drop straight down from the surrounding terrain. Arches is an area of specific, localized monuments to the forces of nature; Canyons is an area of vast, endless vistas that testify to the forces of nature. The two places are equal but opposite testaments to nature’s inexorable constructive and destructive forces relentlessly applied to the earth’s surface.

The Canyonlands plateau is an area within the Colorado plateau, the latter encompassing 130,000 square miles of land generally located in the four corners area of Colorado, Utah, Arizona, and New Mexico. While the Pacific and North American plates pushed against each other, one sliding over the other at about two inches per year, and crinkled up the surface of the earth to form the Rocky Mountains, that same movement actually lifted the four corners area straight up as a huge plateau. (I know, I know — how can one lift up a piece of rock 130,000 square miles big and tens of thousands of feet deep? That’s just one of an infinity of incomprehensible realities in this area.) Then, just as nature created the expansive, flat area, it began wearing it down. The top 4000 feet of the plateau has already been worn completely away by water and wind. Where rivers flow through the area, they wear it down even further. Here in Canyonlands, the river canyons are about 1400 feet deep.

This picture was actually taken at Dead Horse Point State Park, which abuts Canyonlands. The park has actually been used in many movies as a surrogate for the Grand Canyon because (1) filming here is easier than on federal land and (2) at least in the eyes of the State of Utah, it’s actually more beautiful. Utah formed the first “film commission” in the United States back in the early 20th century and has gone out of its way to accommodate the movie industry ever since.

We spent several days here, not nearly enough time, and did our usual activities: hikes, picnics, and ranger talks. As we were doing all that, completely enjoying everything about this place, we wondered whether this park would be a good place to bring young children. Definitely not. There are far too many precipitous drop-offs and even a moment of inattention could have tragic consequences, although in reality a child would hit a ledge about 400 feet down rather than dropping all the way to the canyon floor. Still, for most parents, that difference probably wouldn’t matter. 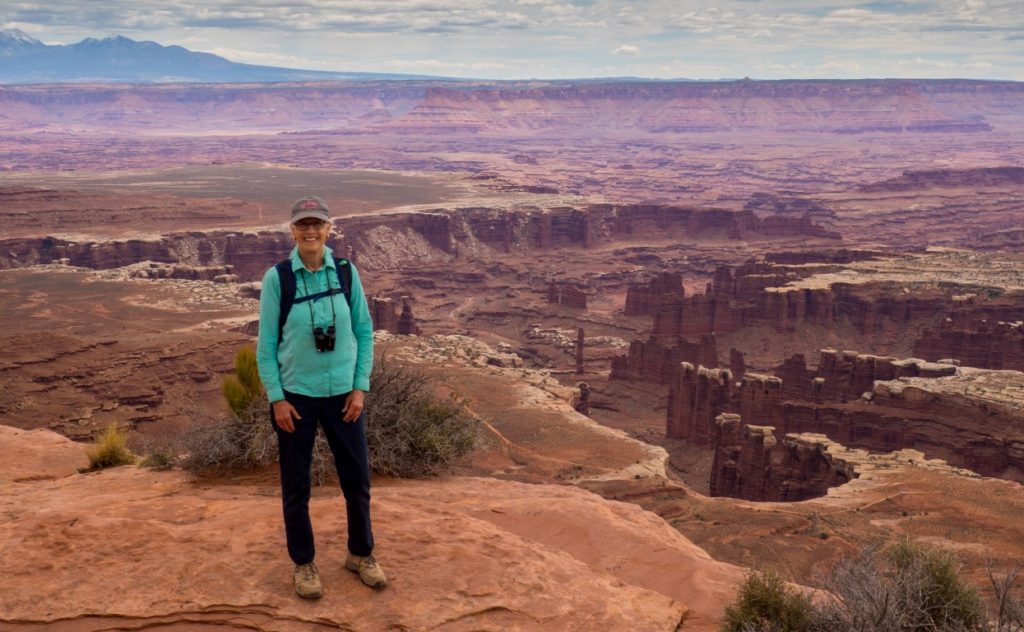 Hiking along the Colorado River rim, on our way to a beautiful picnic spot. (Wendy calls this spot “Monty Python’s Castle.”)

One hike worth noting was to Upheaval Dome. Scientists don’t know if this crater with strange green rock in the middle represents a collapsed salt dome or the impact of a huge meteor, although the latter possibility is the current favorite. If it were a meteor, it hit 25 million years, was 1/3 of a mile wide, and hit the ground with the force of a nuclear explosion. Now that would be fun.

We also lucked out and stumbled into an evening “star party” hosted jointly by rangers from Arches, Canyonlands, and Dead Horse Point State Park. The rangers brought six telescopes, enough that the 50 or so people in attendance were not hurried at all. We saw Jupiter, including that “storm” (like a hurricane, I’m told) that’s been raging for 300 years, the “ring nebula” (the circle of dust and gas left over when a star exploded!), and (my favorite) a spiral galaxy. And, of course, because the skies are so dark and the air is so clear, we were treated to the sight of the Milky Way rising before us.

And I was able to get up at 3:00 a.m., again, actually for the third time in the past week, to travel off to a special photo location and snag a picture of sunrise at Mesa Arch. That shot is something of an icon for the park, and is on the bucket list of most serious photographers.

One of the classic, iconic views of sunrise at Canyonlands as seen through Mesa Arch, with the Colorado River canyon and several spires visible in the background. I arrived at the arch at 4:50 a.m., over an hour before sunrise. There were already six photographers lined up, tripod-to-tripod, when I got there. At T-minus-30 minutes, the number had grown to about 30. And then, believe it or not, a tour bus of 30 Asian photographers showed up, which made for quite an experience when the sun finally popped up, with dozens of shutters all clicking in rapid succession. In any event, more pictures of the Mesa Arch sunrise are on the photo albums page.

We ran out of time and did not get to do all of the hikes on the list of recommendations, and we didn’t get to see the other two units of the park at all. But still, this was a dramatic and unforgettable place.