To us, the Florida state parks are among the best, and one of the best of those is Topsail Hill Preserve. My recollection is that the park, also known as the Gregory E. Moore RV Resort, used to be a private RV resort and somehow ended up in the hands of the state. In any event, the park is located about 15 miles east of Destin and is a jewel of a campground: beautiful paved sites, nicely separated, full hookups (including cable TV), great location on the beach, close to lots of attractions, and so on. It’s hard to imagine doing much better East of the Mississippi. Click here for our review.

Saturday, 26 January
For this trip, we caravanned with our good friends, Rick and Mary Horder, and had adjacent sites near the back of the campground. 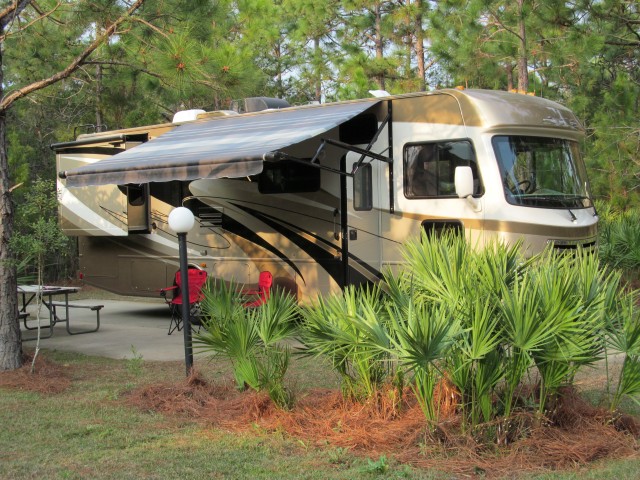 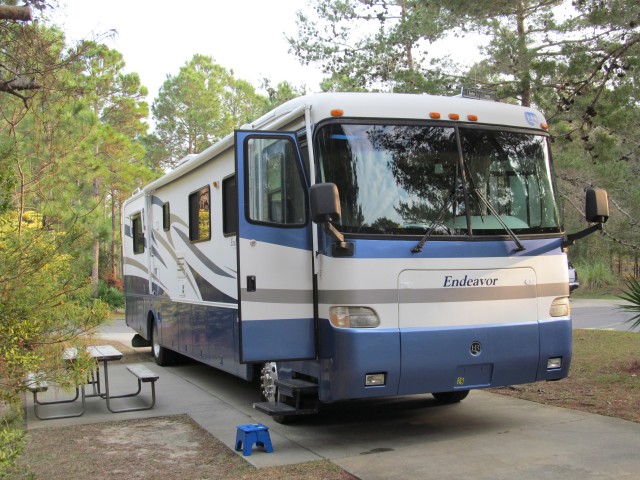 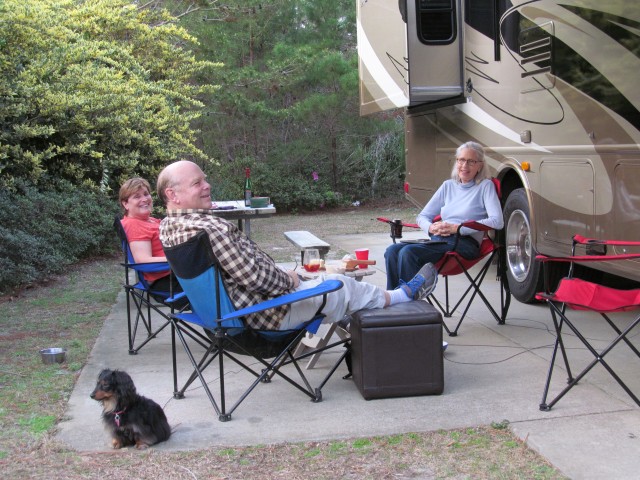 Cocktails before heading over to Dewey’s in Destin for dinner. (How’s that for alliteration?)

Sunday, 27 January
When we were last here in November 2004, it was shortly after Hurricane Ivan. We had planned to visit Fort Pickens on the Gulf Islands National Seashore, but as you can see from the photos below, Ivan went directly over the island and Fort Pickens, well, was inaccessible except to scuba divers. 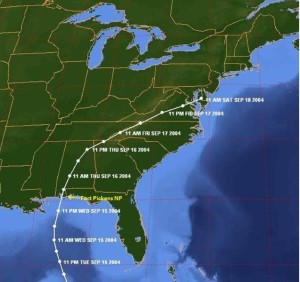 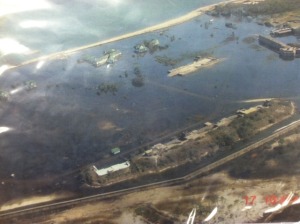 The amount of devastation was stunning. Buildings were lifted off their foundations and moved tens of feet toward the mainland, the road was obliterated, and I can’t even imagine what water damage must have occurred to the infrastructure. But now, a mere 8 years later, the facility is open and, except for the trees shorn off about 15 feet up, I could see no evidence of hurricane damage. 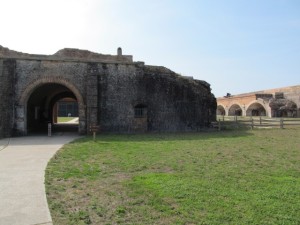 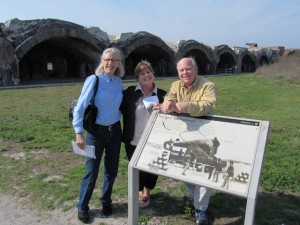 28 January
We spent only a little time at the beach (in this case, some no-name Okaloosa County public beach down the road from Topsail Hill): 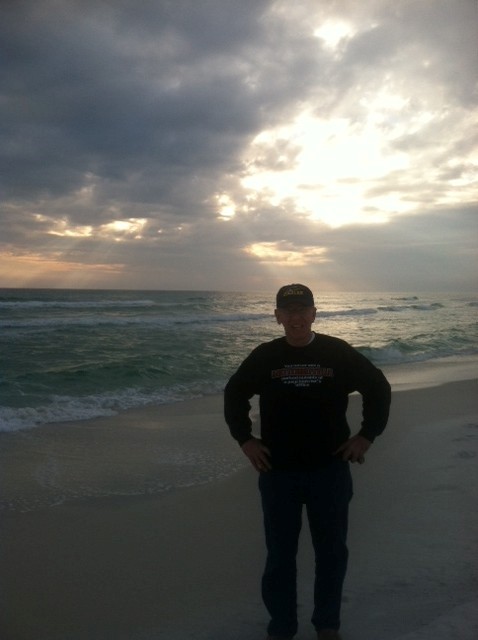 Wendy resolved to have seafood every night while we were in Florida, which was perfect for the Horders, so we ate out for the first couple nights. But Monday night we stopped by Blaylock’s in Destin, picked up some shrimp and crab, and cooked out. 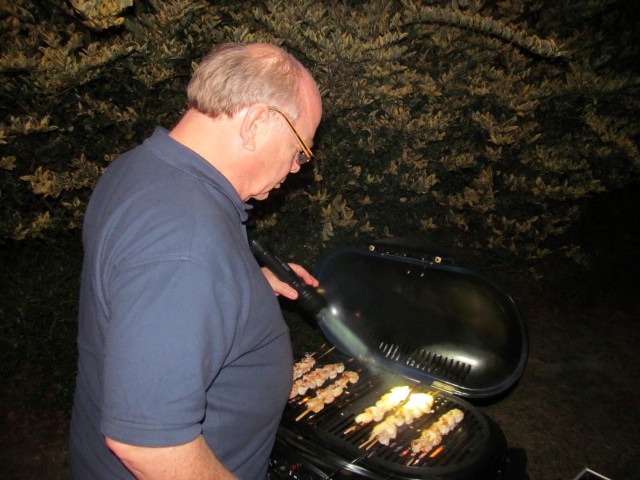 Shrimp on the barbie 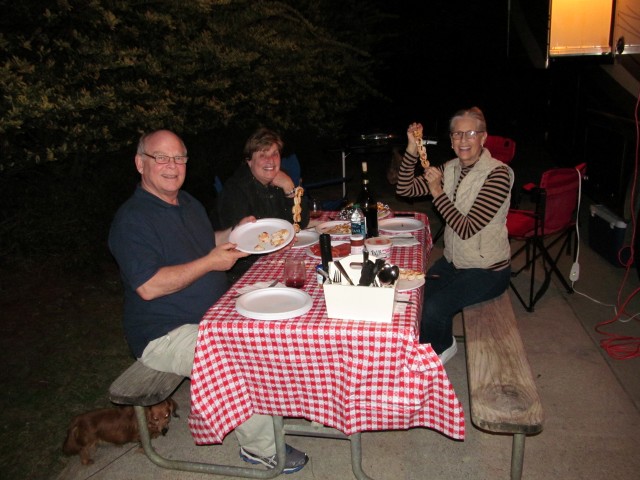 Seafood dinner under the stars (except (1) it was cloudy and (2) we were actually under the awning).

The photo album for the trip can be found here.

Next planned trip: Disney Fort Wilderness at the end of February.

In 2002, my younger son (Robert) and I went on a hunting trip to Bullock County, Alabama, while he was home on Christmas leave from West Point. As it turned out, the hunting lodge burned down, but that’s another story. As we were driving along touring the area, we happened upon a guy in camo walking along the side of the road with a rifle slung over his shoulder. I stopped and asked, “Need a lift?” and he replied, “Boy, that would be great.” As we were driving along, we mentioned that we were visiting on a hunting trip and he asked, “You wouldn’t by any chance want to come back hunting next month, would you?”

It turns out that the hunting possibility he mentioned occurred because the local school, the Conecuh Springs Christian School, had a great idea for a fundraiser: the local landowners would take you to their absolutely favorite, private property hunting spots, if and only if you made a suitable donation to the school. I started going on these trips back then, and have pretty much gone every year since. In 2011, my older son (Cliff) came with me; in 2012, both sons came.

This year, though, had an extra attraction. The local hotel, which was pretty, um, “minimal” anyway, had a change of ownership and the hunt sponsor was suggesting that we might want to consider alternative housing arrangements. As it turns out, a local hunting lodge was available, but the lodge also had RV hookups! Hunting and RVing! What could be better? We booked our reservations at the Greenway Sportsman’s Club [Edit: Removed broken link] and off we went. 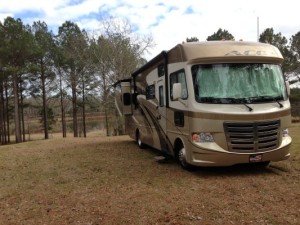 The RV area was basically OK: just a grassy area, but with full hook-ups (including cable TV!), although the weather was cold enough that we stuck to power only and relied on the onboard water supply.

There had been a lot of rain lately, making the ground somewhat soft, and I had some difficulty finding a level spot, and the leveling boards kinda sunk in the soil, and the automatic stabilizers wouldn’t deploy. Hmmm. But we eventually got a satisfactory setup, enough to use the bedroom slideout at least, and ACE provided a great base camp for the hunting trip.

As usual, meals were provided by the school in the school cafeteria. Thursday night was fried catfish, Friday night was steak, and Saturday night was BBQ, with each meal accompanied by an unbelievable assortment of home-made desserts!

The hunting, as usual, was perfect. Cliff and I took 5 deer over the course of 2-1/2 days, but easily could have taken more. At one point, no kidding, I had roughly 24 deer in front of me. 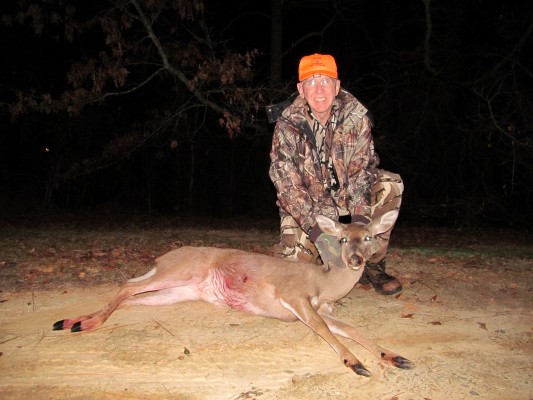 Me, with a H-U-G-E doe taken one afternoon. 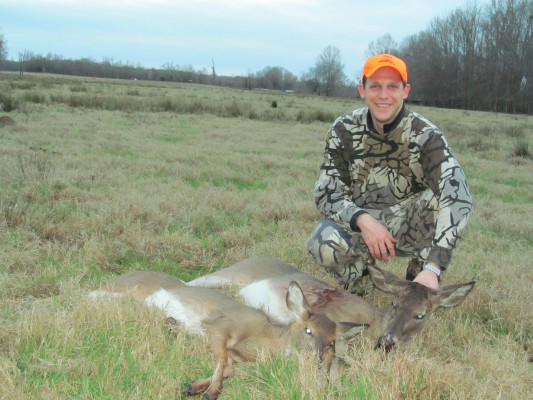 Cliff, with two doe taken the next day within two minutes of each other. 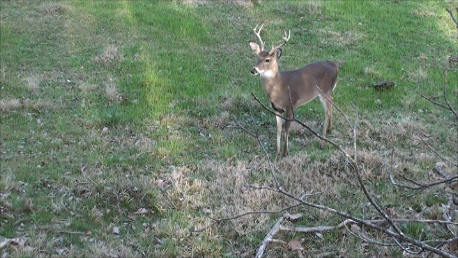 Cliff let this guy walk, figuring he needs at least one more year to grow into the buck he deserves to be.

Like all good things, though, the trip eventually ended, the chapter closes, and it’s back to the real world. Not to worry, though, we already placed our deposit and we’ll be back next year. More pictures of the trip can be found here.