We’re getting ready to leave on our next big trip out west (more on that below), but first a solo trip to Mt. Airy, North Carolina, for a shake-down cruise and a meeting of my amateur radio club. So, in the natural order of things, that’s what this post would be about. But the fickle finger of fate, combined with irresistible force of divine providence (or something like that), had other plans. So here goes…

The campground here (Mayberry Campground) (because it’s near Mt. Airy, which was the model for the town of Mayberry in the old Andy Griffith show) (which is a story in itself, but one I can’t mess with right now) sits on the historic property of Chang and Eng Bunker, the original Siamese twins, and is run by descendants of the Bunkers.

The story of the Bunkers is so improbable that, if it weren’t true, one would brush it off as a ridiculous fairy tale. 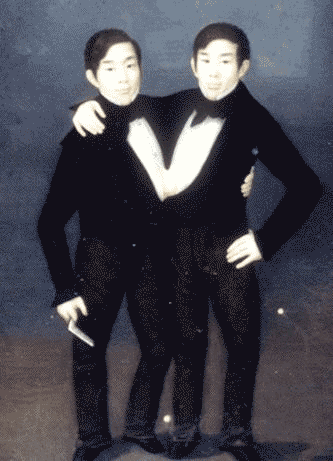 Chang and Eng were born in May 1811 in Thailand (then known as Siam). Now known as “conjoined” twins, they were joined at the sternum and shared a common liver, although they were otherwise complete. Conjoined twins occur when, in the early stages of development, an embryo that would otherwise separate to form twins only partially separates. Conjoined twins are rare, occurring in about one out of every 200,000 live births. Surgical teams are increasingly capable of separating many such pairs, but in the era of Chang and Eng, separation would have resulted in certain death for both.

For a while, Chang and Eng were under contract to a company that paraded them around the United States as a curiosity, but after that contract expired they settled in North Carolina where they bought a farm. [NOTE to all readers under the age of 30. Because this story occurs in the early 19th century, Chang and Eng operated their farm using slaves. For you, that makes them morally repulsive and unworthy of anyone knowing anything about them. Accordingly, to protect your fragile psyches, you are encouraged to stop reading now.] North Carolina was a slave state but under U.S. law, the twins counted as white. [Young people: don’t ever go to North Carolina.] They sought and were granted U.S. citizenship, but when they got to the naturalization office and were told that U.S. law required them to have a surname, so they adopted the name ‘Bunker’ from the man standing behind them in line.

In 1843, Chang and Eng married two local sisters, Adelaide and Sarah Yates. Originally, the two couples lived in a single home, sleeping in a bed made for four (strange-but-true fact #1) (imagine sleeping like that) (as one example, how did they roll over?), but after a period of time the two sisters began to dislike each other (#2). So, the two couples arranged to live in two separate homes, with Chang and Eng alternating between the two homes (#3), thereby allowing the sisters to minimize their contact with each other.

Over the course of the following years, Chang and Adelaide had eleven children and Eng and Sarah had ten (#4) (the strange aspect of the fathering-children-thing is self-evident). Chang’s son Christopher and Eng’s son Stephen both served in the Confederate army, where they were wounded and captured by Union troops. [Young people: I told you to stop reading; don’t blame me if you just learned that there was a civil war.] As a result of the war the two brothers lost almost everything. In 1870, as they were returning from a tour of Europe and Russia, Chang suffered a stroke down the side closest to his brother. Eng nursed him as best he could, carrying around Chang’s now useless leg in a sling as his ailing brother leaned on a crutch. Shortly thereafter, Chang began drinking heavily (which did not affect Eng, because the two brothers did not share a circulatory system) (#5) (imagine being joined at the chest to a tipsy brother) and in 1874 Chang died while the brothers were asleep. Eng awoke to find his brother dead, exclaimed “Then I am going!” (#6) and died a few hours later (#7) (imagine being joined to a corpse, and having to wait a few hours for the inevitable). And if all of that isn’t enough, the Bunkers’ shared liver was removed and can be seen in Philadelphia’s Mütter Museum to this day (#8). 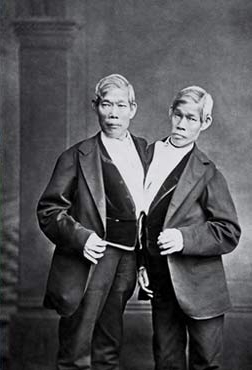 Chang and Eng in their later years.

The Bunker dynasty, however, lives on. There are more than 1500 descendants of the Bunkers, many of whom live in the Mt. Airy area, and several of whom are prominent in their fields. United States Air Force Major General Caleb V. Haynes was a grandson of Chang Bunker through his daughter Margaret Elizabeth “Lizzie” Bunker. Alex Sink, former Chief Financial Officer of Florida, is a great-granddaughter of Chang Bunker and was the Democratic nominee in the 2010 Florida gubernatorial election. Eng’s grandson through his daughter Rosella, George F. Ashby, was President of the Union Pacific Railroad in the 1940s. Composer Caroline Shaw is a great-great-granddaughter of Chang Bunker and won the Pulitzer Prize for Music in 2013.

Now … back to the actual point of this post.

How did the shakedown cruise go? Fine.

What about the upcoming trip? Here it is: 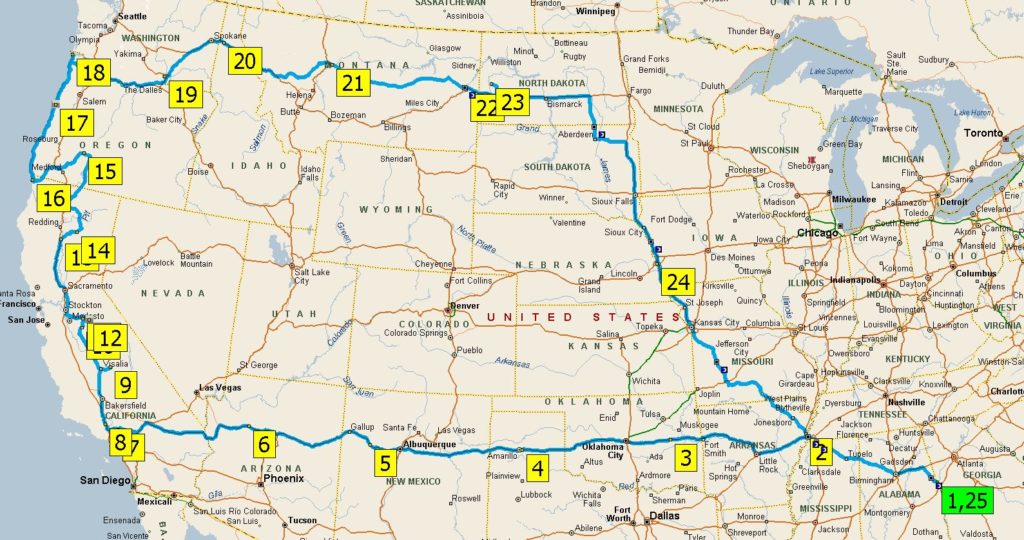 That’s it for now. Further details on the upcoming trip will follow.