Every year, Cliff and I journey off to Union Springs, Alabama, for the Conecuh Springs Christian Springs charity hunt. I’m told that I was actually one of the first hunters, maybe the first, in the program. It all began back in the early 2000s when Robert and I were on a hunting trip in Alabama and decided to drive around and see the area. As we were driving along on some dirt road, miles back into the woodlands of the county, we saw some guy walking along the side of the road with a rifle slung over his shoulder. “Need a ride?” we asked. “Boy, do I ever!” [Digression for readers living in New York, Massachusetts, California, Washington, or any major American city: No–it’s not unusual to see a guy with a gun out in the woods, no–it’s not dangerous to stop and talk to such a person, no–he’s not going to shoot you, and yes–there are places in this country where strangers stop to chat and are friendly and helpful to one another. Now back to the story…] As we were talking, he asked, “I don’t suppose you’d be interested in doing a deer hunt, would you?” and then proceeded to explain the concept behind the first charity hunt that the local Christian school was putting together.

The idea is the local farmers would take you to their absolutely favorite hunting places on their own property, the places where they knew the odds were very good for seeing deer, and let you hunt there for three days, but at the cost of your making a nice contribution to the local Christian school. It’s a totally win-win situation. The cost is very modest compared to commercial hunts, and it’s not only great hunting, it’s a chance to hang around salt-of-the-earth, decent people who are as warm and welcoming folks as I’ve ever met.

So, this year is the umpteenth trip back to central Alabama, back to parking the motorhome at the same hunting plantation, and then back again to the farm of Don and Connie Jones for three days of hunting. The Joneses raise limousin cattle, a breed known for producing very lean and tender beef, commonly sold as “Laura’s All-Natural Lean Beef.”

Hunting always produces great stories (which, like fishing stories, are rarely true, but who cares?) but this year the stories were the best ever.

Day 1: Cliff saw a monster buck, but it was too far off for a shot, so he took a shot at a doe (or so he thought). The deer took off like it was shot out of a cannon, right for the fence at the side of the pasture. He heard a crash sound at the fence line and we took off to recover the doe. Instead of a deer piled up on the fence, though, we found this: 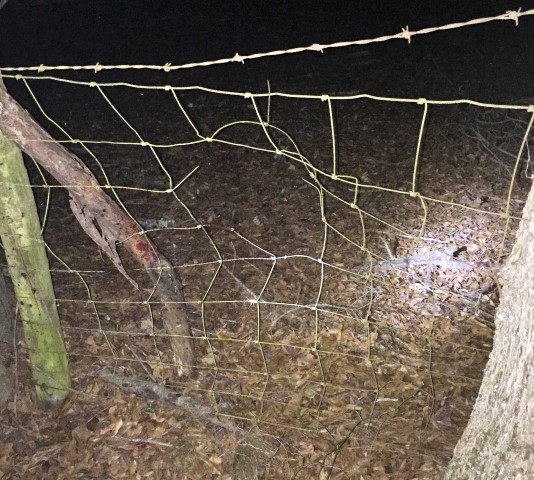 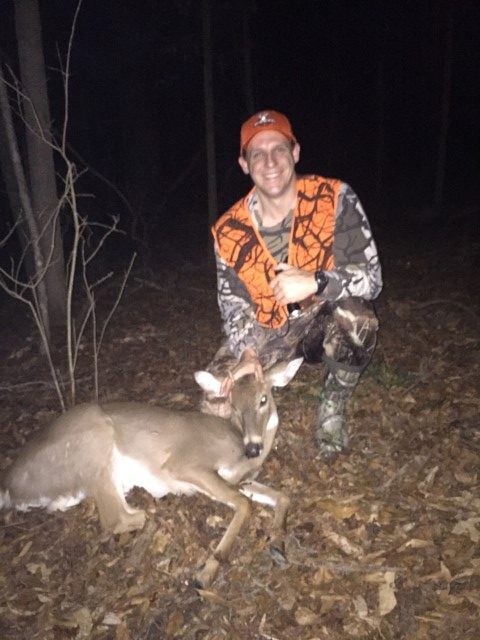 We eventually recovered the deer (it turned out to be a spike, not a doe) way back in the woods.

Day 2. That morning, Cliff took a shot at another doe (this time it actually was a doe) and once again it headed off like it was shot out of a cannon. (Cliff must be using rocket fuel in his hunting rounds or something. What’s the deal here?) Instead of blasting through a fence, though, this time the deer propelled itself over a cliff and down ten feet into a creek, where it promptly lodged itself under a log. 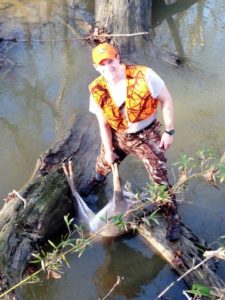 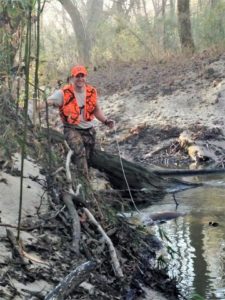 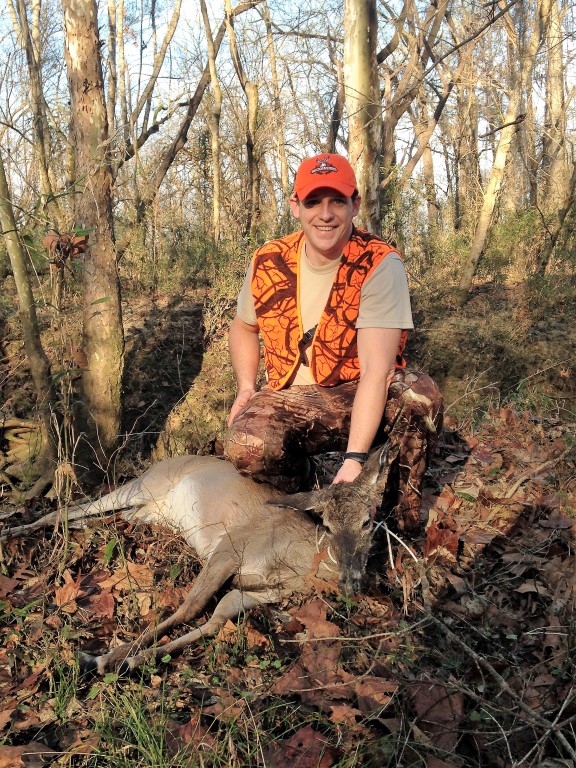 The extraction process took over an hour, but basically involved Cliff straddling two logs, muscling the doe out from underwater and then over the downstream log, tying a rope around its neck, floating it downstream to a place where the embankment was slightly less vertical, and then pushing it up the embankment while I pulled from the top. It was actually a fun, if somewhat muddy, endeavor.

Later that day, Cliff returned to the pasture where he had seen the monster buck the day before. For non-hunters, deer are highly unpredictable. Sometimes they show up, and sometimes they don’t. If they do materialize at some location, there’s no telling which direction they’ll come in from. The “home range” of a buck can range anywhere from 100 to 700 acres. Bucks, especially large bucks, are especially erratic. They didn’t get to be big, old animals by being stupidly predictable, and on top of that they have evolved over millions of years to avoid predators, such as humans. Although a deer’s hearing is not much better than ours, their sense of smell is up to 10,000 times better than ours (a deer can detect a foreign scent, and avoid the area, up to a mile away) and a deer will almost always enter an open area downwind of the woods, so that it is sure to pick up the smell of any danger lurking in the woods. The smart ones will even sometimes circle an area so they can enter it from downwind. They see about five times better than we do, and their eyes are particularly adjusted to detect movement. Plus, hunters subscribe to a code of ethics that requires one never to take a shot at a deer unless one is sure of a clean, humane kill. The result of all this is that even with modern-day camouflage, scent-suppressing chemicals, and long-range rifles, combined with the fact that most hunters are smarter, at least somewhat smarter, than woodlands animals, the odds of being able to get a good shot on a deer are very low. Just to illustrate the point, while Cliff’s hunts are proceeding as described here, good ol’ dad is sitting about a half-mile away, overlooking a nearly identical pasture, not seeing anything. Such is the nature of hunting. As the expression goes, “That’s why they call it ‘hunting’ and not ‘shooting.'”

So, Cliff decided to park himself overlooking the place where the monster buck had shown up the day before, hoping (against considerable odds) that the buck was following a routine that would compel him to show up in the same place again, that Cliff could avoid detection (he was hiding behind a fallen log, downwind of the buck’s previous path), and that all of this would come together in a way that would allow Cliff to get a good shot. Unbelievably, all of that actually happened and here’s the result. 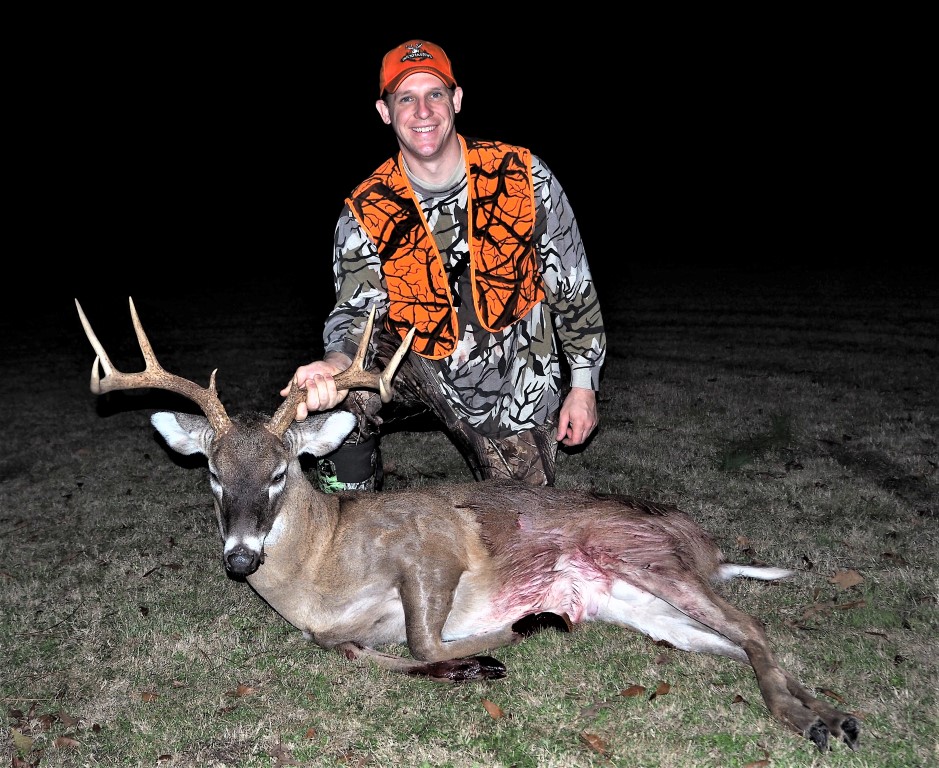 A very nice buck (over 200 pounds), the largest Cliff has ever taken. We were told back at the Christian school later that night that this might be the largest buck ever taken on the annual hunts.

I eventually did manage to take a couple deer, but the real stories of this hunt are all Cliff’s. What a great and memorable weekend. We’re already anxious to come back next year.