Well, we continue one-by-one to introduce the grandkids to the “camping experience.” This time was granddaughter #2, Ansley, Age 4. We decided that, at her age: (1) she really needs at least one parent to come along, (2) “camping” is a relative term and probably means little more than sleeping in the motorhome, (3) activities like a swimming pool, bike riding, and S’mores by a campfire mean more than an in-the-woods experience, and (4) she doesn’t know the difference between a 20-mile trip and the 200-mile alternative, so something close is better than something far. With all of those factors, we decided on the Pine Mountain RV Resort, all of 22 miles away from the house. 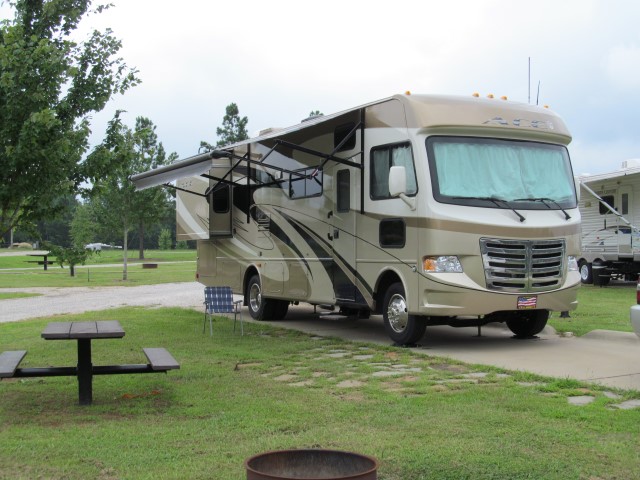 All set up on the couch, some random princess in hand (I think this one is Ariel, but as explained in an earlier posting, I don’t get the whole princess thing.) 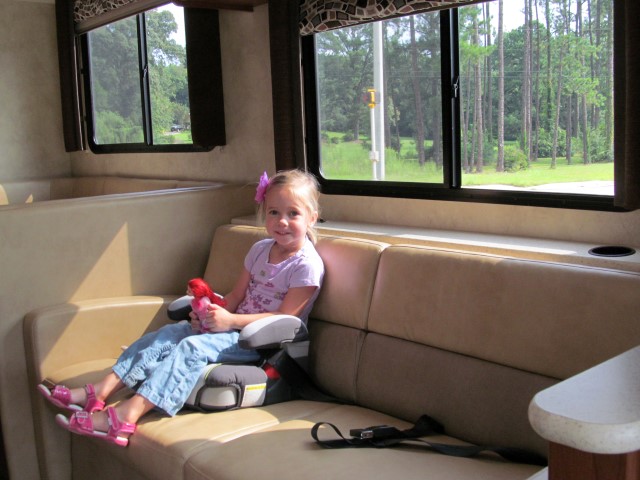 We were situated in the new area of the campground, which really hasn’t grown up yet. But it was next to the pool and came with full hook-ups and cable TV (which we didn’t watch). A full review of the campground is located here.

Upon arrival and after a quick lunch, we headed off to the Callaway Gardens butterfly house. 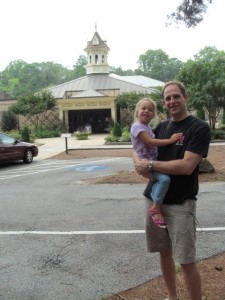 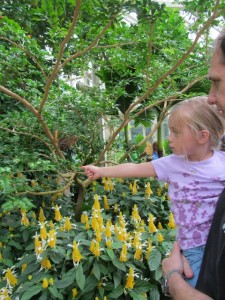 Unfortunately, though, it was one of those moments-with-a-four-year-old when the early warning signs of fatigue, coupled with a potentially short fuse, meant that retreat was preferable to defeat so it was time to beat feet, and back to the campground we went.

Which was fine… an afternoon of swimming … 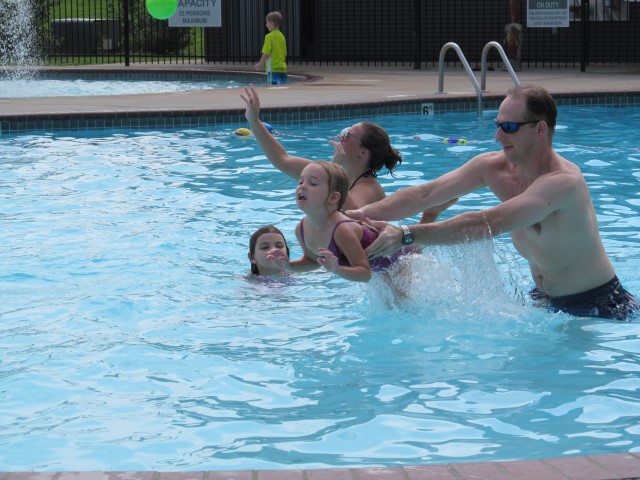 Followed by dinner, a campfire, and s’mores… 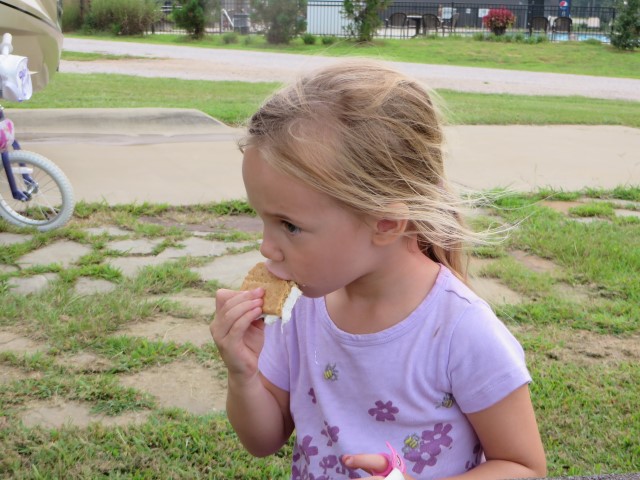 …led to an early bedtime.

And the next morning saw the traditional bacon-egg-cheese bun (which, yet again, the LD showed no interest in even trying … what’s wrong with the children?).

And a lunchtime departure for the L-O-N-G (ha ha) drive (22 miles) back home. The full photo album of the trip is located here.

I think I’m really getting into the “”Motorcoach Resort” thingie. When we first got ACE, our assumption was that we would, as we’d done with the pop-up and the trailers, camp mostly at state and federal parks. And we will. I promise. But there’s something to be said for the luxury of an RV “resort,” like my last experience with the Hilton Head RV resort. Only this time, in the midst of an Atlanta oppressive August heat/humidity assault, we headed up to Lake Toxaway, NC, and stayed at the Mountain Falls Motorcoach Resort. What a place. Although it rained every day, when it wasn’t raining the weather was cool and clear, the views were breathtaking, and the environment was, well, what one would expect from a place that bills itself as a luxury motorcoach resort.

This was our street: 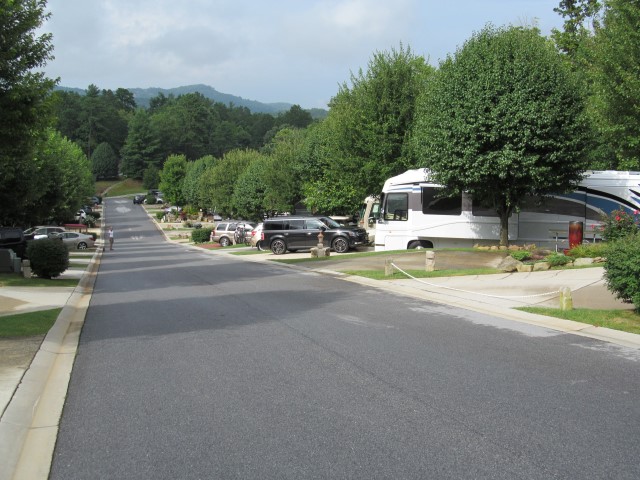 This is the way the “campsites” are “furnished.” 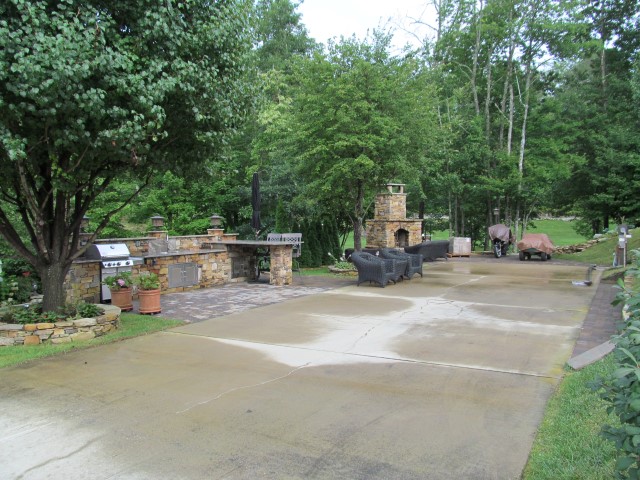 ACE was definitely the runt of the litter, but fit in acceptably well nonetheless: 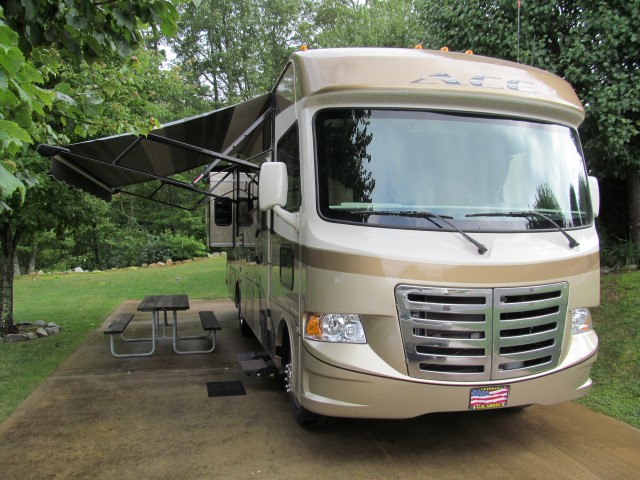 And a waterfall on the grounds to add ambiance: 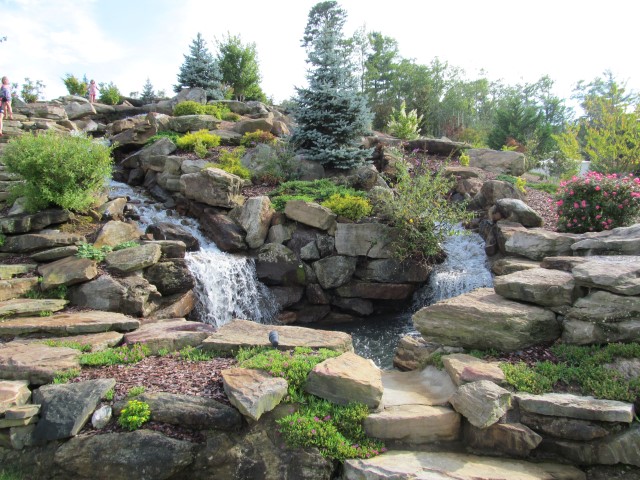 We played golf a couple times at the local executive course designed by a friend: 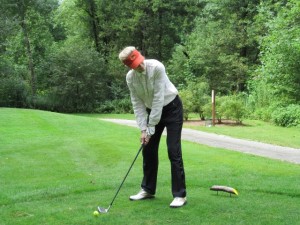 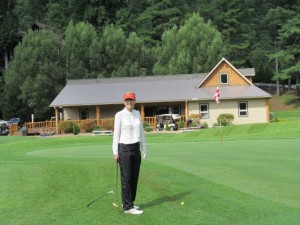 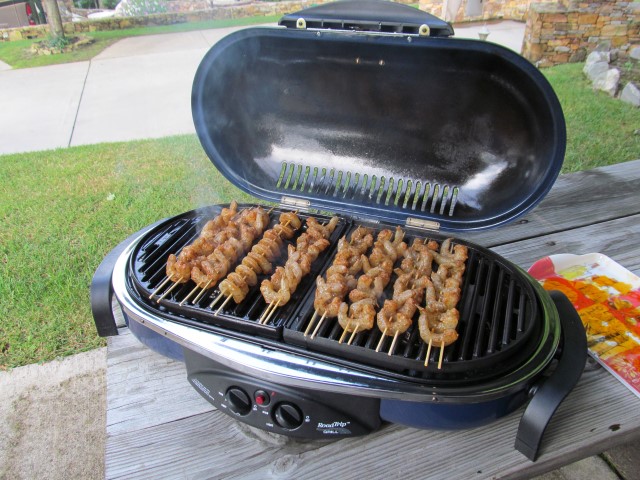 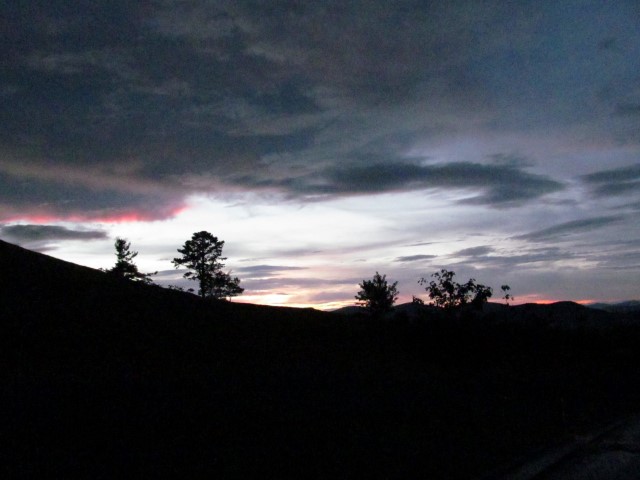 And, after dinner with friends at the Gamekeepers’s Tavern (where I had, no kidding, kangaroo steak for dinner), we headed back. 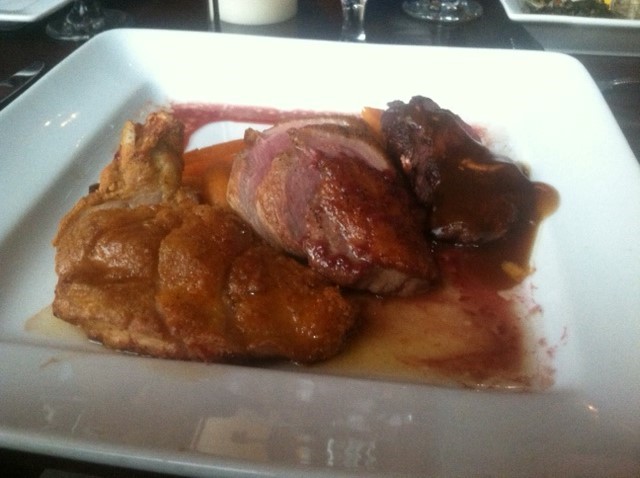 (Pheasant, duck, and kangaroo. The last item tastes like beef–maybe like a moo-cow would taste if it spend its life roaming the prairie, jumping up and down) (whatever that means)

So, what’s not to like about this “luxury” motorcoach experience? Nothing that I can think of.

This was also our first trip with the toad doing “mountain” driving. As it turns out, it was a total nonevent. We didn’t break any speed records heading up, although we were faster than the truck traffic. And coming down was fine, although it took me a while to learn how to shift manually between 3rd and 2nd to keep the speed under control. Based on this experience, I’m definitely ready for the Rockies. Well, almost.

Overall stats for the trip:
Total distance: 476 miles
Camping expense: 3 x $55/night
Fuel economy: 6.72 mpg (which is probably an average of our usual 7.8 mpg when pulling the toad, weighted on a mileage basis with about 3.1 mpg going uphill with the toad)