First, the good news. Despite the challenges faced by the park, as described below, not a bit of that detracted from our experience here in the slightest. This place is wonderful. 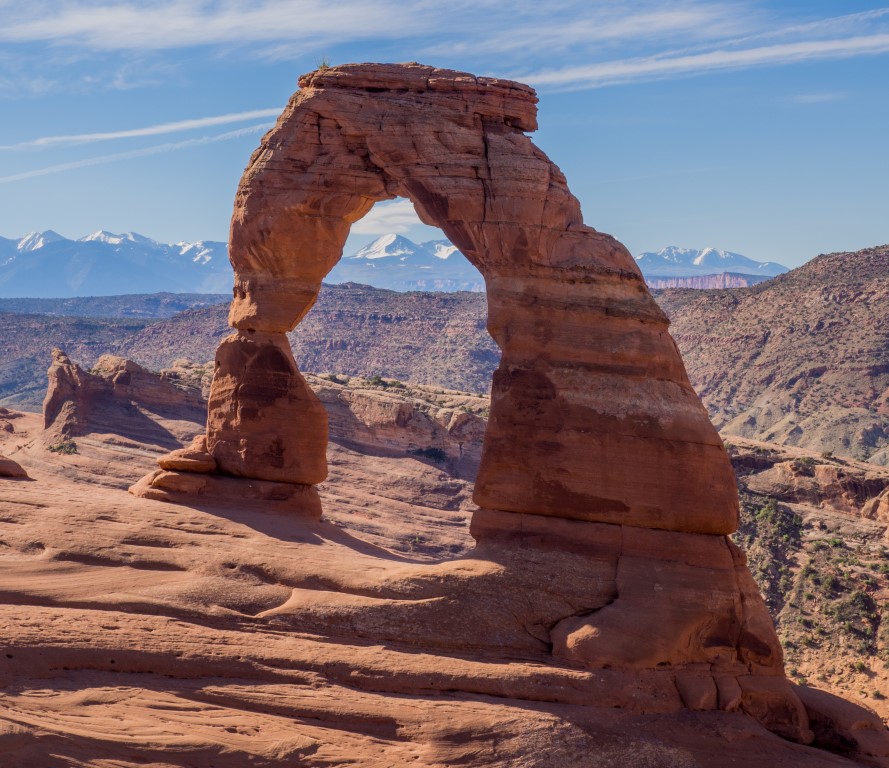 Delicate Arch, the iconic symbol for Arches National Park. And the very same arch that appears on Utah license plates as the symbol for Utah. And probably the one arch that comes to mind for everyone when they think of this park, whether they’ve been here or not.

Arches, as one might expect from the name, has thousands of arches. Over 2000 to be precise. More than anywhere on earth. The explanations for how these arches came to be was never completely clear, but I think it’s something like this. This whole area used to be an ocean that accumulated sand and sediment. Then it dried out. Then it was a lake. More buildup. Then it dried out. Then a swamp. Then dry again. Then a lake. Then dry. Then an ocean again. And so on for dozens of epochs, leaving dozens of layers of rock made up of varying kinds of stuff. Then the whole area got lifted up as part of the Colorado Plateau and started getting worn down by water. As rainfall would hit the rock, it would seep in and in some cases it would hit a layer that was less permeable, so the water would move sideways. As it did, it eroded the rock along the horizontal layer, leaving a layer of intact rock above it. Over time, it wore out the whole kabob, leaving a hole with rock above it. Presto change-o, an arch. This area just happens to have the right combination of layers with the right permeabilities to lead to arches everywhere. Other formations occurred in similar ways. Sometimes there’d be a little clump of really impermeable rock, and everything around it would get worn down. Zippity-doo-dah, a spire. Or sometimes a sliver of impermeable material and abracadabra, a fin. Or a big area, and you get a butte. (I’m pretty sure that if a ranger read this, he’d throw up in his Smokey-the-Bear hat, but too bad. That’s close enough for this story.) 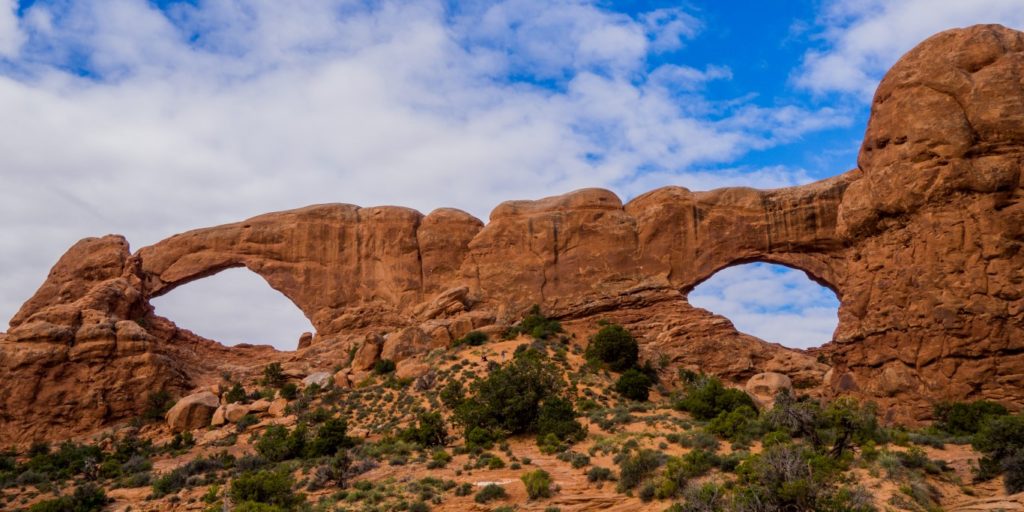 “The Windows,” a pair of arches. On the South Window (the one to the right), you can plainly see a layer of rock that’s been worn away and that is different than the layers above and below it.

Turret Arch. Note that area being worn away just to the left of the hole. That’s an arch in progress. Come back in a few million years, and there will be an arch there, although the span over the current arch may be gone.

“Double Arch,” again with a plainly visible pocket being eroded below the right side of the front arch. Maybe someday this will be renamed “Triple Arch.”

You get the idea. But it’s not just arches. It seems that everywhere one turns, there’s another oddity caused by erosion in this area of particularly malleable layers of different kinds of rock. 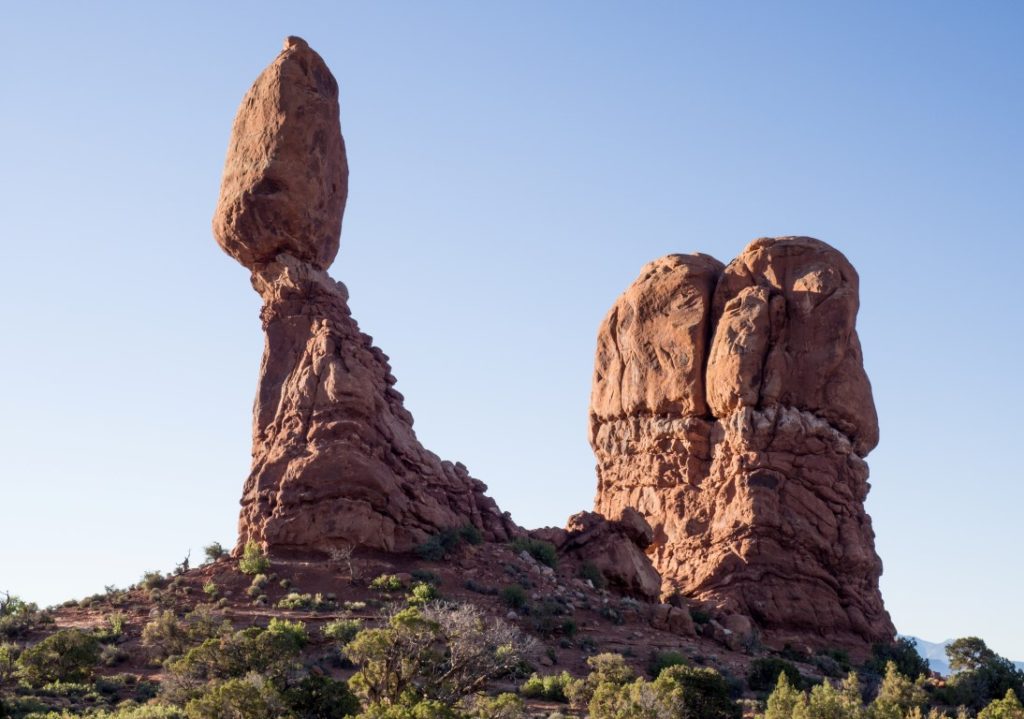 Seriously? This is called “Balanced Rock,” but while it may be balanced now, I’m pretty sure that in the blink of a geological eye, that sucker is coming down. 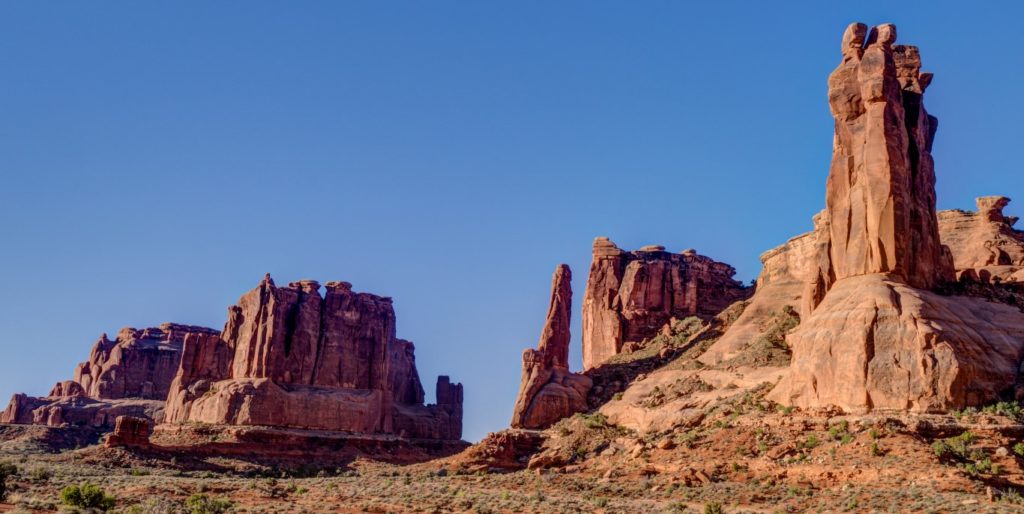 Spires and buttes and fins, oh my. One of the fun aspects of the park are the names they give to the formations. The three spires on the right, each with a rock perched on top, all angled as if huddling together, is called “The Three Gossips.”

And sometimes this place is just unspeakably beautiful. 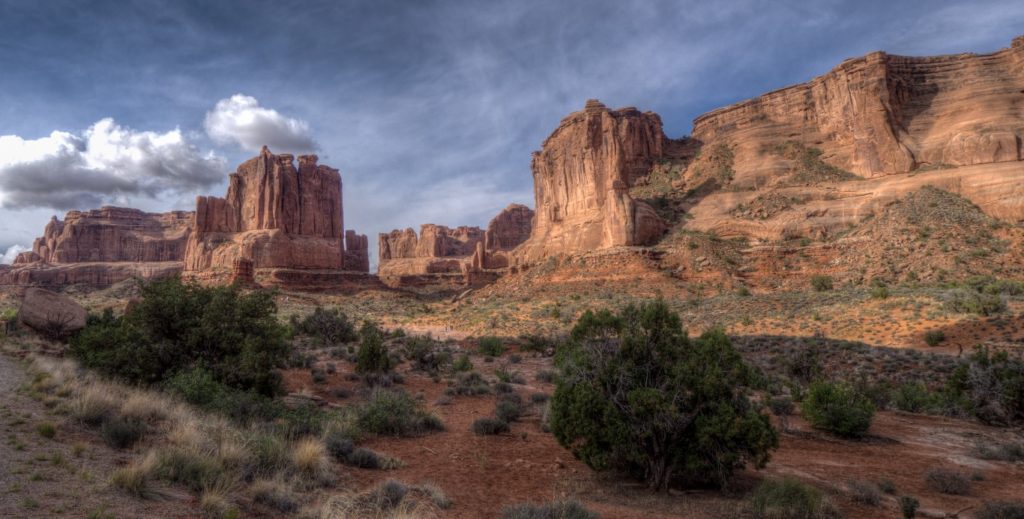 And, because I’m me, I did do my thing of getting up at 3:00 a.m. one morning and running over to get a shot of one of the arches (the North Window in this case) at sunrise. 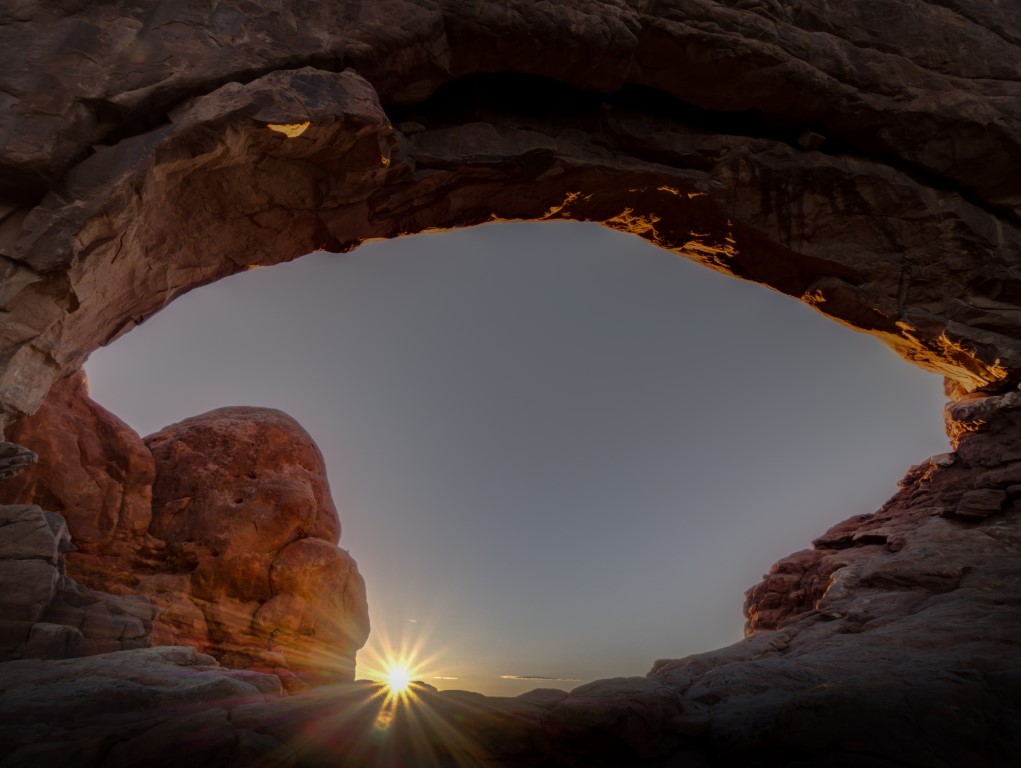 They’re not visible in this photograph, but just before sunrise about six or eight people wandered up, most of them not even photographers, and sat here at the arch just to watch the magic of the rocks turning bright orange as the sun climbed above the horizon.

So we had a great time at this strange and beautiful place. We did several hikes, attended a really great ranger-guided walk, all had several picnics, all the usual things, just in a place that is anything but usual.

But now for the bad news. Arches National Park is seriously overloaded. I mean like clogged-up, choking-on-itself, loved-to-death overloaded. 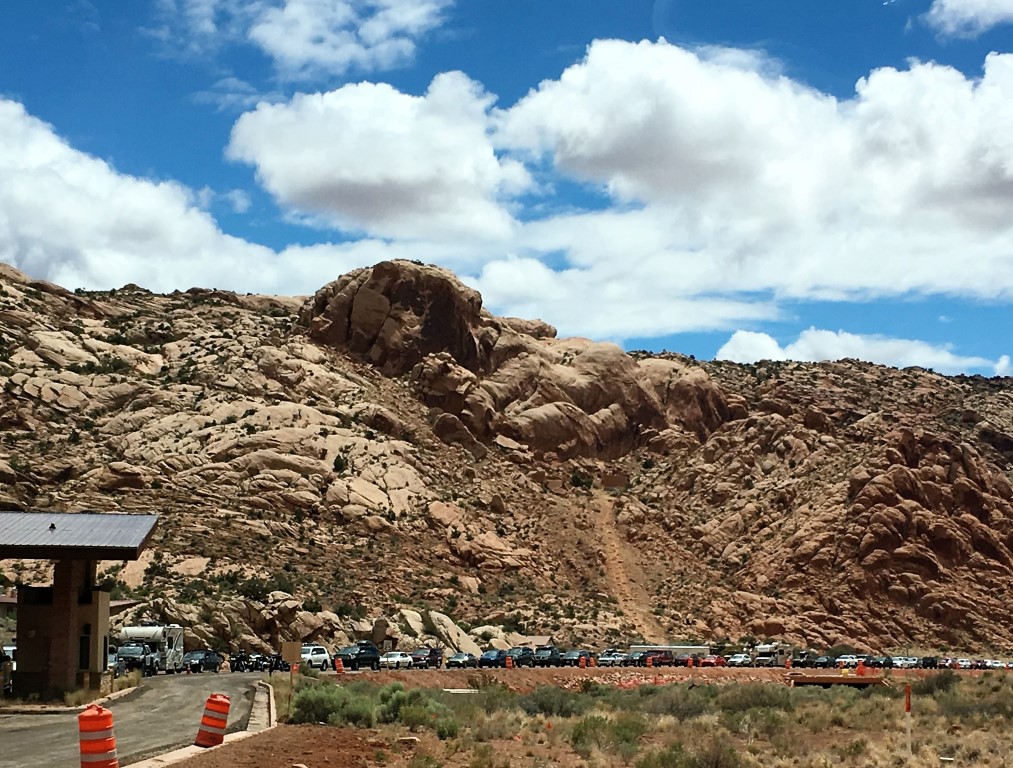 A L-O-N-G line of cars, nearly backing up onto US-191, waiting to get into Arches, and this was on a weekday. I bet it took an hour to get to the entrance station.

The problem isn’t the number of visitors, at least not in an absolute sense. Last year, Arches had about 1.6 million visitors, which isn’t large compared to other western parks like Grand Canyon (6.0 million visitors), Yellowstone (4.3 million), Grand Tetons (3.3 million), or even Glacier (2.9 million). The problem, at least as it appears to me, is that there are darn few places for those 1.6 million people to go. The result is that they congregate at a few locations, overwhelming the parking lots, turning the trails into something like urban sidewalks, and destroying the wildness of the place that presumably most of the visitors came to experience.

And the effect is compounded here by three factors: First, Arches is rebuilding its entire road network, and the park was closed Sunday through Thursday from 7:00 pm to 7:00 am. The upper end of the park, including the area around the famous Landscape Arch, is closed entirely. Second, there is a surplus of rental Class-C motorhomes like we have never seen. Hundreds, maybe thousands of them. And because the RV parking spaces are often filled with cars who couldn’t find anywhere else to park, the RVs park in the car areas, taking up 3 or 4 spaces, and the whole thing is a vicious circle. Finally, there seems to an unusual number of tour buses. At the Windows/Turret arches area, for example, there were FOUR (that’s right, count ’em, four) tour buses dumping people into a teeny, 100-yard path to the overlook. Plus, most of them were French, which made a bad situation even worse.

I understand that NPS is currently considering a management plan under which people, at least groups of people, will have to stake out a reservation slot to enter the park. That’s a terrible solution, but maybe better than the current situation.

As I said at the outset, the crowds weren’t really a problem for us and didn’t interfere with our enjoyment of the place. We usually get to where we going early in the day, and we head into the back country where there are fewer people. (Although here, perhaps due to a higher-than-normal proportion of fit, young people (dang them), even the trails had more people than we’re used to seeing. But, as you can see from my pictures, I was always able to capture the scene I wanted with no people in the frame, so things were never that bad.) So, it was a great stop for us despite the crowds. Combined with our excursions to Canyonlands (see the accompanying post), we’ll remember this place for a long time.