OK, traveling around in the west has convinced me that I am definitely going to take some courses in geology. We don’t have geology in the east. We have the Appalachian Mountains, but they’re nothing. Apologists for those mountains claim that millions of years ago the Appalachians were as tall and rugged as the Rockies, but I think they’re just embarrassed by the soft and flabby nature of the Appalachian Mountains so they try to explain away the mountains’ impotence by claiming that the mountains are old. Whatever.

Where was I? Oh yeah, geology. Out here, they have real geology. Manly geology. Capitol Reef National Park‘s claim to fame is a 100-mile long fold in the earth’s crust. Right. The earth’s crust just got all crinkled-up-like, lifted 7000 feet straight up, and now sticks up in the middle of nowhere. Unfortunately, it’s hard to get the full effect of this phenomenon except in an aerial view, so I swiped a picture off the internet: 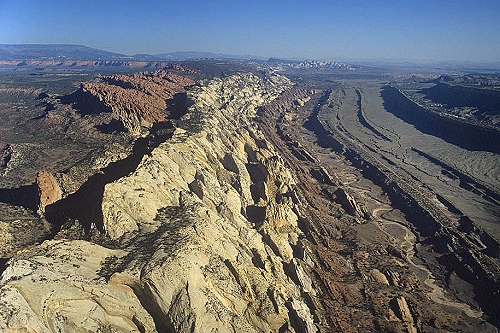 More of the same thing we keep seeing everywhere out west: unfathomable forces bend and twist the earth, then grind it down, then turn it weird. This is known as the “Waterpocket Fold.”

And the geology here is fascinating. As is our practice, we attended a ranger talk, this one on the geology of the area with the eroded cliffs of the Waterpocket Fold as a backdrop. 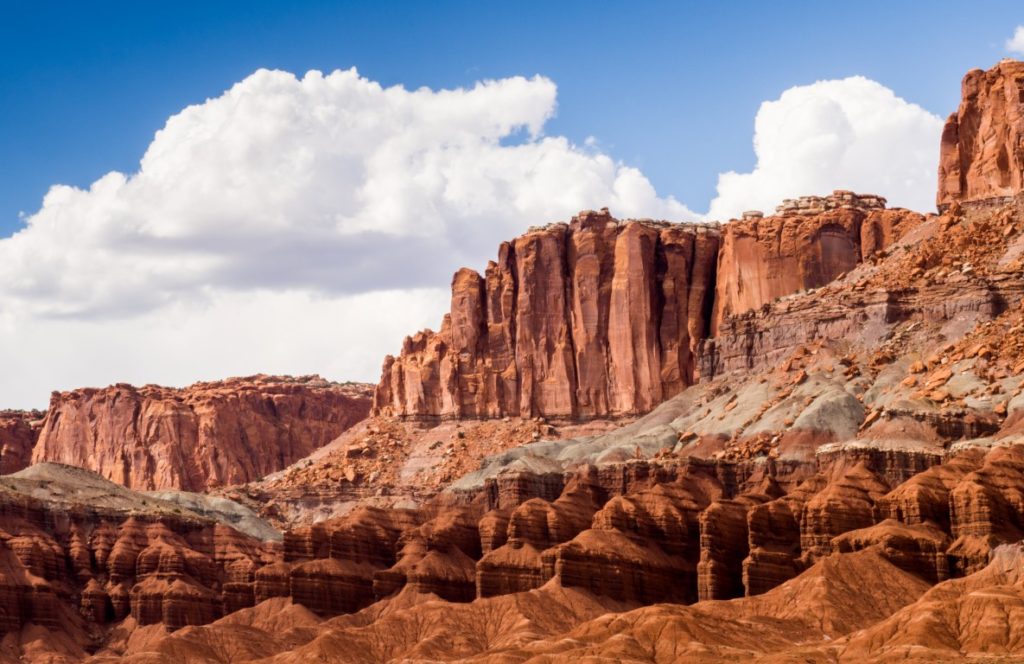 This was the backdrop for our ranger talk, clearly showing four of the various layers (of a dozen or so) that characterize the Waterpocket Fold.

Most of the interesting areas of the park can be seen along a scenic drive: 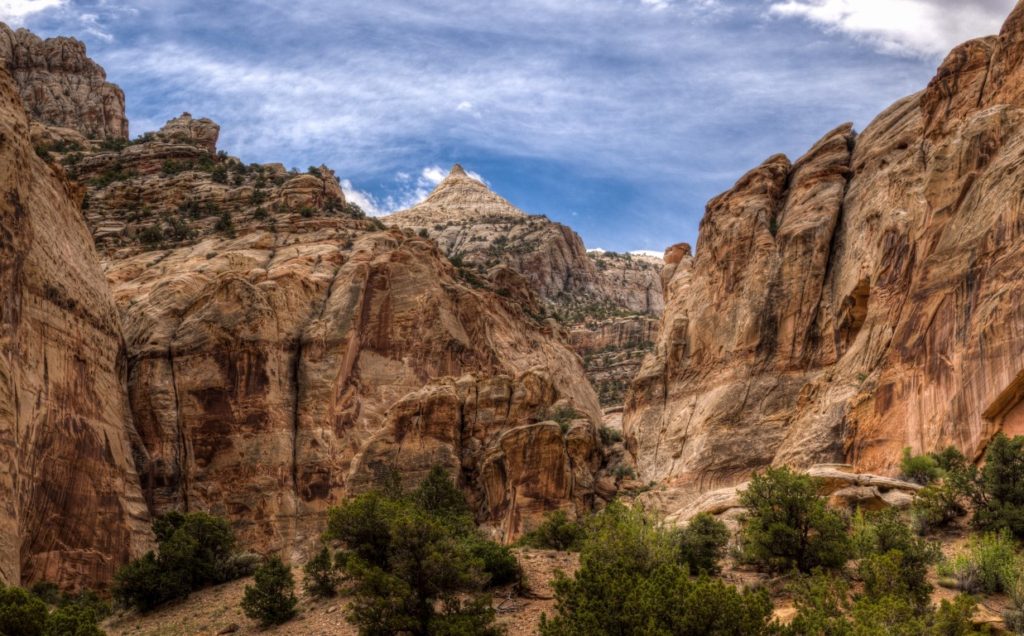 Just one of the many canyons along the 10-mile scenic drive inside the park. 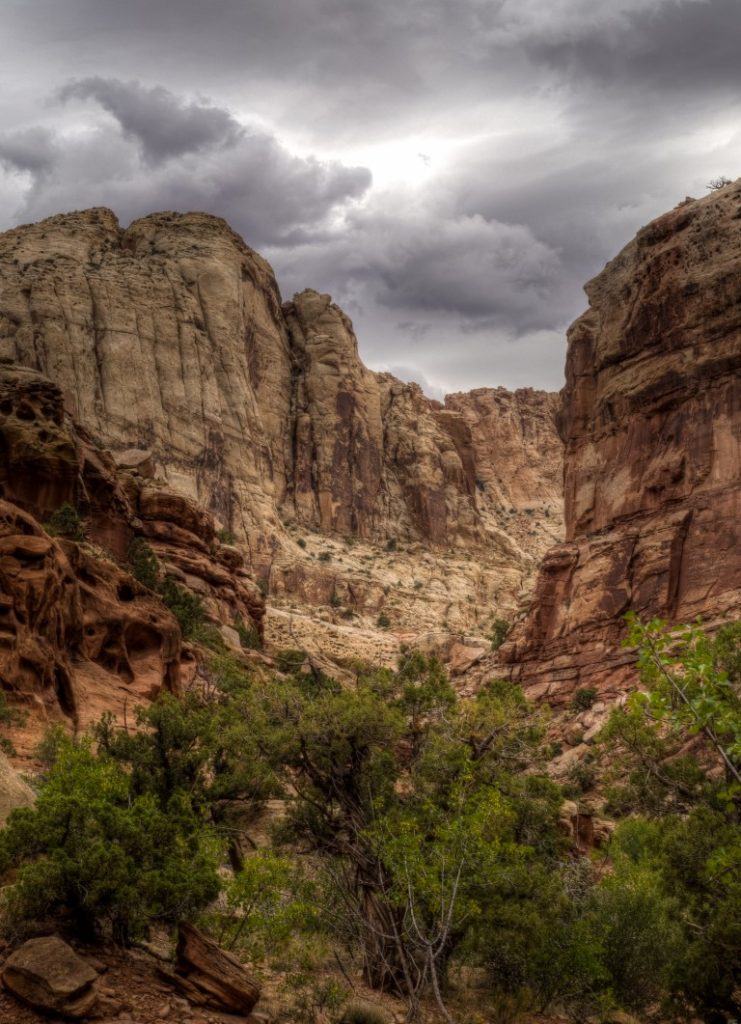 Driving up the Capitol Gorge Road. Believe it or not, there’s a road down there. Sometimes, the cliff walls are so close together that the road is barely wide enough for a single car. And until 1962, this was the only road into the area. 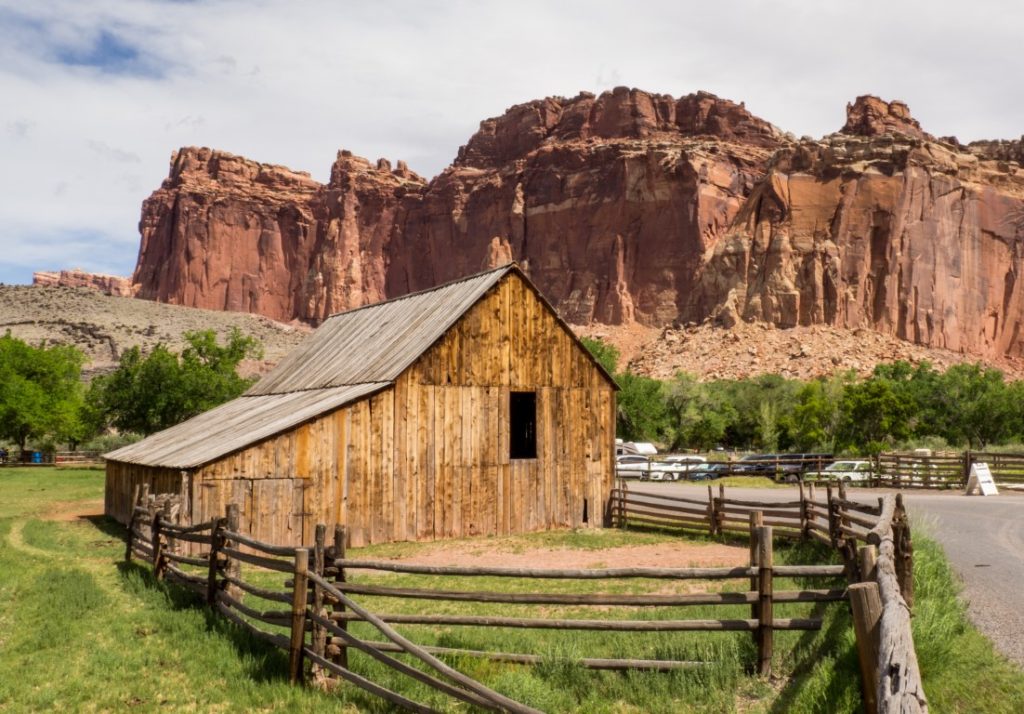 In the late 19th century, a group of about 10 Mormons settled the area. There was enough water that the Mormons could plant apple, peach, and pear orchards, which still survive to this day. But it’s hard to imagine living here. Mormons must be tough dudes. 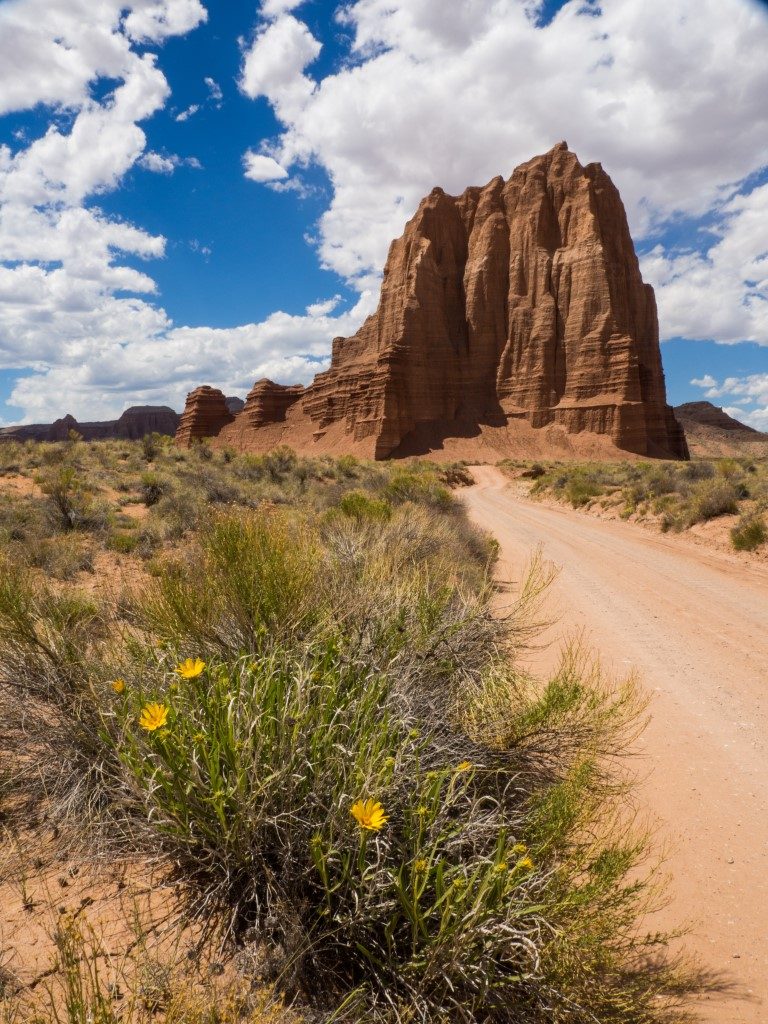 And, of course, because I’m me, I took off on a five-hour trek down a jeep road (which included intermittent stretches of deep, powdery sand) to get to the Cathedral Valley and snag this picture of the Temple of the Sun.

OK, so the geology is fascinating, but unless you’re a geologist, I’m not sure Capitol Reef is a great vacation spot. We sort of felt like we saw all we wanted to see in a day-and-a-half of touring around. Worth it, but not in the same category as Arches and Canyonlands.