Winter is upon us, so after properly preparing for our first long trip, it’s time to head to warmer climes. It’s a 10-leg trip, so here are the individual segments (with updates to follow as they occur):

And finally, after three weeks on the road, back to LaGrange.

It seems we spend a fair amount of time planning out various big trips we hope to make someday: a 2016 Grand Tour of the U.S. (80 days, 9700 miles, 19 National Parks and Monuments); an out-and-back trip to visit Robert at Joint Base Lewis McChord near Tacoma (6600 miles, taking 125 days, mainly because I’ve included a month in Washington, a week at the Rose Parade, and two months in Tucson); and of course our maybe-someday trip through Canada to Alaska and back.

But, truth be told, we’ve never really taken a trip longer than a week. Well, one: the trip we made to the White Mountains in New Hampshire back in the 1980s with the pop-up was two weeks. But basically all of our trips have been in the 3- to 5-day range. Until now.

We’ve mapped out and will soon start a 10-stop, 22-day, 2100-mile circumnavigation of Florida: down to Walt Disney World to meet up with the Little Darlings for 5 days, then down the east coast of Florida, out to the Keys, then the Everglades, then back up the West Coast. 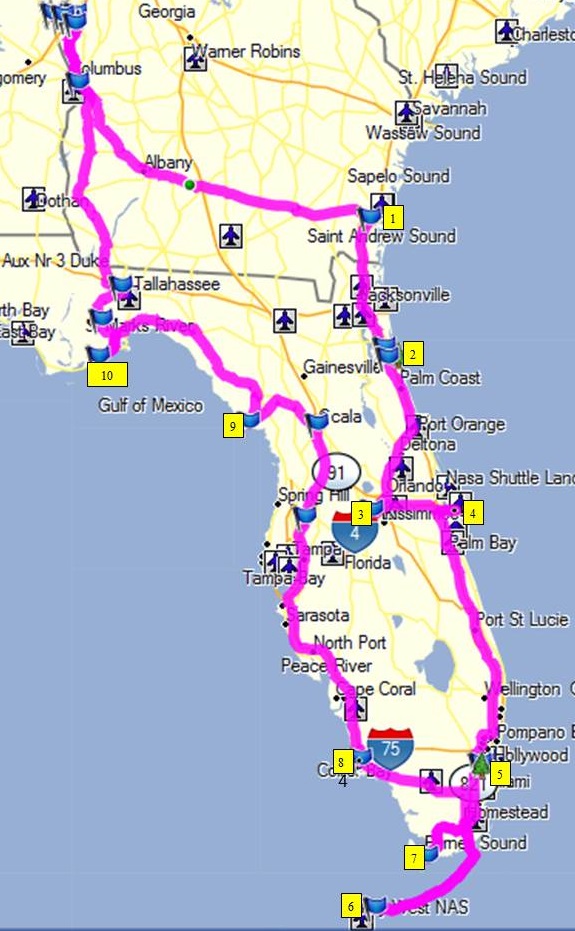 There is much that makes this trip exciting besides the fact that it’s our first L-O-N-G trip, mainly that we’re learning how to make a series of overnight-stops; what it’s like to have to toad along with us at each of those; how to deal with the dogs and various onerous pet policies; how to handle restocking, maintenance, and chores; what a real budget should be for such trips; and how much sightseeing and touristy things we can really manage. We plan on coming back much smarter than we are now. But mainly we plan on being warm for a few weeks and having a great time.

This is the 13th year for me in doing these annual charity hunts, save just a couple years here and there where I missed the hunt for one reason or another. Son #1 was able to come again, for his fifth consecutive trip! I feel the start of generation-spanning tradition here! Son #2 is stationed at Fort Leavenworth, so he couldn’t make it this year–I’d say maybe next year, but next year he’ll likely be stationed somewhere out west, so this annual event probably isn’t in the cards for then, either.

Last year’s hunt began with the RV stuck in the mud; this year, the camping spots were high and dry, but with 1-1/2 inches of rain headed our way. Good grief–not again. Sure enough, as we were packing up to head out on Saturday, the ground was spongy and menacing–an RV trap waiting to happen. So, how to drive out of a camping spot where the motorhome would sink in the mud as soon as it rolled off the leveling blocks? We went to the nearby hardware store and spent 30 minutes wandering the aisles, hoping for inspiration. At last, it came! Carpet runner! The kind with the finger-punching spikes on the bottom. A piece 24-inches wide and 10-feet long (for a mere $27) would give us grip for the rear tires and could move us forward in five-foot increments. The process was complicated, and not worthy of recounting here, but suffice it to say that, in ground so mushy that a pickup truck needed four-wheel drive to extract itself, we were able to roll out the motorhome, courtesy of our invented system, with no trouble whatsoever.

And the hunting? Actually somewhat slow. The weather was unusually warm, and with a rain event of Biblical proportions, so perhaps that’s not to be unexpected. And Friday was so foggy that a nearby tree, ranged at 138 yards, would frequently disappear from view. Beautiful in a way, but with an eerie silence. 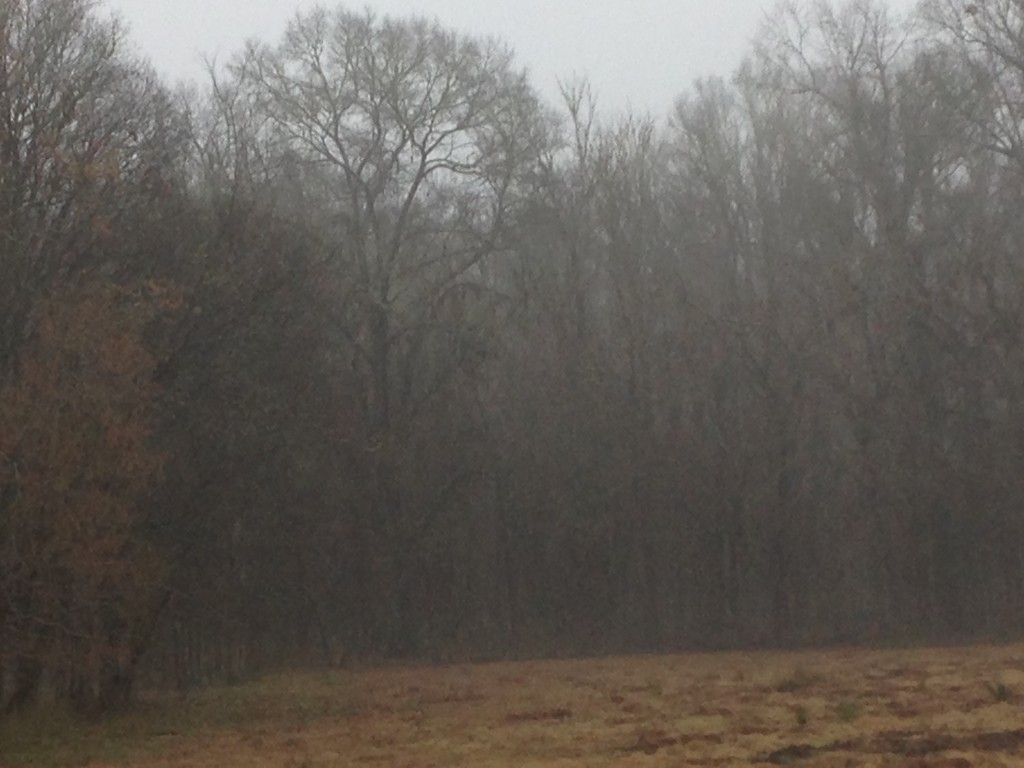 And why is it that one always sees turkey in deer season and deer in turkey season, but never the right species when it’s eligible? I mean, how do they know? 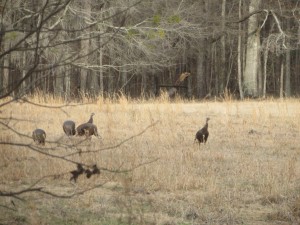 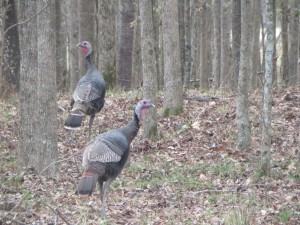 We did return with four deer–enough to keep us supplied with venison for a while. 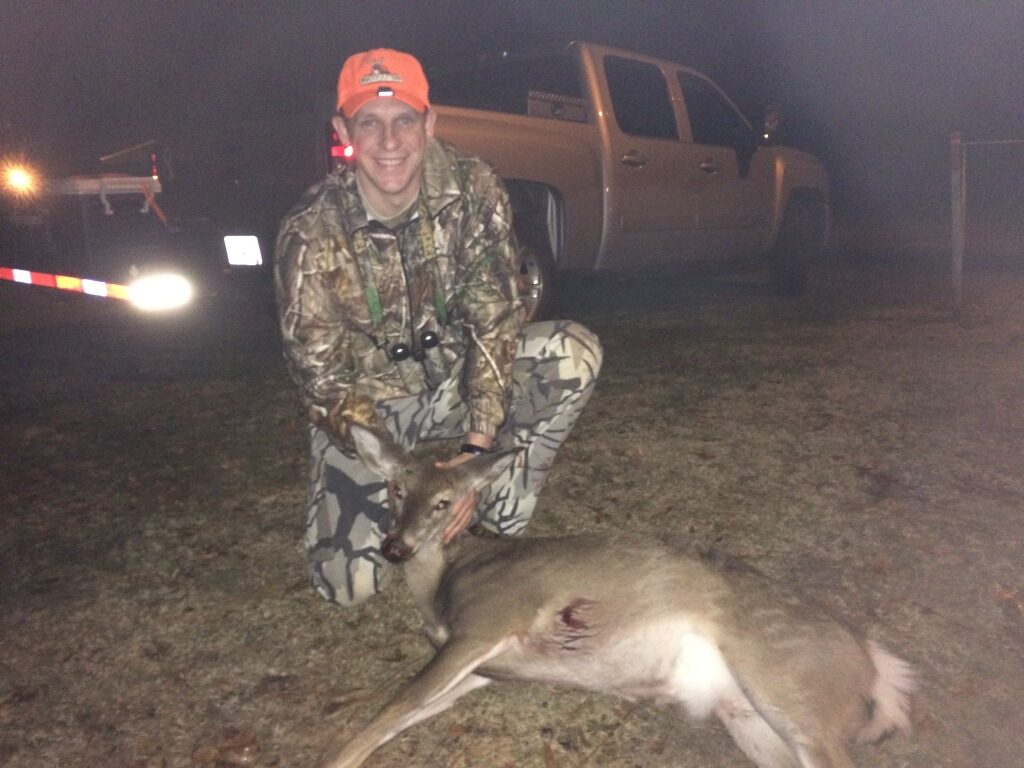 But there was a luckless ending: Right at last light, on the last day of the hunt, Cliff shot what we expect was a truly MONSTER buck! It bolted into the woods and although we could pick up its trail in the immediate vicinity, it was impossible to follow at night. Returning the next day, the trail disappeared into what must be hundreds of acres of swampy wetland–no way to follow the trail. We even tried a grid search in a 400m-by-200m (20 acre) area. No deer and no trail. Ugh. We’ve signed up for next year, and maybe the weather and the luck will be better then.