We have a dozen or so campgrounds within 30 minutes of our house, so it was only natural to make our first trip to one of those: easy to get to and easy to get back to the house if necessary. So we went to Holiday Campground, one of the many fine Corps of Engineers campgrounds at West Point Lake. And the verdict on our new ACE 30.1? Wow! Everything about it is completely perfect.

The unit fits nicely in a Corps-sized site: 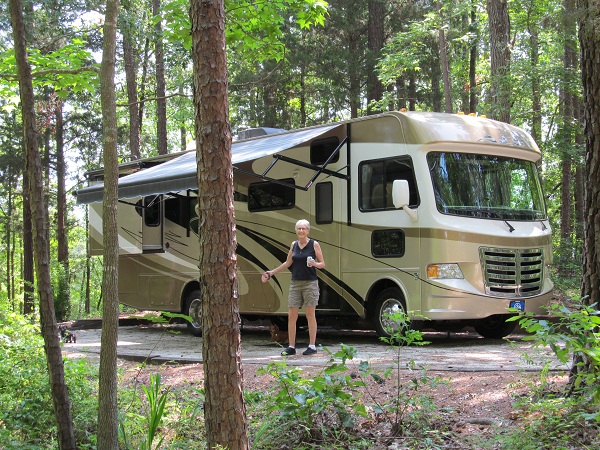 Even Sally, the wonder miniature long-haired Dachshund, likes it: 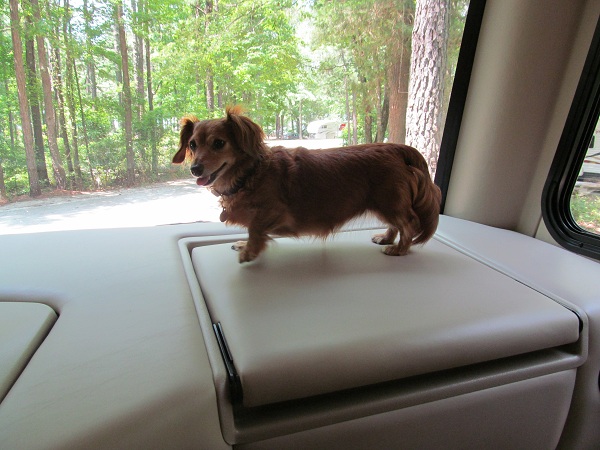 So we spent the weekend exploring Ace’s features (OK, so we gave our RV a name and its name is its manufacturer’s model name … pretty lame), reading manuals, and trying to understand those systems that were completely new to us (like levelers, generator, etc.)

OK, so it’s not really “the start.” We’ve been RV’ing for 30+ years. But it
is the start of our RV’ing adventures in a new motorhome, a 2013 Thor ACE
30.1, which we expect to use in retirement, once we get there, if we
ever do. Or maybe we’ll switch to something different, but for now it was exactly the right choice for us for several reasons:

Layout:
2 slides to make it livable when camped, but with everything we need
easily accessible without putting out the slides. TV across from the
couch–we don’t watch a lot of TV while camping (although we do watch
videos (mostly Jack Ryan and Jason Bourne movies)), but nearly all
units nowadays have the TV mounted sideways from the couch. Like, why? Enough
counter space. Enough storage. A bathroom that can be closed off from
the living area. When we toured the ACE 30.1, Wendy said it was
obviously the first RV she’d ever seen designed by a woman. Enough said.

Class A category. Just a couple months prior to getting the
ACE 30.1, we had purchased a Coachman Catalina 27′ trailer. We liked it
just fine (well, not really, but that was a fact we didn’t discover
until after our first trip), but we discovered that we’re getting old.
Now, that’s news. But one consequence is that it was impossible to
spend long hours in a pickup: too cramped and too immobilized. The ACE
30.1 is really a Class C frame and engine with a Class A body, but that
distinction didn’t matter to us. It was the Class A driving experience
that it provided that was an essential factor.

Size. Everything in an RV is a tradeoff, and the overall size is no
exception. But we camp a lot in National Parks, Corps campgrounds, and
so on, and the bigger the unit, the more difficult it is to find
sites.

The size factor is worth saying more about. We’re not big fans of “RV Campgrounds,” at least in the sense of full hook-up, check-and-jowl, parking lots. We’d much rather be out in the woods. But many of the best campgrounds have campsites that have surprisingly small size limits. In Rocky Mountain National Park, some of the campgrounds have a size limit as small as 30 feet. In Yosemite, with only a few exceptions, the size limit is 35 feet. Things get even more restricted in National Forests. In Sequoia National Forest, for example, many campgrounds have size limits as small as 20 feet and only a few can accommodate rigs as big as 45 feet. Thirty feet seems to be the limit if one wants a fair selection. Ditto Corps campgrounds. Ditto state parks.

Someone once said that the rule is: “Get the smallest unit you can comfortably stay in for the longest time you expect to be gone.” That sounds right to me.