Now that both sons are campered-up, we thought it would be appropriate to get all three RVs in the same place. With Son #2 still at Ft. Leavenworth, and us in Atlanta, a rough half-way point is Land Between the Lakes National Recreation Area, a little-known national treasure consisting of over 170,000 acres federal land dedicated to every kind of outdoor recreation one can think of. We’d all been here back in 2007 (when both sons were with the 101st Airborne stationed at Ft. Campbell). 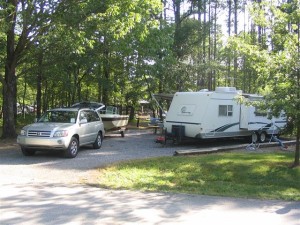 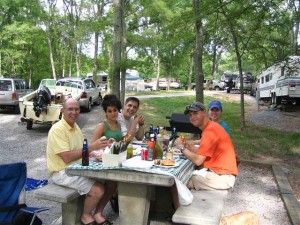 Piney Campground, Land Between the Lakes (2007) 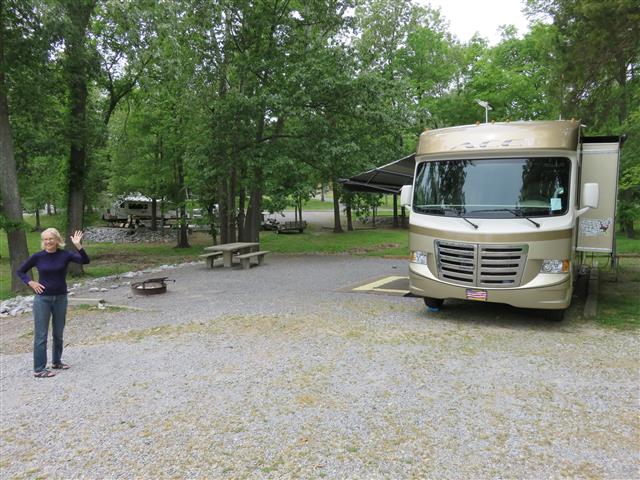 Except that the 2007 trip was pre-K, as in “pre-kids.” So how would it work out with four little darlings, ages 2 to 6? On Thursday, May 14, Son #2 arrived from Leavenworth (although much later in the afternoon than planned), with Son #1 not due in until tomorrow, so the first afternoon was basically just hanging around, playing in the water and exploring the “secret fort” in Grandpa’s camper… 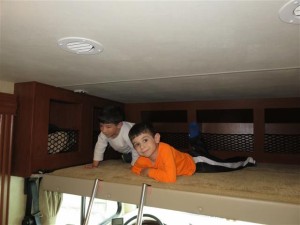 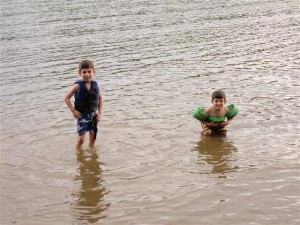 …until we were confronted with the truth of God’s plan that we are made male and female, and little boys are just different than little girls. Proof? Consider this. If you’re walking along the shore and find a disgusting, half-eaten, rotting, alligator gar, covered with maggots, what do you do? 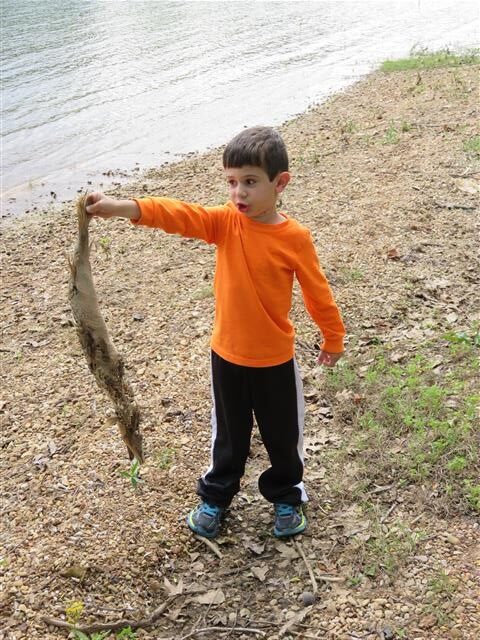 Right … if you’re a little four-year-old boy, you pick it up and bring it around to show all the grownups what you’ve found (which, incidentally, made Mom throw up in her mouth).

Next day, Son #1 shows up, and we are all set up, three-in-a-row, ready for three days of fun in the sun! 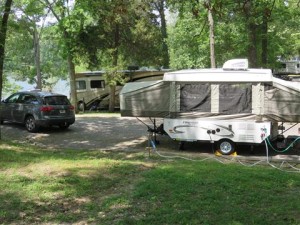 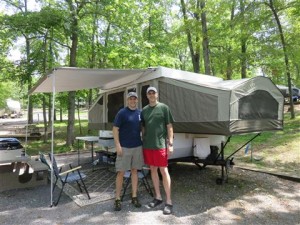 Just one problem with the fun-in-the-sun plan: the sun. They had been forecasting pretty heavy rain and thunderstorms for whole weekend, but we decided to blaze on anyway, mostly because the likelihoods kept bouncing around, and the heaviest rains weren’t supposed to hit us anyway, and, well, whatever. On Friday night the storms hit, and they hit hard. So, we decided we had to serve up dinner and entertain the LDs in Ace, all five grown-ups, four kiddies, and three dogs. Fortunately, we had movies, good food, and Ace handles t-storms pretty well. 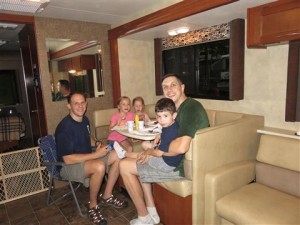 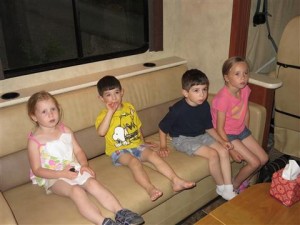 Next day, still raining (and forecast to continue to mid-afternoon), it was off to the planetarium and nature center. 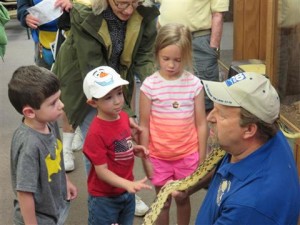 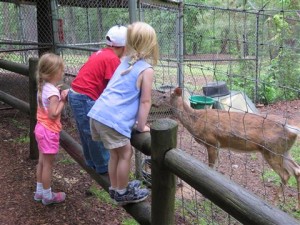 Then back to Ace for lunch (inside again, still rain-bound), nap time, and then when the weather cleared, burgers, mac-n-cheese, and s’mores. And in the midst of that, we were treated to one of those moments that drives home the truth of the adage, “Whatever adults can plan, children can plan around.” With large areas of the campground pretty much mudded-up, the kids decided that nothing could be better than stomping, kicking, and sliding around in the drainage ditches. 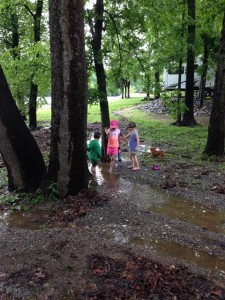 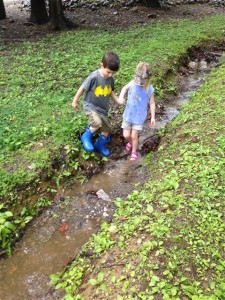 But I guess that’s the point. There’s a lot to like in a trip like this: the camping itself, a great place like LBL, a chance for the two brothers to get together one last time before they’re on opposite ends of the country,  more time for the cousins together, and, of course, whatever that magical thing is about kids in the woods. But, as I noted in my last post, the best part may be the virtue for children of disconnected time. I’m pretty sure that no parent ever said, “Hey–I know you’ve been shuttled from one planned environment to another for the past month, so let me make up for it by sending you out into the woods to stomp around in a sloppy drainage ditch.” But while camping, that’s not only OK, it’s the essence of the experience, in fact there are no other options, creating a memory for the kids that will stay with them forever.

In a previous post, I recounted the long history our family had of camping as our children grew up, and noted with some satisfaction that Son #2 had carried on the family tradition by buying his own pop-up camper. Now, Son #1 has followed suit with his own pop-up camper! And started his own camping blog, kazadventures.com, which is a great read. 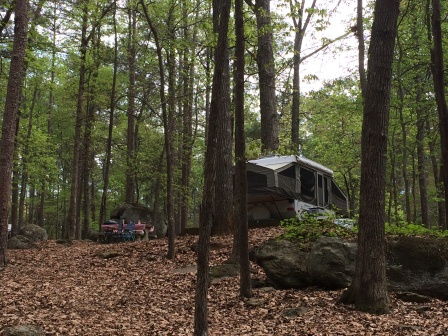 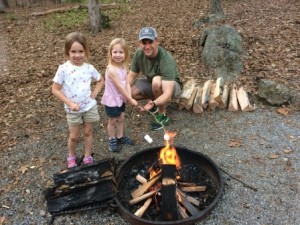 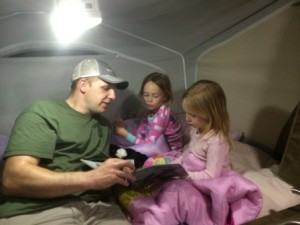 All of which got me thinking. What is it about “camping,” in whatever form, even “camping” (such as it is) at Fort Wilderness, that holds this lasting quality? There are the obvious attributes: it’s a break from “real life,” it’s an encounter with nature (even if it’s only fishing in a pond or digging up worms), it’s family time (including time with the dogs). It’s sometimes just a chance to be uninhibited–we would ride our bikes around the campground in various fighter jet formations: finger-four, to single echelon, to diamond, and then, when someone was ready to stop, we’d buzz our own campsite in “missing man” formation. In any place but a campground, acting like that would get you a visit from DFACS. And, frankly, one main motivation for us was that camping is affordable; the overwhelming majority of our camping trips consisted of a 50-mile hop up to the Corps campgrounds at Lake Lanier. Twenty bucks for a weekend and we had an instant “vacation.”

But one other thing comes to mind, something that was true then but even more so in today’s world. Camping provides a chance to disconnect from one set of experiences and reconnect with others, more basic and, in today’s world, less virtual. Sometimes the reconnection is trivial, sometimes it’s deeply spiritual, and sometimes it’s both at the same time. Camping dispels the myth of “quality time.” Often life’s best and most memorable experiences don’t arise from highly organized, regimented, mandatory fun-drills; they occur spontaneously when you’re just goofing around doing not much. On one son’s first backpacking trip, we stopped for a break to take off our boots and give our feet a rest, and he looked up at me and said, in a way that only an eight-year-old can, “Dad, have you ever noticed how great it feels to take off your socks?” In a sense that’s the mission of a camping trip: a chance to get away and spend time, so to speak, taking off your socks.

Three sets of the family campers are scheduled for a link-up at Land Between the Lakes NRA over the weekend of May 14-17. (Daughter and her crew are tied up that weekend, but there will be others for that branch of the family.) So, with four Little Darlings, ages 2 to 5, in three adjacent campsites, the virtue of camping continues on.