I carry with me the idea that one benefit of a motorhome is that visits to see relatives, or go to weddings, or attend college graduations, or whatever, can be handled with a road trip. No need to bother with the air travel, hotel, or rental car hassles, I can just jump in ACE and follow my nose. This trip: a test-of-concept trip to see our son whose employer has sent him off on a 6-month stint in Port Arthur, Texas. It’s a good test of my idea, I think, because (no offense intended) my pre-planning evaluation of the Beaumont area leads me to believe I’d never want to visit the area otherwise. So, the test is this: which of the following three options is best: (1) a road trip in ACE, (2) the same road trip but driving a car and staying in hotels, or (3) the air-travel-hell alternative? (That might telegraph that I’ve prejudged at least one of the alternatives.)

Biloxi is just about exactly half-way, and it fits into our 3:00/300 Rule, so first stop-over was at the Majestic Oaks RV Resort. And how does it rate? I posted a review here, but the bottom line is that it’s just a “7” in my book: it’s OK for an overnight stop, but not more. Fortunately, all we wanted was an overnight stop. 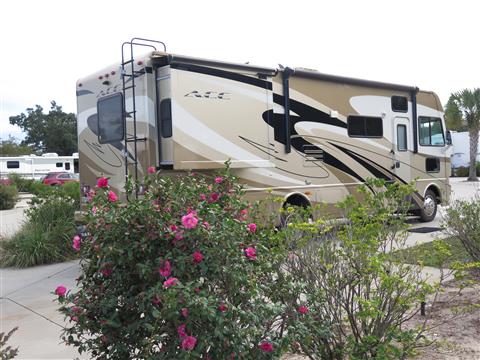 What a trip! The drive from Biloxi and into Louisiana was uneventful, and we found the scenery (mile after mile of swamps and marshes) completely interesting. And we were really enjoying the progress of the miles until we hit Mile Marker 121 in Louisiana. At that point, we encountered the worst road conditions I have ever experienced. The junctions between concrete road segments was so abrupt that the motorhome was being shaken to pieces, I could barely control the vehicle, and the dogs were literally being thrown into the air, so much so that they were cowering and shaking, obviously suffering from PTSD (post-travel stress disorder). We slowed to 40 mph, but it didn’t help, and we eventually got off the freeway looking for an alternate. Even on the off-ramp, though, creeping along at 10 mph, the motorhome was being violently launched upwards. Finding no easy alternative, we had no choice but to return to I-10, where that traveling hell continued until around MM 104, at which point the road conditions subsided and we were able to continue on at normal speed. One lesson, though: I definitely will get softer shocks!

Eventually, we made it to our weekend destination: Gulf Coast RV Resort in Beaumont. If Majestic Oaks was just a plain “7,” this place is one step down: just a plain “6.” My review is here. 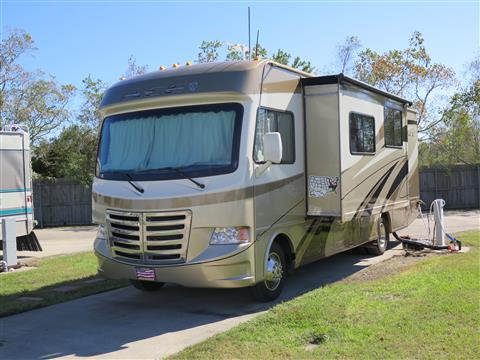 But we didn’t come here for the resorts. We came to visit our son, and on that count the trip was a stunning success.

Friday night, Cliff took us to a local place recommended by one of the guys at the facility: the Neches River Wheelhouse, located down an improbable series of teeny, dark roads. Important safety tip #1: if guys who have lived and worked in an area for years say that a particular restaurant is the place to go, go there. We started off with the “pistolettes” (a split-top roll fried & stuffed with crawfish and some special pistollette sauce), followed by fresh redfish (blackened & topped with crawfish & shrimp in a creamy tasso ham sauce)  and other local favorites. 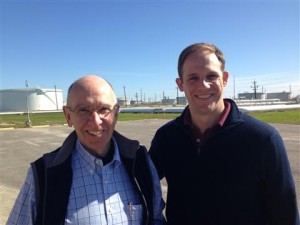 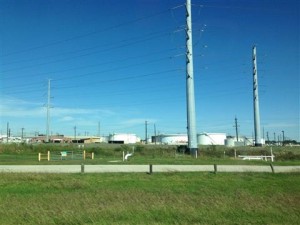 What set the area apart, though, was downtown Port Arthur. Words really can’t describe the decay and blight of the area, and I was so fascinated by the scene that I neglected to take a picture. Block after block of boarded up structures, buildings with the roofs caved in, even a majestic old hotel ready to collapse in on itself. Absolutely nothing survives. We remarked that Hollywood could make a post-apocalyptic movie in downtown Port Arthur without having to construct any sets. The Wikipedia article puts it thusly: “The commercial center of Port Arthur was at its peak in the early 1900s. Together with the effects of suburbanization, which drew off wealthier residents to new housing away from town, gradually taking businesses with them, from 1960 until 1974, successive waves of economic recession caused much distress in the town.  … [Then, in 2005,] Hurricane Rita struck a direct hit on the Proctor Street Seawall, and damaged many downtown businesses and homes.”

After returning to ACE to feed the dogs, and watch a little bit of the Dawgs game, we came up with a plan. Again, one of Cliff’s colleagues recommended Stingaree, a seafood joint out on the end of the Bolivar peninsula. Now convinced of the validity of Safety Tip #1 (see above), there were two ways to get there: the fast way (down the east side of Galveston Bay), or the long way (down the west side, to Galveston itself, and then via a ferry to the peninsula). Since Cliff had never been to Galveston, the correct choice was self-evident: Galveston, here we come.

Crossing over Galveston Bay on I-45, one is “treated” (if that’s the right word) to a aerial view towards Houston of mile-after-mile of refineries, chemical plants, tanks farms, and other necessities of our industrial economy. And then it’s Galveston itself, which is, I guess, the Texas equivalent of Panama City Beach. We stopped by Galveston Island State Park to see how it compared to Florida state parks, but found little to warrant a special trip there. So, off to the ferry for a quick ferry trip (18 minutes, although preceded by an hour-long wait) to the peninsula. 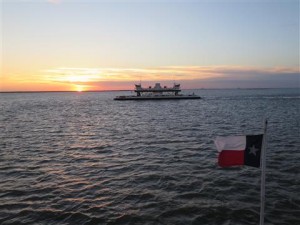 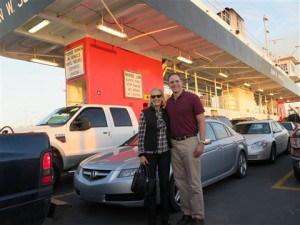 And then to Stingarees for dinner. And once again, a truly wonderful meal: seafood gumbo as an appetizer, fresh Gulf snapper with etouffee sauce, pecan-crusted snapper, and honey jalapeno shrimp. And a bit of key lime pie for dessert.

Then, back to ACE, goodbye to Cliff, and beddie-bye time for an early departure the next morning. Once again an overnight stop at Majestic Oaks, and then home.

Truly, this was a great and wonderful trip. Getting a chance to see where Cliff lives and works, the best and the worst of the area, was well worth it, even more so because it came with an excuse for a road trip. And, back to the question that started this post: which of the three alternatives is the best? The answer is 100% clear, no doubt: a road trip in ACE. Lodging costs are less, the food is better, and traveling by motorhome is WAY better than traveling by car.