Right after the FMCA convention, we headed across the street to the Fair Harbor RV Park for a gathering of the FMCA Amateur Radio Club. What a great time! Fun people, interesting conversation, and a lot of time to talk about how to operate portable from the MH.

My radio setup consisted of an IC-718 (temporarily, pending moving my IC-706MkII-G out of the truck), an LDG AT100-Pro autotuner, and a Samlex 35 amp power supply, all of which was mounted in a custom box that also serves as my portable setup, such as on Field Day. 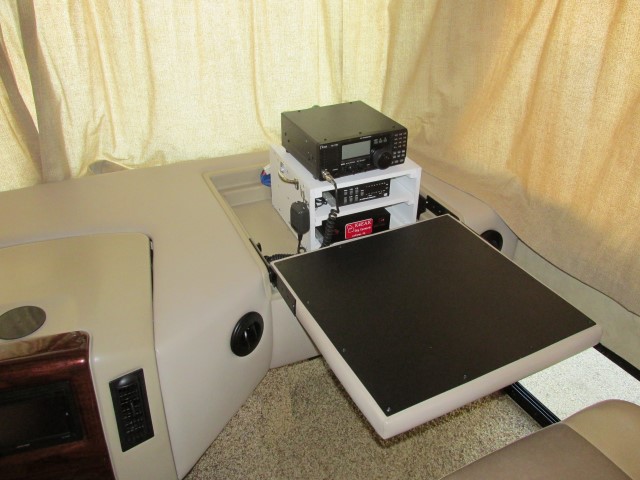 The setup fits quite nicely in the fold-out desk on the passenger side (my computer goes in front of the box) and I simply run the coax out through the window and to the antenna. This works just fine and, with headphones, I don’t disturb the XYL.

I’ve been thinking that using a simple hamstick dipole (or maybe a BuddiPole) is the way to go … acceptable performance, no worry about insolvable RF ground problems, and easy enough setup and takedown. I have a 15′ expandable painter’s pole with the hamstick adapter mounted at the top. So, all I would have to do is screw in the hamsticks, attach the coax, and mount the painter’s pole in the flag pole mount already attached to the MH ladder. 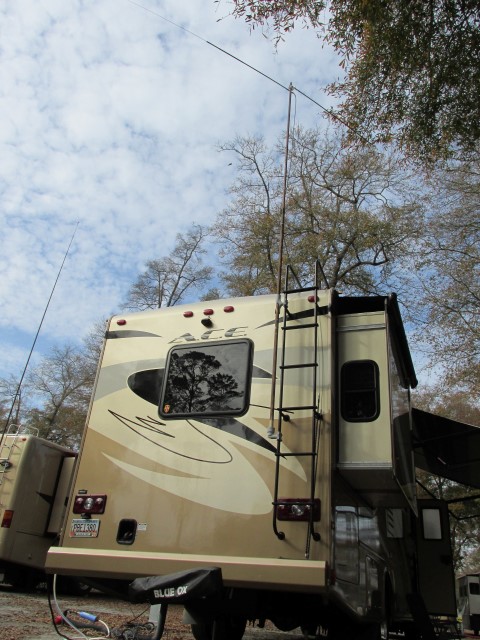 I operated that way on 20m for a few hours and got about a dozen contacts, including W1AW-New Mexico (!). 40m didn’t seem to work as well (barely made contact with the RV Service Net), but that may have been an imbalance in the two sides of the antenna. Further investigation to follow. After talking to folks here who know a lot more than I do, I’m convinced that is indeed my best option, at least for a while.

Dateline Perry, Georgia — FMCA Convention: I know I’ve said these kinds of things really aren’t my cup of tea, and they really aren’t. So, exactly why am I here again, along with 2500 other motorhomes, in yet another version of a geriatric Woodstock? 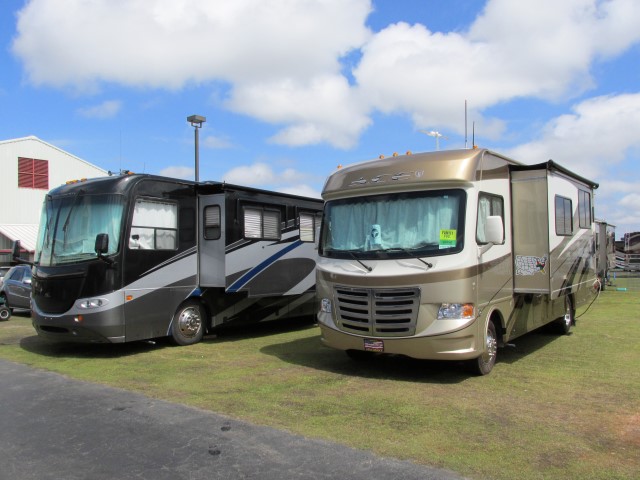 The main reason is that we’re here to sign up for a trip of a lifetime: a two-month tour of Canada and Alaska. Because we are who we are, though, that means that we have to research to blazes out of the options, attend half a dozen seminars to flesh out the alternatives, then meet with the tour organizers with an endless series of questions, and then, and only then, sign up. To do all that, well, it helps to be here.

The Alaska trip itself is pretty amazing. 60 days through Canada (including the Calgary Stampede), then up through Alaska, then back down through British Columbia:

There are approximately infinity things to do on the trip, many of which can be found at RV Fantasy Tours – Alaska. We’ll tweak the pre-planned list of activities somewhat; for example, we’ll probably want to spend more time in Denali National Park and less in Fairbanks, and I expect we’ll want to do a “flightseeing” trip to one of Denali’s glaciers.

As good as that should be, getting there and back should be just as good. We’ll hit Badlands National Park, Devil’s Tower NM, Little Big Horn NBF, and Glacier NP on the way out. Then Victoria BC, Olympic NP, Mt. Ranier NP, Yellowstone NP, Glacier NP, Zion NP, and Grand Canyon NP on the way back. Plus too many other wonderful places to count.

13,300 miles over a course of three months, seeing a substantial fraction of what’s worth seeing in Western North America. Wow.

The entertainment this year was unbelievably good. On the first night, we were treated to a comedienne Jeanne Robertson, whose descriptions of her husband (whom she calls “Left Brain”) sounded a little too familiar. The third night was Sarah Getto, a wonderful singer-musician, whose personal accomplishment is one of the most inspiring and incredible stories I’ve ever heard. And in between those two, we were dazzled by The Texas Tenors. I had heard that they got more votes on “America’s Got Talent” than any other vocal group in history, and I believe it. But I can’t describe their music. It’s an improbable combination of opera (one has to hear their three-part version of Nessun Dorma), pop, show tunes, and country music (done by people who can actually sing), all in one show. Amazing. Go buy their albums to see what I mean.

Oh yeah … we also (almost) bought a new motorhome. Really. Got perilously close. It started out just seeing what a slightly larger, diesel-driven version of our ACE would be like (a Thor Palazzo 33.2). And it would be very nice indeed. So, we said thanks very much, and the dealer started throwing money at us. Eventually the amount of cash out of pocket that it would take was potentially doable. But the real consideration came down to a simple question: “Which do we want more? A slightly bigger, slightly nicer motorhome, or the money to take more trips in the motorhome we own now?” That cinched it.

So, will I do another one of these things? I keep saying no, but now I’m not so sure. Two things happened that made me wonder whether I may be in the right place after all. Before the first night’s entertainment, while making the usual scheduling announcements, the MC said it would be appropriate to thank the veterans in attendance and asked the veterans to stand. Of the roughly 2000 men in the audience, well over half, maybe two-thirds, stood. And then, on the second evening, the Texas Tenors did their version of Lee Greenwood’s “I’m Proud to be an American” and everyone, I mean everyone, stood up. I don’t know — maybe these are my peeps after all.