Normally, I’m not big on caves, which have always impressed me as nothing more than big, rocky holes in the ground, and even if they have the usual assortment of formations, all properly lit up, the experience wears off in a few moments and I’m back to being trapped in a big hole. So, the main attraction in heading to Carlsbad Caverns was less the caverns than seeing the bats, which emerge from the cavern every night at dusk, and which I’ve heard about from Wendy and the family ever since they visited there in 1988.

First, I was wrong about the caverns. Like, embarrassingly wrong. (No wonder no one ever listens to me.) Carlsbad Caverns is definitely not just a big hole in the ground. Actually, it is a big hole in the ground, but it’s so big, and so complex, and so stunning in its visual impression that it nearly defies description. We did one of the self-guided tours (we got there too late for a guided tour), which took us into the caverns for a loop of about 2-1/2 miles, starting with an 800-foot descent on a switch-backed trail through the main entrance, and eventually into the “Big Room.” 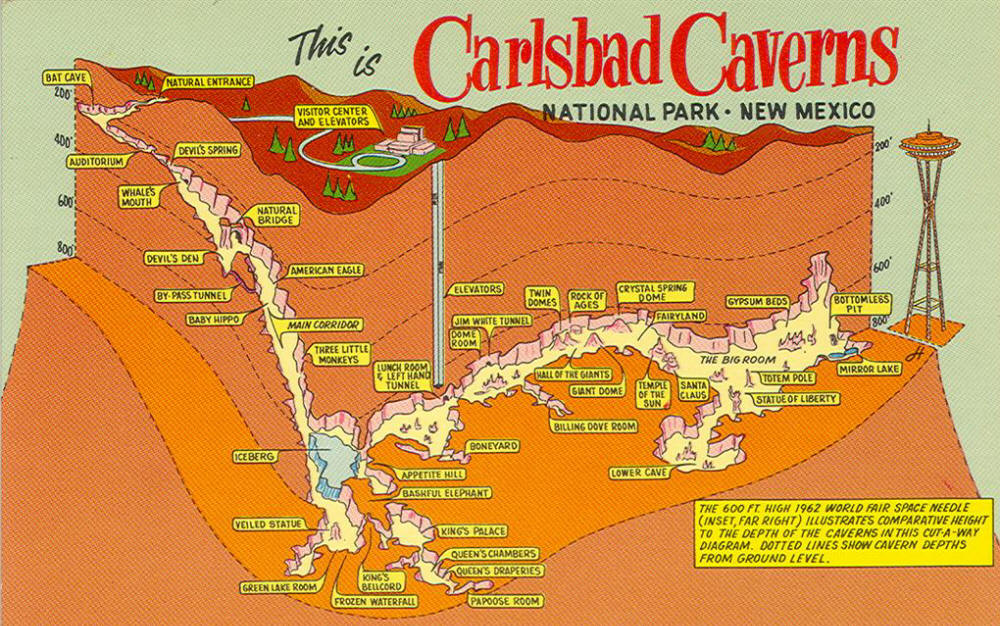 This is some dippy retro post card that I found on the internet, but it’s the best depiction I found of the layout of the caverns. The self-guided tour, about 2-1/2-miles long, enters down the “natural entrance” on the upper left, all the way over to the “Big Room” on the far right, and then back to the elevator for the 750-foot lift back to the surface.

The “Big Room,” for example, although it’s just a teeny part of the caverns and just one part of the self-guided tour, is huge: big enough to put the U.S. Capitol building in there twice! At one point, it’s 250 feet tall. One side loop around the Big Room is a mile long! This part of the cavern system is only one of about 100 such caverns, most of which have never been explored. In 1986, some guys accidentally discovered a side-branch to the cavern system, and so far they’ve explored it for 150 miles. As the short film in the visitor center pointed out, it’s hard to find any place on the surface of the earth that isn’t fully explored, but beneath our feet, literally, we haven’t even begun to explore our own world.

And somehow the National Park service has managed to install paths, and handrails, and lighting throughout this portion of the caverns. 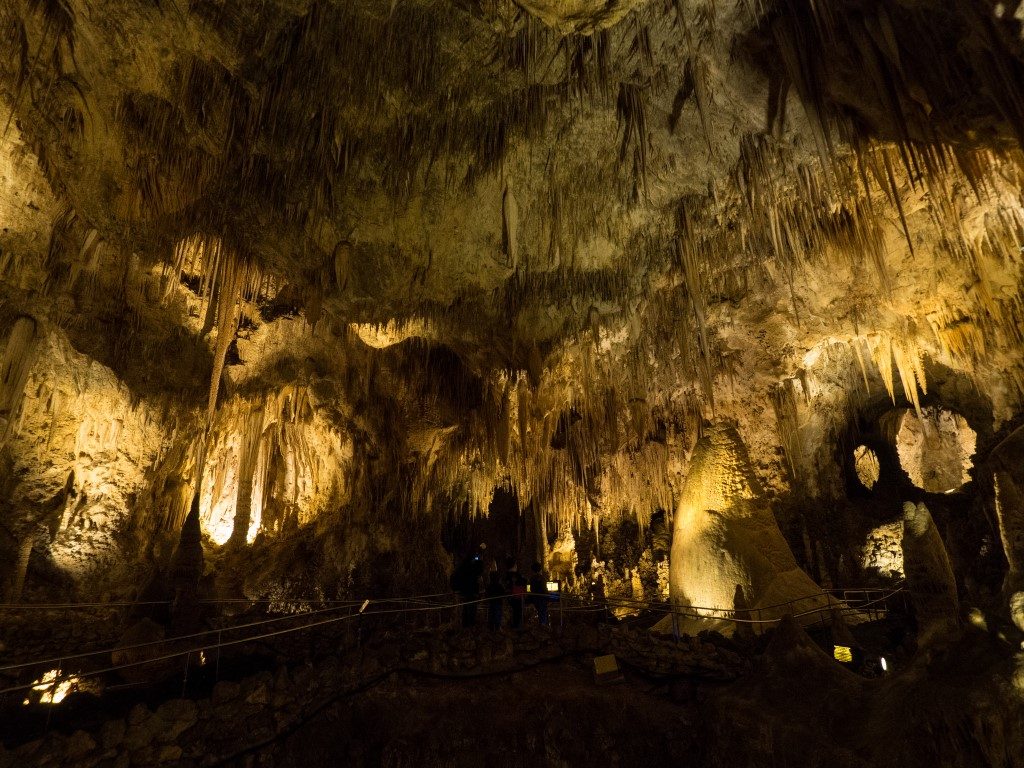 You’d actually do better to look up images of the caverns on the internet than settle for my amateur attempts to capture the scenes with my camera, but this image makes the point. Note the path winding through this portion of the Big Room. And, although this image doesn’t exactly capture the lighting, the National Park Service hired a theatrical lighting expert to do the lighting with the objective that the interior of the caverns would be illuminated, but the effect would still be “cave-like.” They succeeded on both counts. 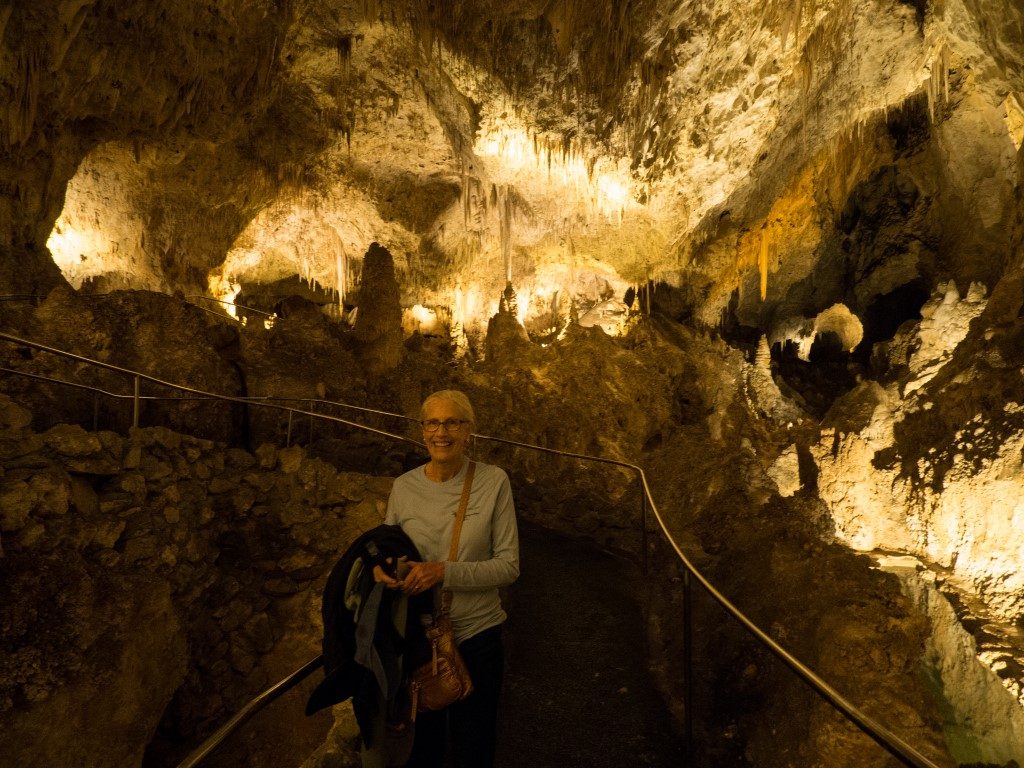 I forget how deep we are into the caverns at this point, but we were approaching the time when they closed up the caverns for the day, and we were deep enough that we decided to get one last picture of us alive in case things turned out otherwise.

The bottom line is that I could easily go back to the caverns again and spend more time just marveling in its complexity and beauty.

Second, I was right about seeing the bats, but first a brief digression.

[Social Commentary /on]  There is an amphitheater near the entrance to the cave where visitors can sit down at dusk and watch the flight of bats as they emerge. Everywhere one looks, there are signs explaining that all electronic devices must be turned off (not just put on silent or in sleep mode). No active cameras, cell phones, or other electronic devices are permitted because they interfere with the bats’ behavior and ability to navigate. So, for the good of the bats, and for the benefit of the experience, no exceptions. Everything must be off. The effect of those signs? Zippo. Nada. A huge percentage of the visitors, Wendy and I estimate about half, were completely loaded up with cameras (some even set up on tripods!), cell phones, selfie-sticks, and God-knows-what, all ready to blast away as soon as the bats emerged. What? What’s going on here? The only thing Wendy and I could figure out is that about half of the population, here at least, but probably everywhere, doesn’t care about nature, doesn’t care about their fellow man, and doesn’t particularly care even about the quality of their own experience. As long as they can take some inferior little snapshot, and take it home to their equally self-focused and despicable friends and family, they’re willing to ruin the very thing they came to see. How sad. Fortunately, though, an armed park ranger showed up just before dusk and said that his job was to protect the bats, that using electronic devices was a citable offense, and that if the devices weren’t turned off and put away at this point, those using them were subject to arrest. That did it. Apparently, the problem is widespread enough that the National Park Service has learned that, if moral force isn’t enough, the prospect of making little ones out of big ones in a federal pen will ensure compliance. [Social commentary /off]

And the bat experience? Apparently we were there too early in the season and most of the colony of Mexican Free-Tailed Bats won’t return from Mexico for another month or two. So, right now, there are “only” 20,000 to 30,000 bats in attendance! Precisely at dusk, though, as if on cue, hundreds of bats emerged and begin circling in front of the cavern entrance, racing around at incredible speeds, somehow managing not to collide, gaining altitude with each loop, until they reach a height sufficient to head off into the countryside, and away they flew. Then another flight emerged, again spiraling upward, faster and faster, higher and higher, and then heading off. And then another flight, and another, and another. It seemed like it would not end. I later asked the ranger if the bats were actually emerging in groups so they could form up into “squadrons,” so to speak, but that’s not what they’re doing. They are actually solitary hunters. But they have to spiral upwards because their little wings don’t generate much lift. In fact, most of them can’t even take off from the ground. They are, as he put it, “the jet fighters” of the bat world. After 45 minutes or so, now in almost total darkness, the bats were gone and we headed back to the campground. Had we been here in June or July, it would not have been a few tens of thousands of bats, it would have been hundreds of thousands. I can’t even imagine what that would look like.

So, add this to the list of reasons we’d return to Carlsbad Caverns for an even better re-do of the experience.