When I was planning the Big Bend stay, one of my assumptions was that one day we’d drive up to the McDonald Observatory near Fort Davis, see the telescopes, attend an evening “star party,” and then drive back. I made that assumption because, on my map of Texas, it’s only about a half-inch between Big Bend and Fort Davis. What a dipstick! It’s actually 150 miles twixt the two, 70 of which is through the park itself at 45 mph! Obviously, one doesn’t make a quick run to and from the observatory, so we cut the Big Bend stay short by one day and headed up to Fort Davis.

Doing an astronomy thing was on my list because lately I’ve become fascinated by the Milky Way and west Texas has the clearest and darkest skies in the United States, perfect for star-gazing. At the risk of sinking into a pit of interminable, mind-numbingly dull blather, a “galaxy” is a system of millions to billions of stars, along with cosmic dust and other stuff, all held together by gravitational forces. Current estimates are that there are about 100 billion galaxies, but that number may double as the Hubble telescope continues to scan the heavens. Our galaxy, the Milky Way, is a “spiral galaxy” that itself contains somewhere between 100 and 400 billion stars. (For those trying to picture this in their heads, a billion galaxies times a billion stars in each would be a “quintillion” stars, or 1,000,000,000,000,000,000 stars, of which our sun is one.) 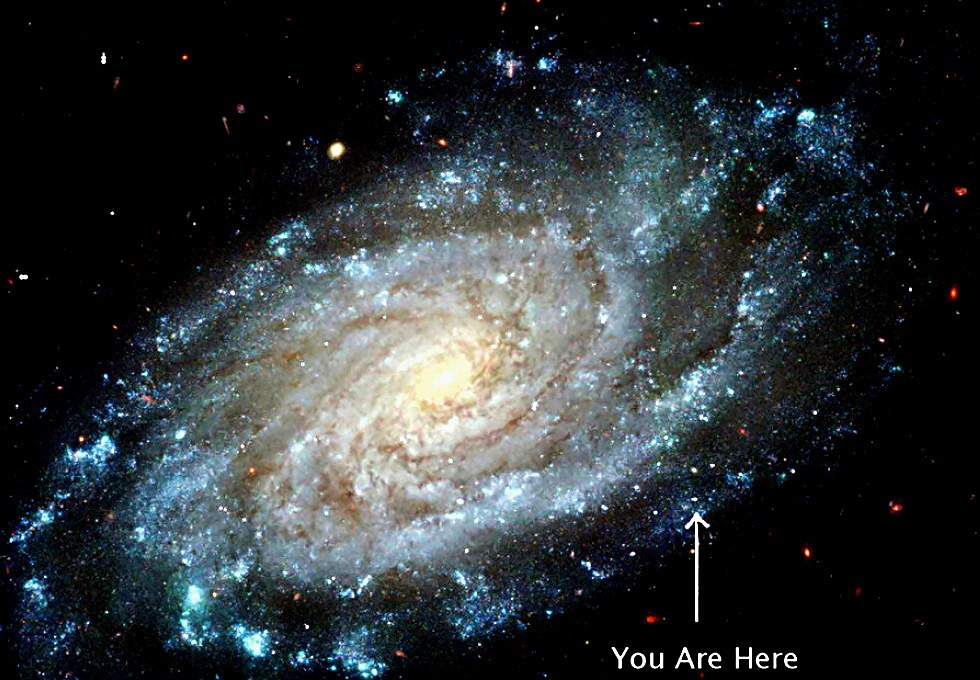 An artistic rendition of the Milky Way galaxy that I swiped off the internet somewhere. As is apparent, our sun is just one of countless stars in the galaxy and occurs, so they say, near one of the outer spiral arms.

What makes all of this fascinating is that on a clear night, one can see millions of our neighboring stars by looking “across” the galaxy! From earth, the “transect” across the galaxy looks like a milky band across the sky. In fact, during certain times of the year one can look right through the middle of our galaxy to the center “core”! In most urban areas, it’s too light and too polluted to see the Milky Way, but my heart was set on seeing it once we got to someplace better.

Fort Davis turned out to be a special treat in many way. First, the tour of the observatory was completely fascinating. We got to see their telescopes, watch real-time images of the sun boiling and blowing off huge spurts of flaming gases, and learn about all of those incomprehensibly bizarre aspects of the universe that astronomers and physicists deal with routinely every day. Just one example: McDonald Observatory is about to enter into a multi-national effort to study “dark energy,” a force that astronomers assume must exist because the universe is not only expanding (my brain is too small to understand what that even means), its rate of expansion is increasing because something, scientists don’t know what, is apparently pushing the galaxies apart. As they explain it, “we call it ‘dark energy,’ but we don’t actually know what it is, and it may not be ‘dark’ and it may not be ‘energy.’ Maybe our understanding of the universe is wrong, or maybe we don’t understand gravity. We’re not sure.” Excuse me? There are actually people to think about these things as part of their jobs? And besides that, this is a fine time to tell me that maybe gravity isn’t what we think it is.

Secondly, I was hoping to attend a “star party” at the observatory, using one of their telescopes to peer into the night sky. Unfortunately, though, the star parties are only offered on certain nights, and not the night we were there. Disappointed, I returned to the campground and, in one of those “coincidences” that proves there is a benevolent force ruling creation, an amateur astronomer had set up in the campground with a super-duper telescope (a 15.6″ reflector, for those who know what that means) and was hosting his own star party! He gave me a personal tour of the night sky, and I got to see Jupiter and its moons, the double-star of Castor (of Castor and Pollux, the two main stars in the Gemini constellation), an incredible close-up of the moon, and I forget what else. What a treat! 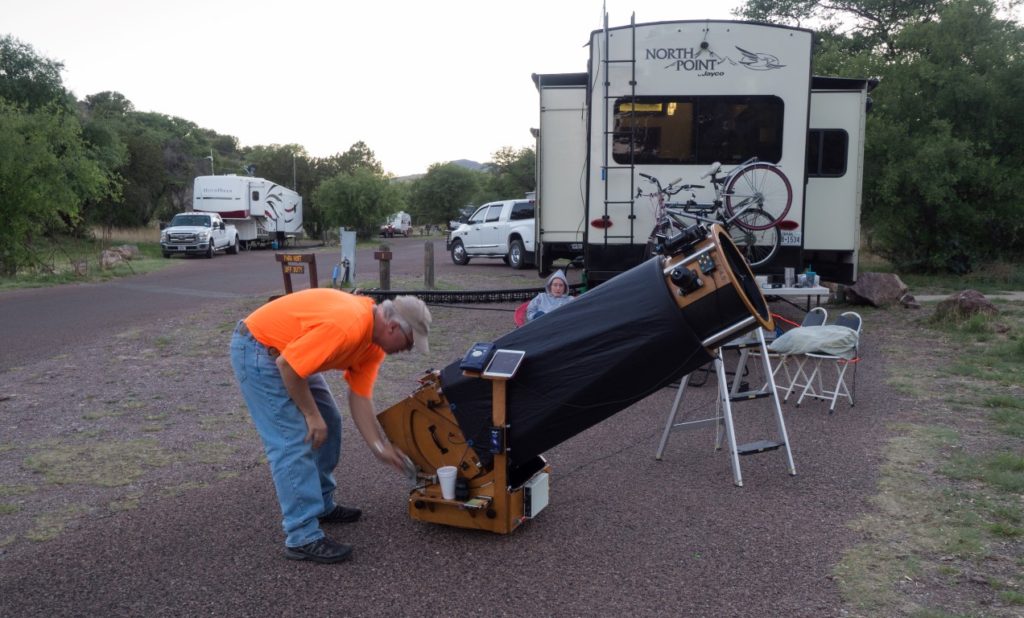 An amateur astronomer, who had shown up as part of an annual gathering of amateur astronomers, graciously set up his telescope and invited campers to come by and peer into the heavens! Here he is aligning on the north star to calibrate the telescope’s motor drives that allow him to enter any celestial body into his computer and the telescope automatically aligns on the object. I cannot even begin to think what a setup like that must cost, or how he manages to transport it in his RV (visible behind the telescope).

Finally, after a disappointing few days of overcast skies in Big Bend, the night turned crystal clear, I got up at 4:00 a.m., and there was the Milky Way in stunning glory. My little baby camera isn’t very good for astrophotography, but I was able to capture this shot. 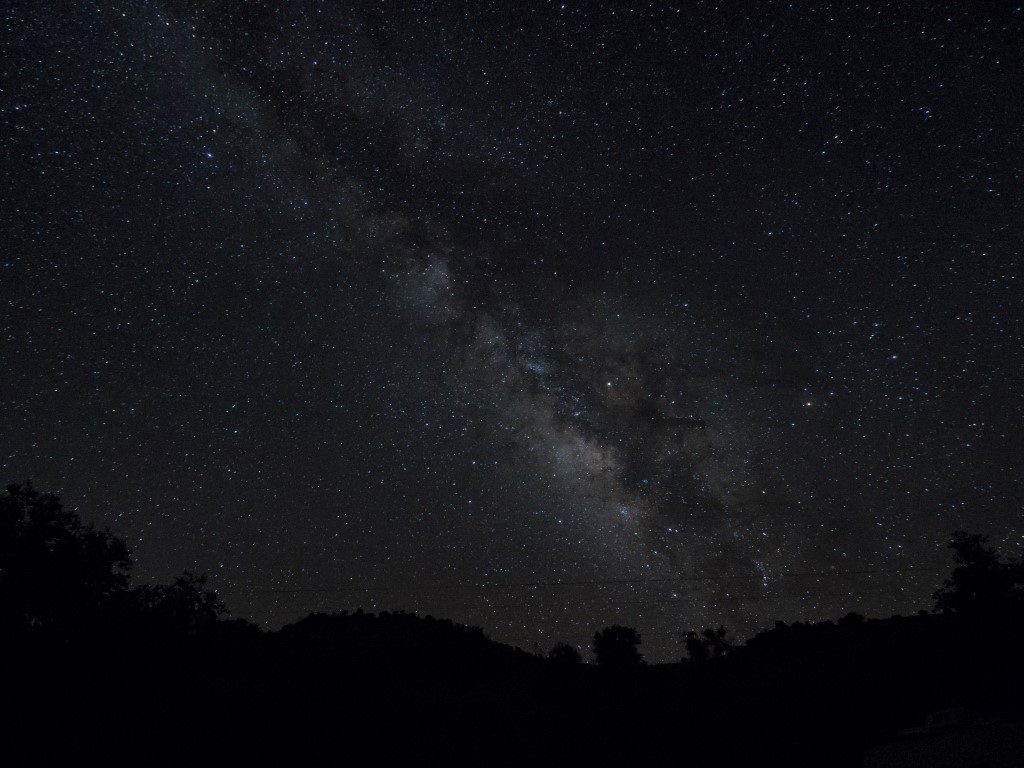 The Milky Way, as visible from behind our RV. If you look closely at the lower right-hand corner, you can see a C-shaped gap in the cloud of stars. That’s the galactic center, meaning we’re looking from our vantage point at the edge of the galaxy, right through the middle and out the other side. Ponder that for a moment.

(It’s hard for a computer-appropriate image to capture enough detail to reveal how truly impressive the Milky Way really is. A larger file, available here, is better.)