After arriving in Alamogordo and setting up at the campground, we went out and looked at sand. Lots of sand. Some of it was in piles. That’s it. Good bye.

Actually, contrary to what one might think, going to White Sands National Monument is not just about going to look at big piles of sand. First of all, it’s not “sand” as most people would think of it. Such sand is ground up rocks (mostly quartz). The White Sands stuff is granules of gypsum, like in wall board and plaster of paris and toothpaste, that started as big gypsum crystals created when gypsum washed out from the surrounding mountains and just recently (over the past 7000 to 10,000 years, which is a blink of an eye in geological time) got eroded into small particles by the action of the constant desert winds. So, there are heaps and heaps, over miles and miles, of gypsum granules forming an unbelievably picturesque landscape. In fact, there are 275 square miles of these dunes, the largest in the world. But the geological story doesn’t end there. Gypsum is (1) water soluble and (2) easily blown away, so on both counts it shouldn’t even be here. But, since I saw it, I’m pretty sure it is. How can that be? I don’t fully understand the geology (even after attending a ranger talk on the topic), but it turns out that there’s a perched aquifer just under the surface of the dunes that binds up the base of the gypsum fields so that, while the top few feet of the dunes get blown hither and yon by the wind, the mass of the gypsum remains fixed within the confines of this subterranean water, and then with each rain, gets formed into big crystals, eroded into sand, and the process repeats. 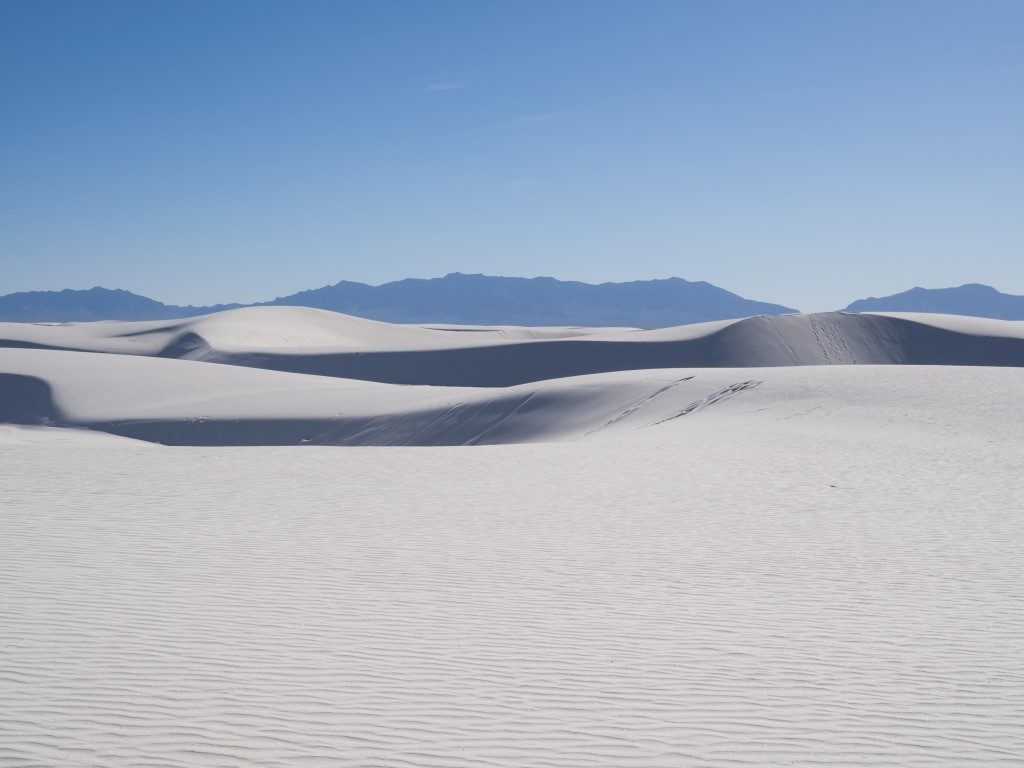 Miles and miles of stunningly white gypsum (sand), created in an improbable geological process starting with gypsum being washed out of the San Andreas mountains in the background

The other thing that makes White Sands NM unique is that unlike most venues under the jurisdiction of the National Park Service, where a “look but don’t touch” rule is enforced, at White Sands the NPS wants everyone to go out and play in the dunes! Really. Not just hiking and picnicking and nature trails and ranger talks and all the usual stuff, all of which abound and are very well done, people are encouraged to drive along an unpaved road of hardened gypsum, climb the dunes, and walk out into the area and take in the breathtaking beauty of the white expanse of rolling dunes. NPS even sells flying saucer sleds in the visitor center! It’s almost as if NPS were saying, “Look, anything you do is going to get obliterated by the wind in a day or two anyway, so go out and have a blast!” And people do. We went on a short hike into the dunes, and part of the fun was trying to scramble up the dunes with your feet slipping backwards almost as fast as you can move forwards. It’s like playing in the snow, but in a way that’s warm and dry. If you used to be a kid, coming to White Sands is a ton of fun. 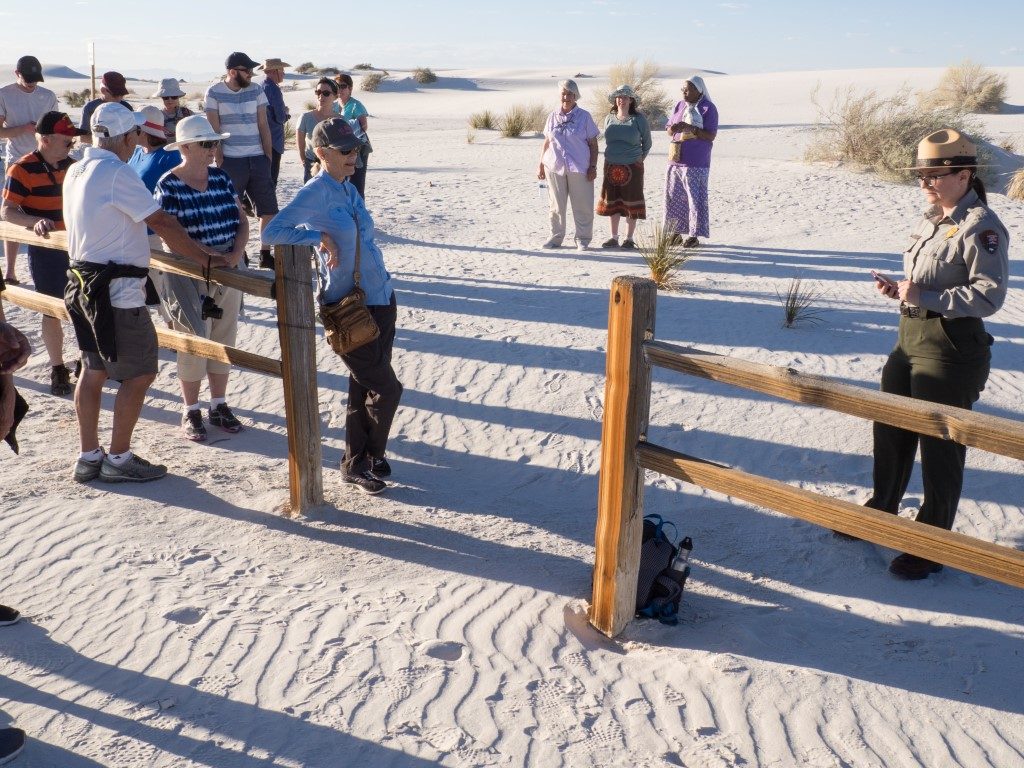 Getting ready for an early evening ranger-guided stroll into the dunes. Of course, because this is an NPS function, the experience was perfect and our guide was knowledgeable, engaging, and funny. We’ve noted it before, but the ranger cadre of NPS is definitely one of its greatest assets. 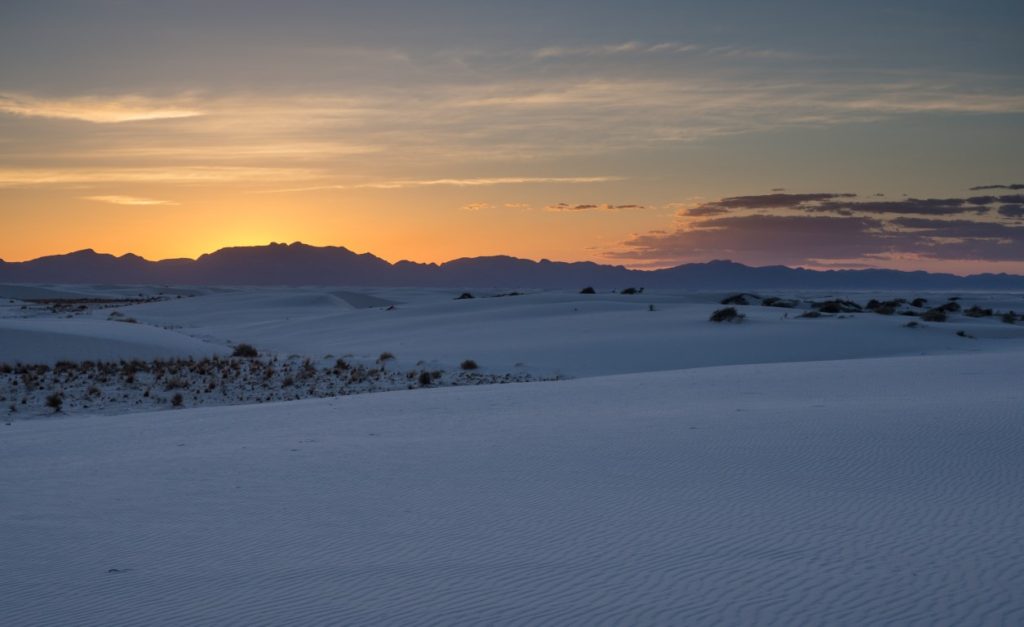 The ranger-guided walk ended at sunset and we were treated to one of those flaming orange desert sunsets. The sliver of plant-laden dune in the center-left of the picture is the “inter-dune area,” where the aquifer lies just about 20 inches or so beneath the surface and holds the whole dune field together.

White Sands is one of the stops made by the family back in 1988, one that they always raved about. I never understood why until now. What a great place.