We’ve found ourselves in a somewhat different circumstance: we left Port Angeles a day early, and then decided to shave a day off the Ketchum stop, so we had an unexpected opportunity to move west at a very leisurely pace, like only 150 to 200 miles per day. So, we ambled along (even more amblish than our usual snail’s pace) from Port Angeles, to Cascade Locks OR, Pendleton OR, Caldwell ID, Ketchum ID, and Idaho Falls ID, creeping along towards the real destination at this point, Grand Tetons National Park. Coincidentally, we sort-of traced the Oregon Trail, except in reverse, like if maybe the early settlers decided Oregon was destined to be too weird, gave the whole territory back to the Indians, and returned home for the good of future generations.

And what we decided is that this pace is too slow. There’s really no reason to get off the road at lunchtime just to go to a campground so we can, well, go to the campground. If we had it to do over, although leaving Port Angeles and getting out of the infernal rain was a good idea, we’d do a different moseying-along route that would give us more to do at each stop.

With two exceptions. Our stop in Ketchum did allow us not only to see the beautiful Sawtooth Mountains area of Idaho, but also to see a long-lost friend whom he hadn’t seen in, eee-gads, probably 30 years! 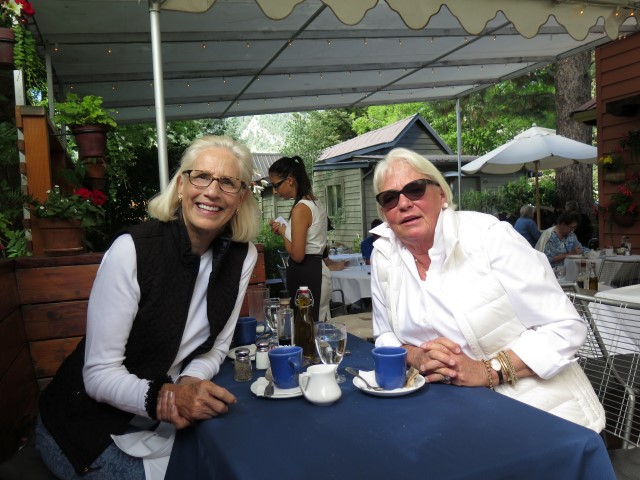 Breakfast at Cristina’s Restaurant with our friend, Carol Thielen, who lives full-time in Ketchum.

And Ketchum is, of course, story-book beautiful. 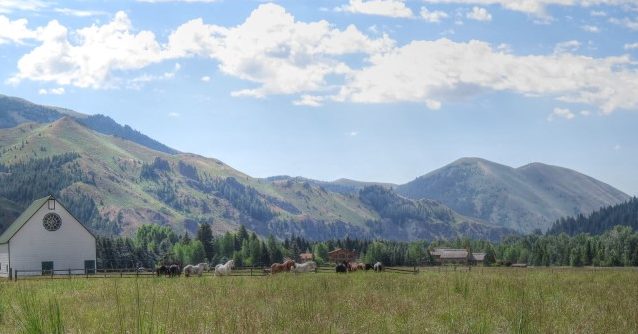 Second, our route took us through Craters of the Moon National Monument. Miles and miles of lava flows, cinder cones, lava blog-thingies, and just weird stuff, all the weirder because it’s plopped down in the middle of the Idaho high desert at odds with everything that surrounds it for miles in every direction. 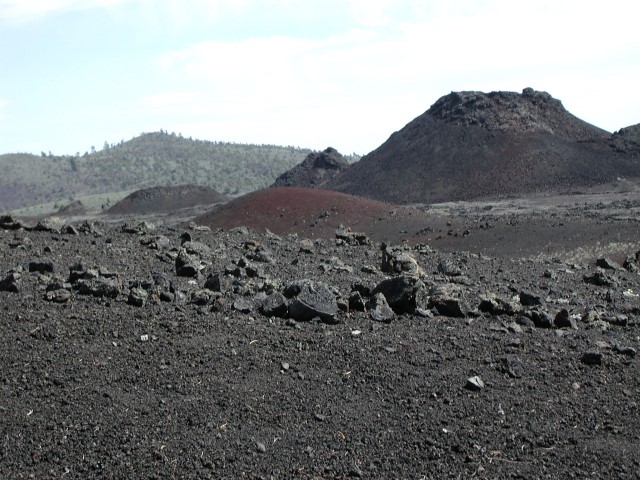 Why put all this in the middle of Idaho? Seems like it would be more appropriate in Hawaii. Or Mars. Still, very, very interesting.

And speaking of weird stuff, the route also took us past miles and miles of the Idaho National Laboratories, also plopped down in the middle of the Idaho high desert, but this time it’s perfectly apparent why it’s there. The signs along the barbed wire fence line only say “RESTRICTED AREA,” but I’m pretty sure this is where the government conducts it’s top-secret operations, such as those that resulted in the fake moon landing, training for the CIA operatives who assassinated JFK, and planning for the eventually military takeover of the United States. Really. Look it up.

One more thing about striking vistas. One of the most dramatic landscapes in this country has got to be the Columbia River gorge. Sheer rock faces, with flat buttes above, framing a mighty river–the sight is truly unforgettable. Or maybe I should say, one of the formerly most dramatic landscapes. The buttes and canyons that border the river are now largely populated with wind turbines. Hundreds of huge, 2- to 3-megawatt turbines, one after another, for large portions of the gorge. We’ve seen the same thing over and over wherever there are dramatic buttes and ridges.

Which got me thinking. In the earliest days of the industrial revolution, there were whole cities covered in steel mills, textile mills, power plants, and such things, all with huge smokestacks covering the area with black smoke and casting a gray pall over everything. By today’s standards, it looks hideous. But I’m sure back then those who saw it didn’t consider it ugly; it was a sign of progress, affluence, and development. It was, in its own way, beautiful.

So, is the same true now for wind turbines? By modern standards, those white towers with slowly rotating blades look like progress and responsible social development, beautiful in their own way, even though by some objective, more aesthetic, standard, one might view it all as despoiling the landscape. (Imagine the horror, for example, if someone proposed to install wind turbines along the ridges of the Grand Tetons.) Maybe someday, someone will start tearing down wind turbines in order to “restore” the natural beauty of the Columbia Gorge?

Oh well … this is the kind of post that just pops out when our travels don’t otherwise provide much material. Future posts will be back to reality (mostly): next stop is the Grand Tetons!