What can one say about this place that hasn’t been said better a thousand times before? Even pictures are bound to be boring and dull because Ansel Adams already outdid anything anyone else could ever do. So that’s the end of this post. Goodbye.

Never mind. I can’t stop myself. In fact, with six days in the park, this post is going to be a longie.

Our route from Idaho Falls took us through a series of National Forests (Caribou, Bridger, and Teton), and then along the Snake River into the national park. It says something about what one can expect from the destination when the route to the scenic area is itself a scenic area, almost as if nature were saying, “Just so you don’t sprain something when you get to the Grand Tetons, here’s a little something to warm up on.” 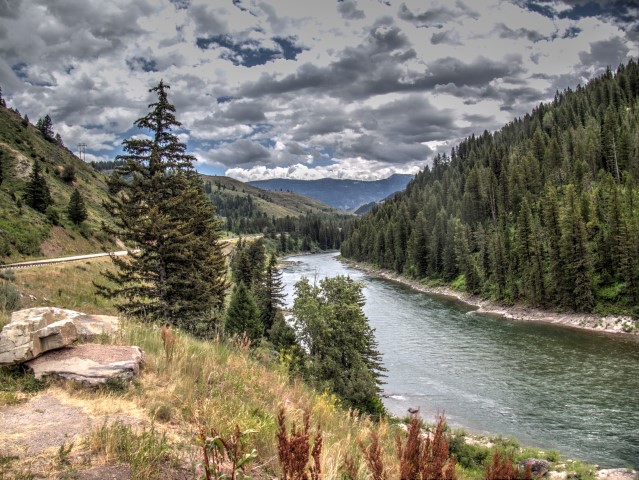 One of the many pullouts for slow traffic (that would be me) along the Snake River as we head north. This is nothing, just the drive to the place where things start getting scenic.

We checked in, got the relevant information, and mapped out what to do over the next few days, only to confirm that, once again, we had too much to do and not enough time to do it. Then, as luck would have it, our insufficient stay was made worse by the fact that the weather on Monday, instead of clearing up as forecast, stayed wet and windy.  So we were forced to spend that day mostly touring around in the car. Still, though, perhaps as more of nature’s gradual immersion process, even on a dismal day the drama of the Grand Tetons is apparent. 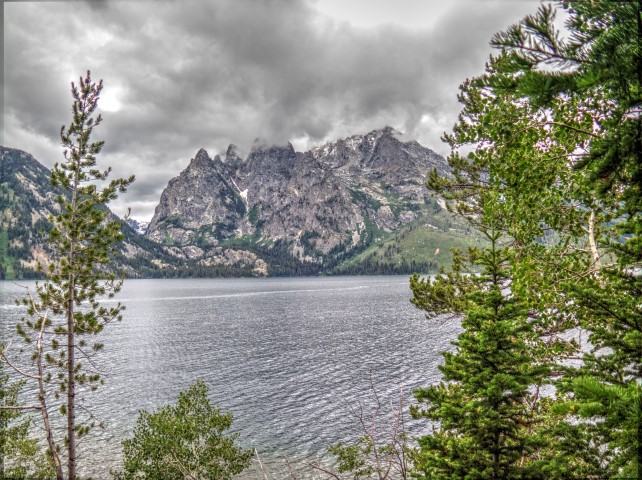 This “Cathedral Group” of the Grand Tetons from across Jenny Lake.

And then, nature, apparently believing that we were sufficiently accommodated to bear the sight of the mountains, cleared out the weather and gave us the full monty view of the Grand Tetons. 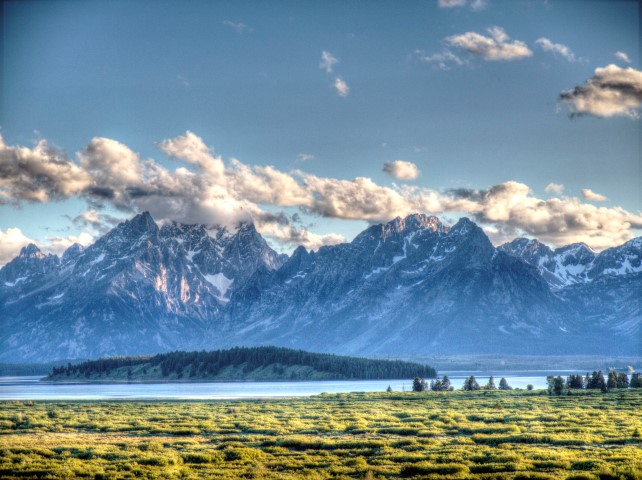 How could such an improbable thing come to be? We attended a ranger talk on the geology of the Grand Tetons, which was fascinating. There is a fault line that runs right along the base of the mountains. In a surprisingly small number of really big movements along that fault line, the mountain side got pushed up and the valley side hinged downwards, leaving an abrupt edge that rises essentially straight up 8000 feet from the valley floor. And the process is still going on. Earthquakes occur here every couple thousand years, with the last one about 2400 years ago. When the next one happens, the geologists think it’ll be big, like really big: probably 7.5 on the Richter Scale and the effect will be that the mountains will be about 20 feet higher. (Actually, the valley floor will be 15 feet lower and the mountains will be 5 feet higher, but why quibble.)

Tuesday, we finally got to get out and do some hiking, doing a five-mile hike up and around Taggart and Bradley Lakes. 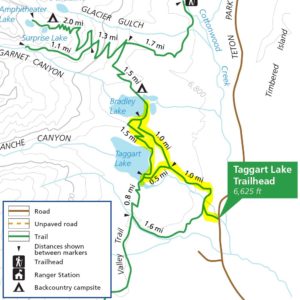 I hate to keep spewing out boring pictures of one stunning view after another, but it’s unavoidable. Every turn presents another breathtaking view. Wendy even noted that we were developing a monotonous refrain: every time we can around a turn on the trail, it was the same thing. “Seriously?” 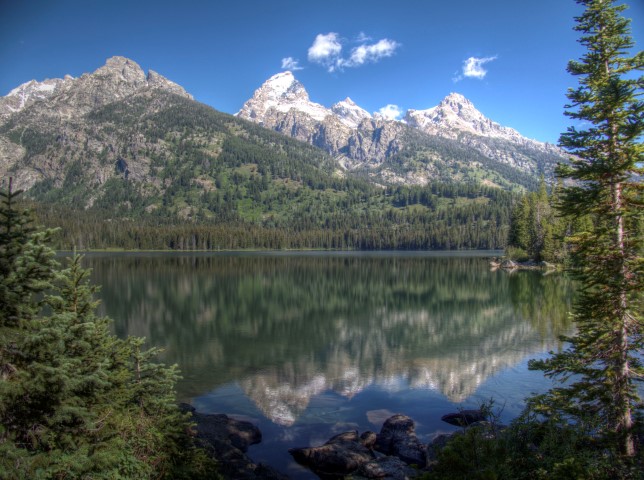 Taggart Lake, one of about a gazillion glacial lakes in the Tetons, all of which are this scenic or better. Yet the effect never diminishes.

As if the day hadn’t been perfect enough, we then went to Jenny Lake Lodge for dinner. We definitely are not fancy dancy people. We travel around in our little motorhome, eating our little home-cooked meals from a little list of favorite dishes, and when we go out, it’s to a little family-style nearby eatery. But this restaurant, if we could afford to eat this way (which we can’t), would change us forever. Dinner is a five-course meal, prix fixe (at $90 each, not including drinks and tips), and each round is a masterpiece, not only in its preparation, but in its presentation. As just one example, the plate for each course is nicely adorned with a flower, and the flower is itself edible. Adding to the experience, the son of one of our dearest friends is the dining room manager who gave us the behind-the-scenes details of what it takes to run a five-star facility like this. Oh, and the view is typical: 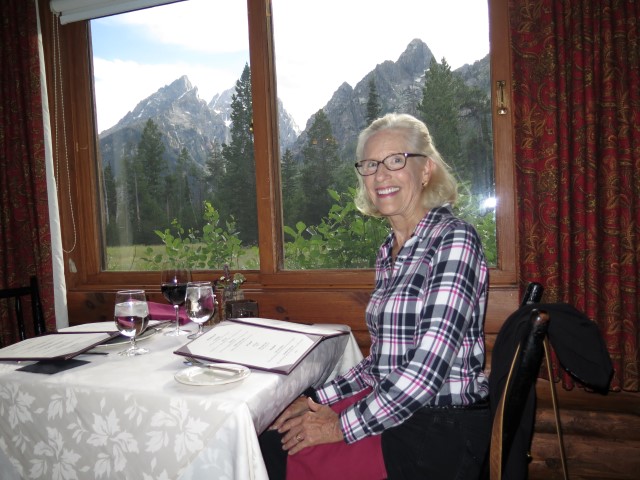 Wednesday was a fishing day, although it turned out to be more of a scramble-around-and-be-stupid day, an activity for which we appear to be eminently suited. The story is too long and too convoluted to recount, but it began with a 6000-calorie breakfast buffet at the Jackson Lake Lodge and ends with a perfect fishing spot on Jenny Lake recommended by Cliff and, brace yourself, yet another stunning view. 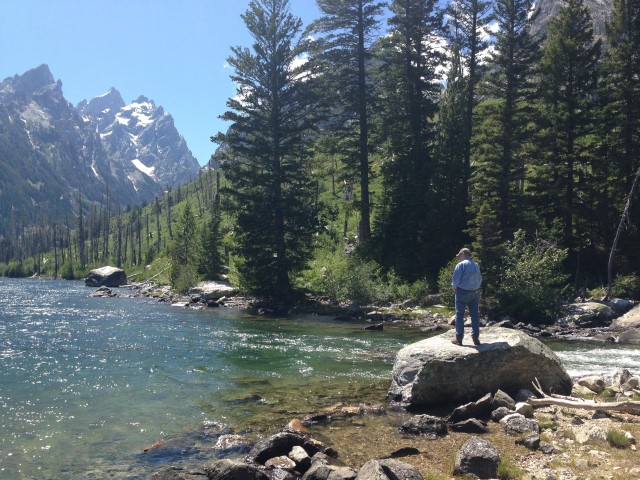 Thursday and Friday were more taken up with more hikes through more stunning views. I know that sounds like a lot of hiking for two old wussie geezers (i.e., “wheezers”), but we seem to be doing surprisingly well. Grand Tetons has over 200 miles of trails, and those that are less than 8 to 10 miles long or so, rated as “moderate” or less with only limited sections of “strenuous,” are all just fine for us (and there are dozens of such trails) . It would take us weeks to exhaust the possibilities. So Thursday we did the other end of Jenny Lake and up (and up and up and up) to Inspiration Point. That hike, as it turned out, was one of more crowded we’ve experienced so far, which is not to be wondered at: every fifteen minutes the ferry boat unloads another group of 35 tourists who make the trek (or at least try to make the trek) 400 feet up to the prominence (which is roughly equivalent of taking the stairs to the top of a 38-story office building). 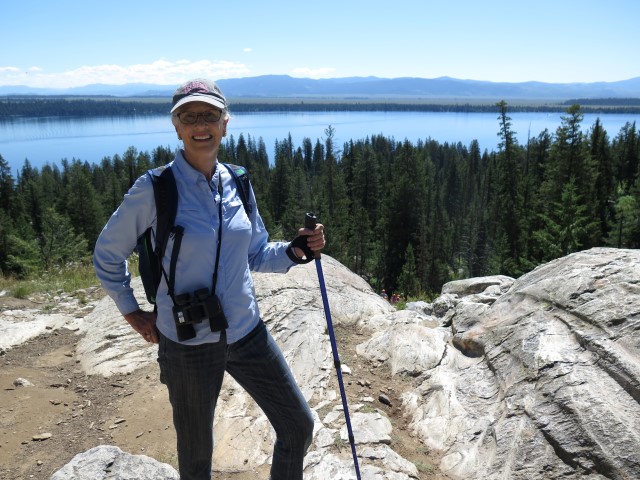 On the way up to Inspiration Point, overlooking Jenny Lake.

On Friday, it was a ranger-guided hike at the Laurance S. Rockefeller Nature Preserve. There’s too much to say about the experience, especially since we had never visited this end of the park before, but two points are significant. First, Grand Tetons National Park would be something altogether different were it not for the Rockefellers. Just one example: When John D. Rockfeller had agreed that the Grand Tetons area was a risk of intrusion from commercial interests in the Jackson Hole valley, he asked what he could do to help. Horace Albright put together what he viewed as the most aggressive request he could imagine, which would have involved Rockefeller buying up land worth a few million dollars. Although he was embarrassed to be asking for so much from a man who had already done so much, he presented the plan to Rockefeller anyway. Rockefeller responded, “Mr. Albright, you misunderstood what I was asking you for. I want to know how much it would cost to buy the entire valley.” That family legacy continued, with Laurance donating the family property, several thousand acres, which is now the nature preserve section of the park.

The second point is this. Among the resources possessed by the National Park Service, we have come to conclude that the most valuable is the ranger cadre itself. Every ranger we met was knowledgeable, friendly, accessible, and dedicated (and probably underpaid). We attended four separate ranger programs at Grand Tetons, and all of them, every single one, was outstanding. And none was better than the ranger-guided hike at the Rockefeller Nature Preserve. Our ranger, Lisa Simmons, was not only unbelievably knowledgeable about the flora and fauna of the area, she had a style of engagement that made the experience doubly memorable. One example: she would from time to time stop and pose questions as a way of engaging us in a discussion, including ones that were often pleasantly philosophical, such as, “Tell me what the experience of the Grand Tetons does for you? What does it mean?” Everyone responded with statements about the beauty of creation, the sense of man’s place in nature, the importance of preserving such areas, and so on, until the discussion got to a couple visiting from Germany, who said, “This place helps me to understand a lot about America. In Germany, we have parks, but they are small. Here, everything is so big, and besides that such big places help us to understand the size and power of nature itself, seeing places like this helps us understand why you Americans have always been so good at thinking big ideas, why you always see limitless possibilities…” Excuse me? This is a chit-chat on a nature hike? And it happened several times as we ambled along, all facilitated and encouraged by a ranger who knew her stuff at many different levels. 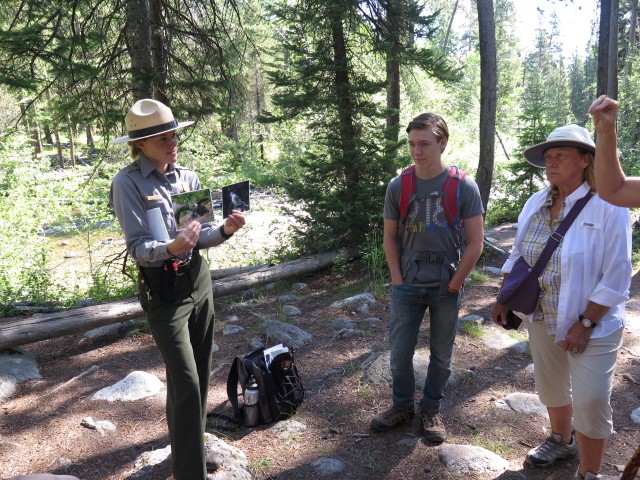 Our ranger, Lisa Simmons, leading a discussion on symbiosis in nature. Here, she asked us to guess how the moose and grey jay exist in a symbiotic relationship. This was just one of about a dozen stops where she used a discussion method instead of the conventional “sage on a stage” manner of conveying her incredible knowledge.

Once I get back to Atlanta and can organize the photographs, the Grand Tetons photo album will be located here.

Today we’re off the Yellowstone.

P.S. For those nervously awaiting an update on the fate of our little wiener dogs, they’re still alive.