OK, so this is apropos of not much, but here are a few interesting facts. ExxonMobil recently announced its 2013 earnings, reaching $32 billion on sales of $438 billion, or 7.4%. Admittedly, a 7.4% rate of return is pretty good (although not stunning–it’s a little better than I do on my 401(k)). So, is that why gasoline is so expensive? Because ExxonMobil (among others) is making a lot of money every time I buy a gallon of gas? As it turns out, no.

The same post points out that ExxonMobil’s profits work out to about 5.5 cents for every gallon of gasoline it produces, transports, and sells. That’s a lot of work to earn 5.5 cents. So we could whack ExxonMobil’s profits entirely and save 5.5 cents on a gallon. Whoopdeedoo. But someone is making money on that gallon. I wonder who it could be. This map explains it. 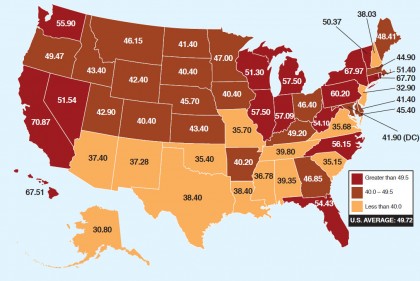 So … every time I buy a gallon of gas, ExxonMobil makes 5.5 cents, the federal government makes 18.4 cents, and the State of Georgia makes over 28 cents. That makes the burden here in Georgia almost 49 cents/gallon. Maybe I’m lucky, though. It’s over 70 cents/gallon in California. Think about that when you’re pumping 80 gallons of gas into a motorhome that gets 7.5 mpg.

I guess that means you can add me to the list of people who are hopping mad about gouging at the pump!