We’ve always loved southwest Colorado, but the family’s first exposure to the area came sans moi back in 1988 when Wendy, her dad, and the three kids made a 6-week trip, zig-zagging cross-country to Grand Tetons where I met up with them. I’m catching up with their experience only now, nearly thirty years later, checking off Fort Davis, Carlsbad Caverns, and White Sands. And now it’s southwest Colorado.

Their base of operations for the area was a reservoir 18 miles from Durango, Vallecito Lake. At 7800 feet, it’s the highest such lake in Colorado, and is situated in an unbelievably picturesque valley. Our mission: find the camp site where the family stayed 29 years ago. Success: 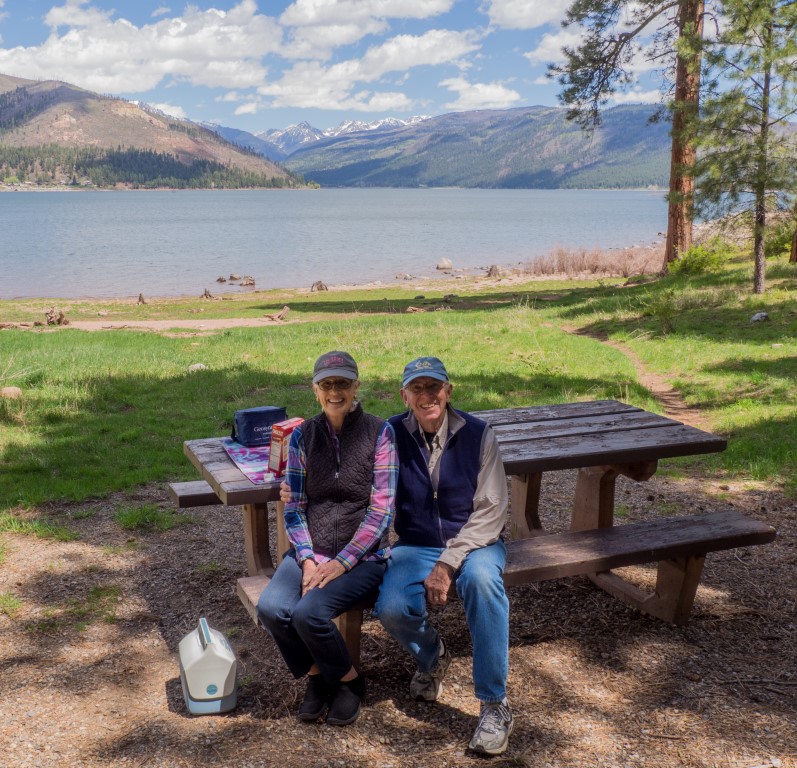 The very spot where the family camped back in 1988. Unfortunately, a fire hit the area in 2002 and it hasn’t recovered yet. And the former campground is now day-use only. But it provided a perfect place for a picnic, for Wendy to relive a trip of a lifetime, and for me to share vicariously in the camping experience of our little tykes.

There are many stories attending the stay at Lake Vallecito (Jennifer coming down with something, the boys converting a log in the freezing cold water into a makeshift raft, Cliff celebrating his 10th birthday, Robert getting his finger stuck in a Coke can) (although consensus seems to be emerging that the finger-in-a-can event actually happened at Fort Davis), but the story that gets the most play involves Cliff standing motionless in the field, like the human equivalent of a Great Blue Heron, with his arm cocked and spring loaded, until bam! he snatched a field mouse out of the grass. Funny how in a beautiful place like this, every time one mentions Lake Vallecito, someone immediately chimes in with, “Isn’t that where Cliff caught the field mouse?”

The next day, it was off to drive the San Juan Skyway, a 236-mile designated scenic drive that forms a loop around the San Juan mountains in southwestern Colorado. That range is the largest mountain range in Colorado and has 19 peaks above 13,000 feet. Even in mid-May, the upper portions of the drive were covered in snow. 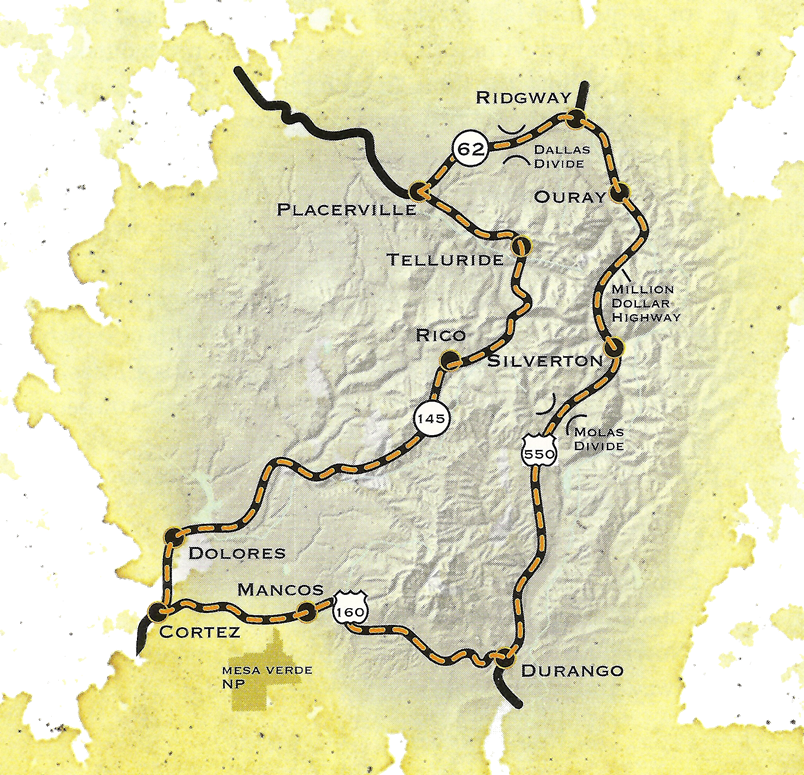 The key features of the San Juan Skyway. Durango, Silverton, Ouray, and Telluride are all now world-famous tourist destinations. We started at the lower left corner at our campground at Mesa Verde National Park.

We made at a quick stop at Molas Pass (10,910 feet high), about half-way between Durango and Silverton.

On the north side of the skyway, just past Ridgway, the road passes through gorgeous ranch country, although the peaks of the San Juan mountains are never out of view.

But the highlight/lowlight of the route, without a doubt, is the famous/infamous “million dollar highway,” a terrifying stretch of “road” between Silverton and Ouray, famous not only because it is narrow (barely wide enough for two cars) and twisty, but because it has no shoulders and no guardrails, and has a rock face crowding one side and a thousand-foot sheer cliff along the other. If that description doesn’t scare the bejeezus out of you, perhaps you should consider that the road figures prominently on the list of the world’s most dangerous roads: Dangerous Roads. 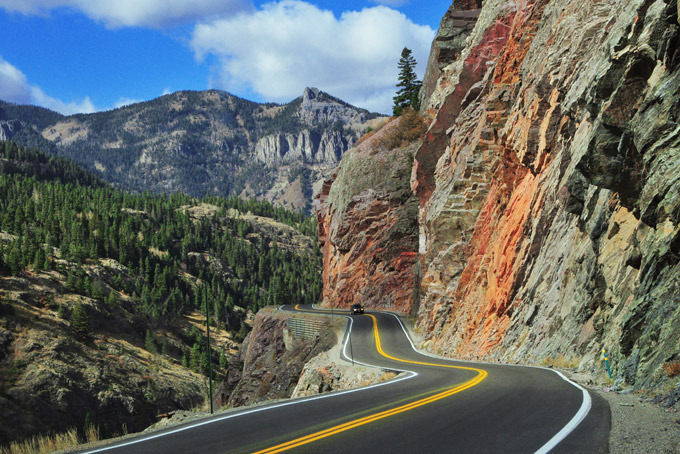 This is not fake. It’s insane. There are places where the speed limit is 10 mph and no one “speeds” through those sections. Most of the passengers have to close their eyes rather than look over the edge. Even a new car’s “lane departure warning” wouldn’t help much, except that it would give you something to listen to as you plunged to a certain death.

Hard to believe, but it was a great day. After seven hours on the road, though, we were ready for a rest.

One other thing we did in the Four Corners area: We asked the clerk at the campground what was a fun thing to do locally and she suggested Hawkins Preserve. This seems to be a recurrent theme in our travels: small, locally funded nature preserves that are well done, completely enjoyable, and turn out to be surprising highlights of the trip. This preserve had a network of trails, maybe 4 or 5 miles total, with a wonderful picnic area in the middle. 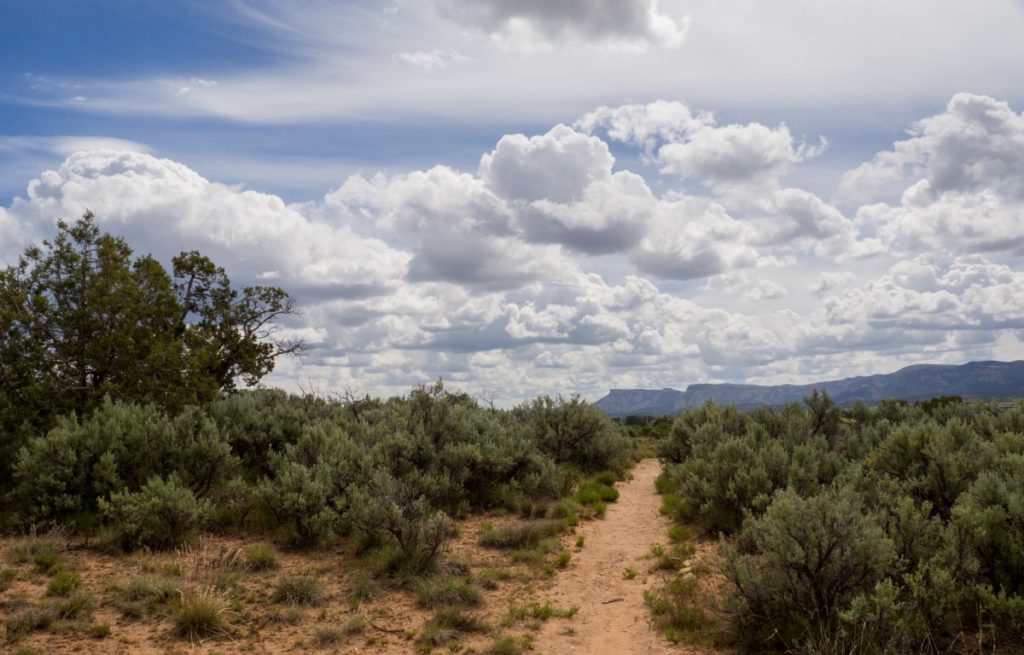 The preserve actually had four separate environments, ranging from Juniper-Pinyon Pine forests to deep riverbed canyons. And it was a beautiful day.

It’s reassuring to know that many communities provide great places to relax and rejuvenate (aided by a picnic lunch), even though such places never show up on the radar of most travel plans.