Wendy and I have both been to this national park several times, and it’s not one of our favorites. I’m not sure I know why Mesa Verde even is a national park, as opposed to, for example, a National Historic Site.

To be sure, it is interesting in its own right. Thousands of people once lived in over 600 cliff dwellings, most of them hidden under the overhangs of the canyons cut into the mesa. No one even knew this whole series of habitations was even here until it was discovered by some (probably drunk) cowboys in the 1800s! Everyone ought to see this place, or similar cliff dwellings, once. But once is enough. 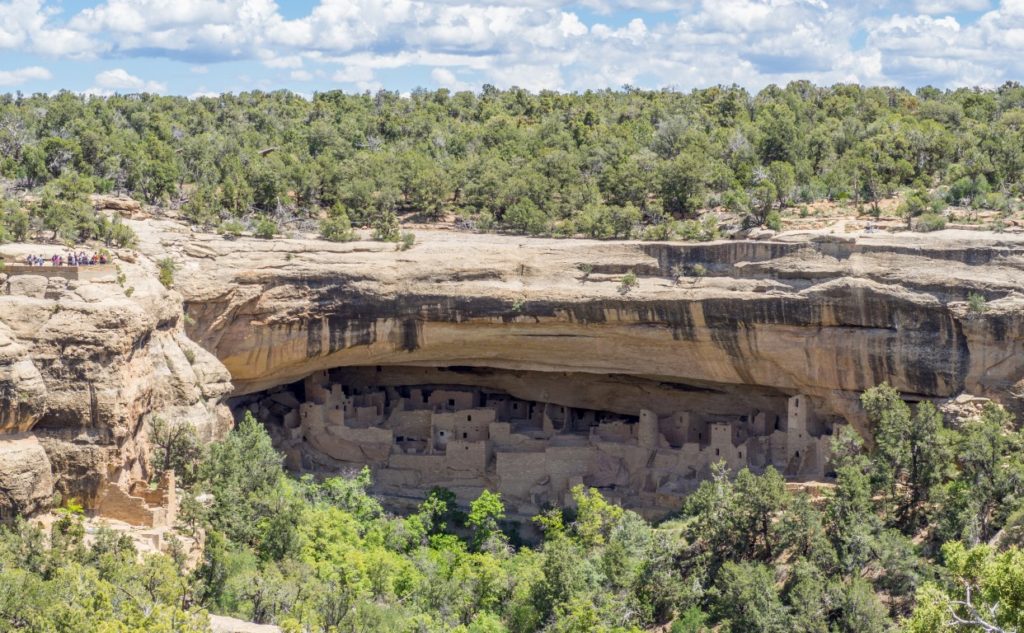 This area was occupied from AD 700-1300 by “Ancient Pueblo peoples” (They used to be called “Anasazi Indians”–I assume there’s some political significance to the change), although they lived on top of the mesas for most of that period, living in the cliff dwellings for only the last 75-100 years.

And there are some interesting footnotes to the story. For example, these dwellings were abandoned around 1300, apparently because the Anasazi completely depleted the resources of the area (so much for the Noble Indian living in perfect, sustainable harmony with nature), perhaps in part because of a 24-year severe drought (so much for “climate change” being a new thing caused by nasty coal-burning power plants). But it’s basically just an area of ruins and decayed buildings of a culture that suffered an economic collapse and couldn’t adjust, sort of like making modern-day Detroit a national park.

And (good news for the family reputation), I did avoid getting in an argument with the ranger. When he commented that the Hopi Indians are having a hard time getting the young people to stay on the reservation, making baskets and doing chants to the spirits in the dirt pile, instead of moving to California, going to Stanford, getting a degree in computer science, working for Google, advancing human knowledge, and providing a good life for themselves and their families, how sad, I resisted the urge to offer the counterargument and instead smiled politely and concluded in my mind the ranger must be a total dipstick.

So, we canceled the trip to Blanding (which would have offered more of the same, plus side trips to see ancient Indian petroglyphs, which look a lot like a child’s stick figures, except not quite good enough to be taped to the refrigerator) and will explore southwest Colorado instead. Further posts to follow.