Forty-four years. Forty-four years ago, when Wendy and I were traveling around the country, without an agenda, with nothing to do but to enjoy each other and this country, staying in national and state parks as we traveled eastward, we promised each other, “We’ll do this again someday.” And here we are. It looks like this will be the year when we see national parks spanning the country from the Everglades to Glacier. And not only are we embarking at long last on fulfilling a decades-old promise, we are doing so in the centennial year of the National Parks system.

Everglades National Park is a fitting beginning, different from anything we’ve ever done before. While most national parks were established to preserve some dramatic panorama for future generations of visitors (imagine Teddy Roosevelt seeing Yellowstone for the first time), Everglades was established solely to protect an ecosystem. Over 1.5 million acres of what is essentially a slow-moving river (only 1/4-mile per day), a “river of grass,” as is said, 60 miles wide and only a few inches deep, flowing from Lake Okeechobee southward towards Florida Bay. 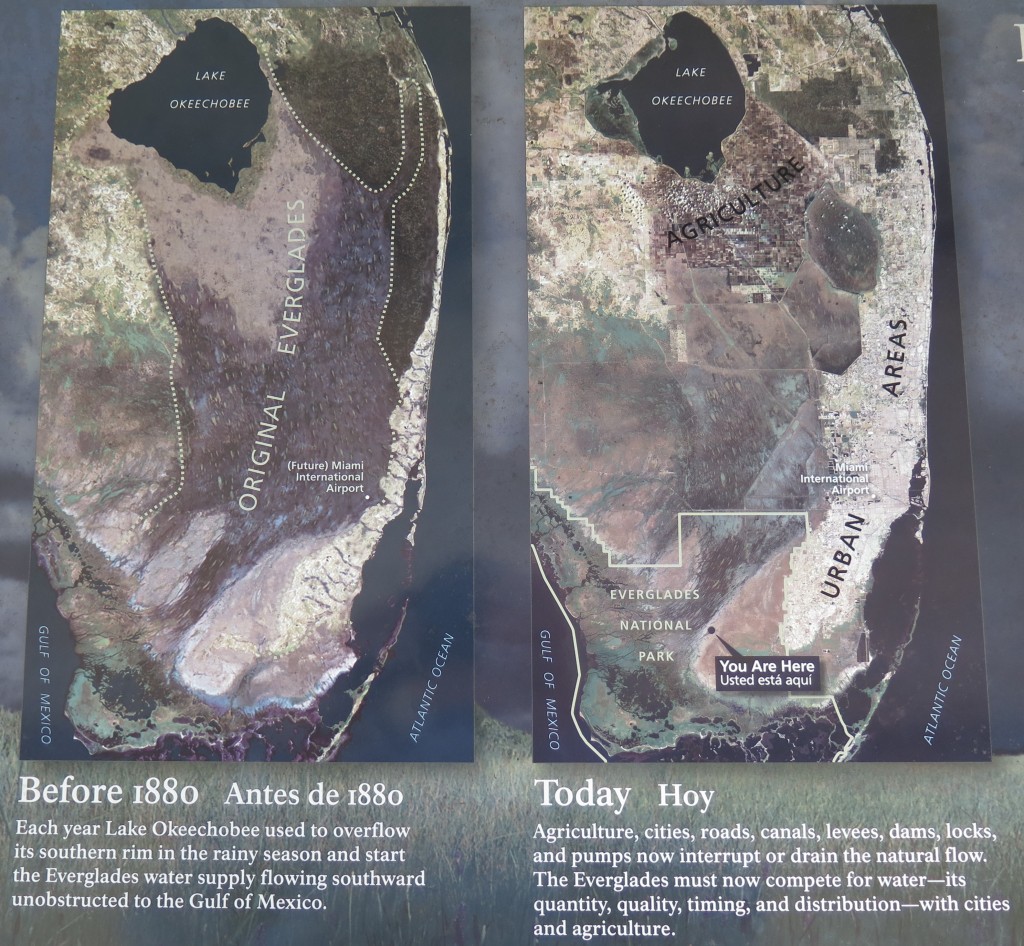 After a quick stop at the visitor center at the entrance, we drove the 38 miles to the Flamingo campground, visitor center, and marina. 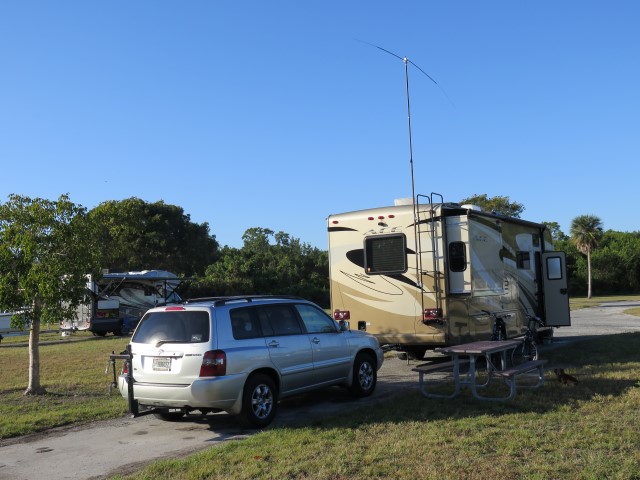 Set up at Flamingo Campground. (And yes, I did set up my ham radio station, although I only had time to operate for a few minutes.)

And once here, we wasted no time in doing what we like best about such places: visiting the educational displays, attending the ranger talks, and generally exploring what makes each national park worthy of its stature.

But here, because the Everglades does not exist to preserve things worth seeing, experiencing the Everglades is different than the western parks we’ll visit this summer. Here, the experience is quieter and subtler. It is not less spiritual, but spiritual in a difference sense, not so much standing in awe of the grandeur of creation but more marveling at the intricacy and complexity of the created order in its hidden spaces. As one of the rangers said, the Everglades “whispers” its message. 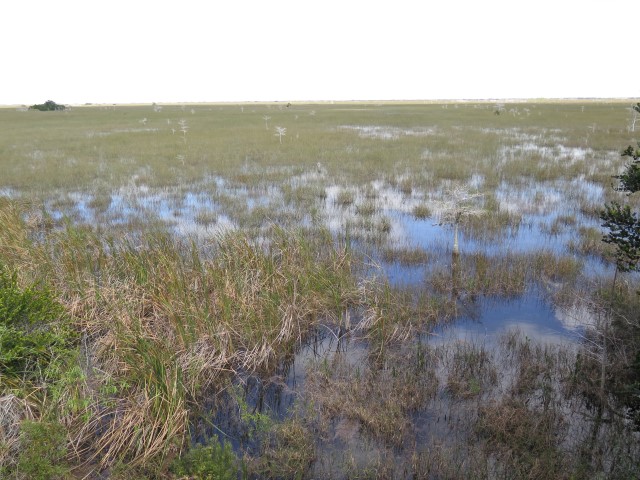 The “river of grass” at the Snake River slough, “only” 6 miles wide. 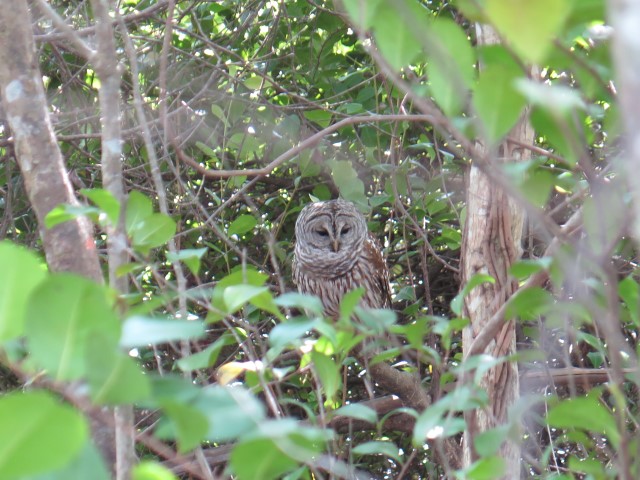 At Snake River slough, a barred owl hooting away back in a thicket.

One day we tour a boat tour through the mangroves lining the Buttonwood Canal, through Coot Bay, and into Whitewater Bay. 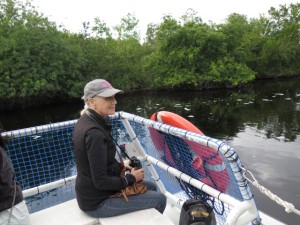 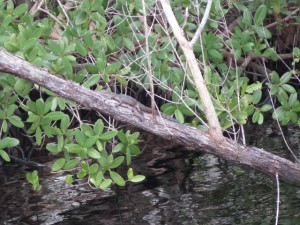 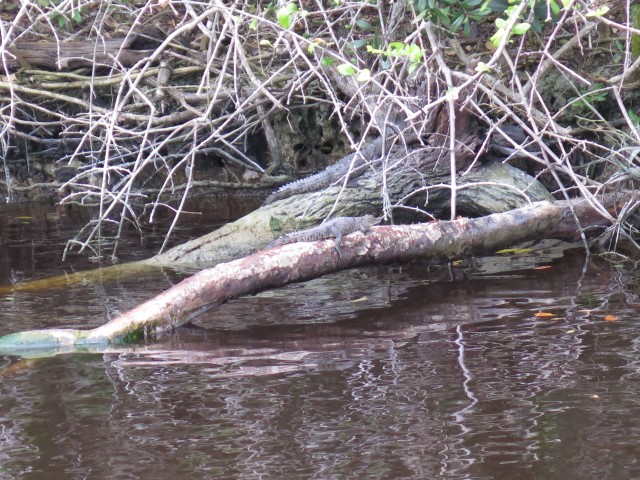 Baby American Crocodile, and no one even noticed his big brother behind him! 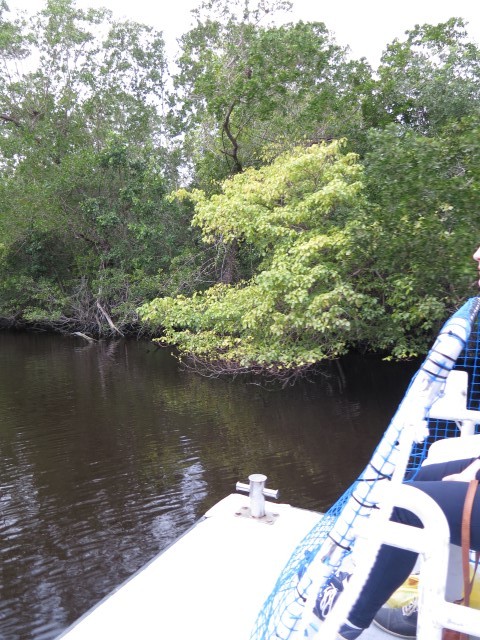 The deadly Manchineel tree: “Standing beneath the tree during rain will cause blistering of the skin from mere contact with this liquid (even a small drop of rain with the milky substance in it will cause the skin to blister). … ingestion [of the sweet, apple-like fruit] may produce severe gastroenteritis with bleeding, shock, bacterial superinfection, and the potential for airway compromise due to edema. … Juan Ponce de León was struck by an arrow that had been poisoned with Manchineel sap during battle with the Calusa in Florida, dying shortly thereafter.”

And we even did a ranger-guided canoe trip on a five-mile canoe trail out and back from Nine-Mile Lake. The trip provided a bit of comic relief since, firstly, we are old, feeble geezers who don’t know how to paddle a canoe, and secondly, the wind was howling at 15 miles per hour, gusting to 25, which meant the canoe frequently got caught by the wind and headed sideways into the swamp. Still, it was a great morning. 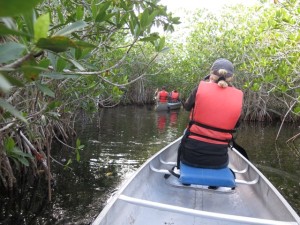 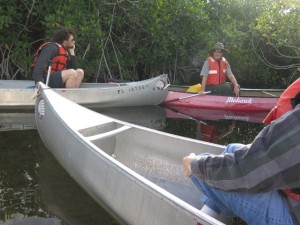 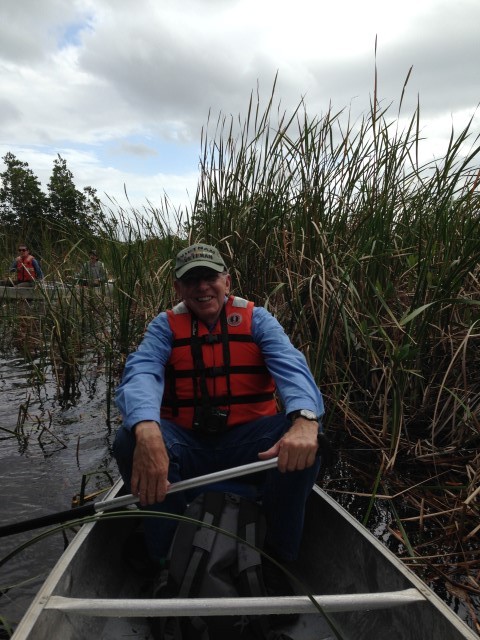 We also “experienced” the Everglades in one of its less appealing aspects: mosquitos. We’re told that this is an “unusual” winter. It may be. This winter has been wetter than usual (normal rainfall in January is 2.5 inches, but this year it was 12.5 inches), and one can imagine that the surplus of standing water has given the little suckers a windfall of breeding sites. Either way, we ventured out only when slathered with DEET and the first few moments inside the camper were always spent trying to clap in mid-air fast enough to squish the little beasts between our palms.

We took advantage of one surprising opportunity for a side trip to the old Nike missile base, now a historical site within the Park.

For people of my era, the cold war, and in particular the Cuban missile crisis, is not only part of our history, it is part of our being. It’s easy to joke about the backyard bomb shelters and the “duck and cover” drills in elementary school, but I remember, at the height of the Cuban missile crisis, going with my mom to the grocery store, and everything was gone. Everything. I stood there seeing nothing but empty shelves. No milk, no produce, no bread, no canned goods. Nothing. And even as a twelve-year old, I was convinced that war was upon us. Fireballs were going to light up the sky, and for those not immolated by blasts, it was going to be a nasty battle for survival. Memories like that formed us all, and they are part of us even today.

The crisis started in October 1962 when U2 spy planes overflying Cuba saw that the Soviet Union had installed short- and medium-range missile bases in Cuba. A missile launched from Cuba could hit Washington D.C. in 13 minutes. The nuclear warheads for those missiles were on Soviet ships headed for Cuba, and Kennedy imposed a “quarantine” (that is, a blockade) around Cuba and threatened to destroy any Soviet ship that tried to run the blockade. The Soviets said they viewed the blockade as an act of war (it is), that they had every intention of running the blockade, and would use any means necessary, including nuclear weapons, to protect their freedom to navigate the seas. Kennedy then issued his famous threat that any use of nuclear weapons against anywhere in the western hemisphere would be met with an unlimited retaliatory counterstrike on the Soviet Union. The situation was escalating to the point that the very end of civilization was seemingly inevitable.

During this time, south Florida was the scene of a military buildup not seen since World War II. Hundreds of military trucks driving down the streets, military bombers landing at every airport available, and trucks and trains carrying missiles arriving every day. Even as the crisis subsided, we all realized that the threat to our very existence could come from as close as sixty miles south. In 1965, the National Park Service gave permission to the Defense Department to build a Nike missile base inside the Park to guard against that threat. That base survives today as a historical site: Nike Missile Base HM-69. 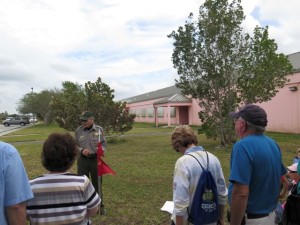 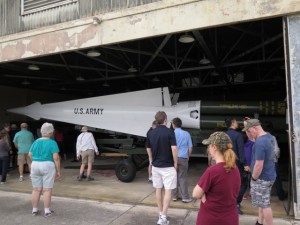 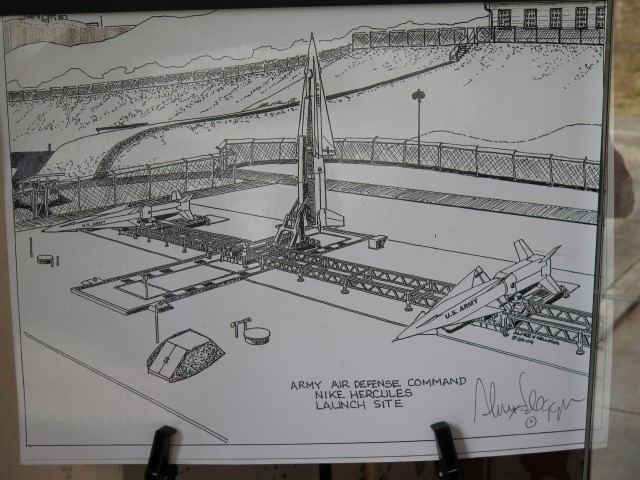 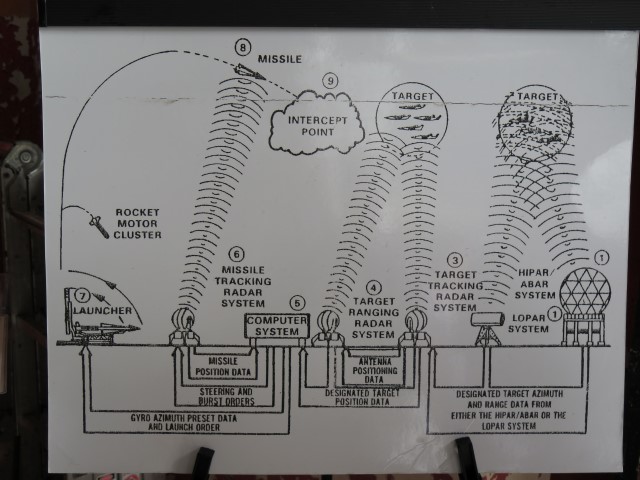 Surprisingly, even though one can hardly imagine an experience less Everglades-ish than immersing oneself in the details of mutually assured nuclear destruction, both of us agree that the tour of the missile base was a highlight of the trip.

So, once again, we find ourselves leaving too soon. Too much to do and not enough time. In a sense, that’s the inevitable consequence of racing around Florida, spending only a few days in numerous places, as we scout out possible locations to escape Atlanta winters. But in other places giving short shrift to the locale was tolerable. Here, I wish I had made the Everglades a break in the place-to-place dash and booked a stop of at least a week. It deserves it. If we can make it back someday (I hope we can), we’ll definitely spend more time here, just listening to Everglades whispers. 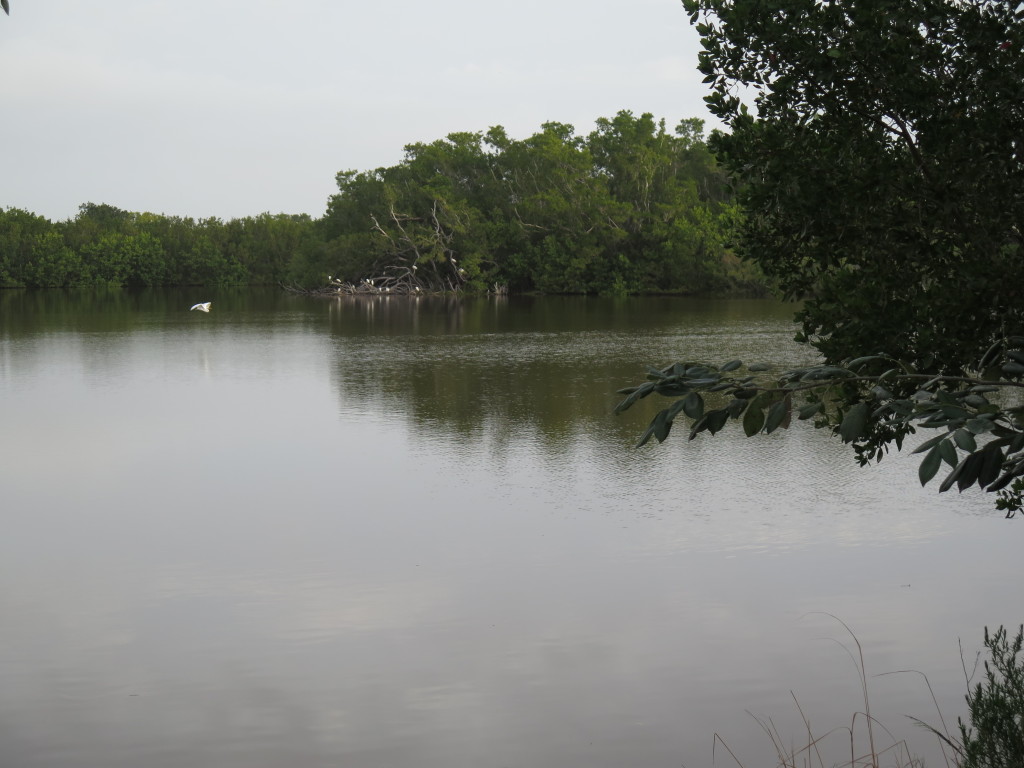