Before we arrived here at Grand Canyon National Park, we were wondering whether the park may end up being something of a let down. After all, we’d spent the past few weeks in areas of deep, richly colored canyons, spectacular forms of erosion, and towering buttes and arches. Could the Grand Canyon really measure up to all that? We weren’t sure.

Well, the Grand Canyon measured up just fine, but oddly it took us three days here to realize that. We arrived on day one too late to hit the Visitor Center, so the second day we did our usual thing: checked in, spoke to the rangers, watched the official film, got the hiking and touring information, and mapped out a plan, which began with hitting Mather Point, right next to the visitor center, and then hopping in the car to see the classic overlooks along the eastern half of the park.

Bleh. It was pretty hazy, which didn’t help, but the views were basically of a plateau that obviously had deep canyons running through it, but the canyon walls disappeared mostly without revealing their depths and the Colorado River, if it was visible at all (which it usually wasn’t) was just a thin, barely discernable blue line. The colors were muted by the haze and the dramatic, breath-taking vistas we expected basically weren’t. And plus, it was crowded. 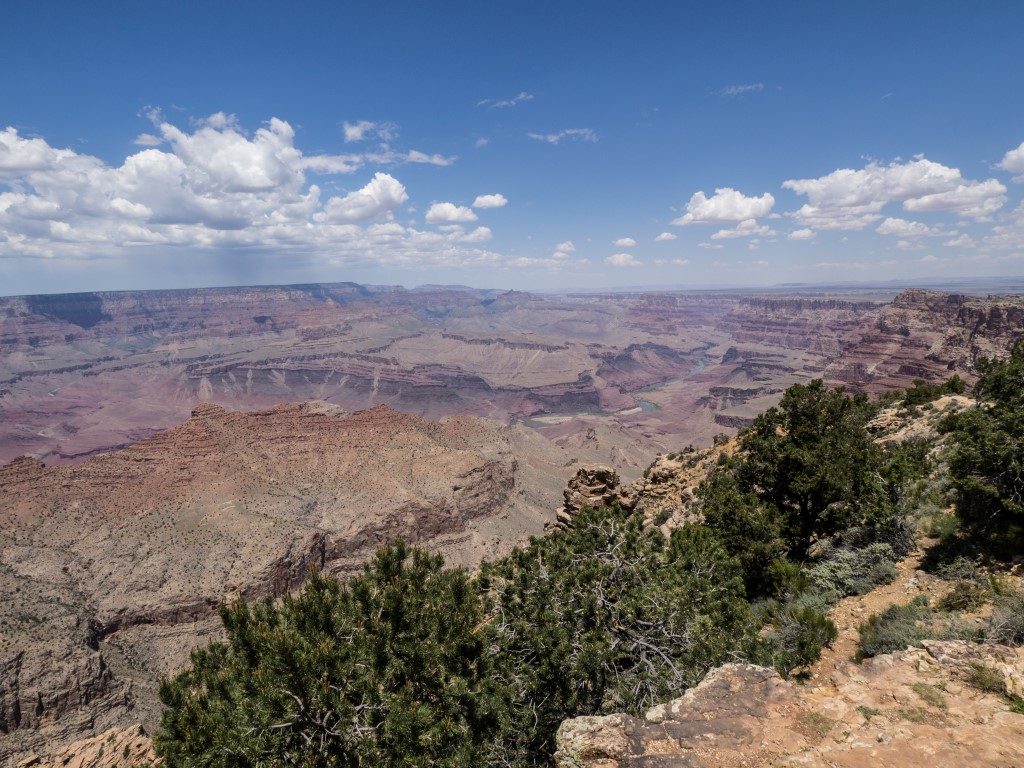 The view from Mather Point near the Visitor Center. If you click on this photo you can barely make out the Colorado River in the upper right-hand corner. It’s that teensy blue thing. So this scene is sort of interesting, but breathtaking it wasn’t. And at each overlook, the effect was the same: our breath remained safely untaken.

Plus, as we traveled from viewpoint to viewpoint, each of the views was basically identical. Some of them supposedly featured oddly-named spires and buttes (like the “Temple of Vishnu” and the “Isis Temple”), but there was little to distinguish one from the other, they mostly were blurred by the haze, and there was no guide to pick them out anyway. Definitely more bleh.

Maybe, we thought, things would be more impressive under better light, so we packed up a picnic dinner and headed to one of the recommended overlooks to photograph the sunset. Bleh. The next morning I got up at 3:00 and headed over to a different overlook to photograph a sunrise. More bleh. Later that day, we drove down to the National Geographic visitor center in Tusayan to see the IMAX film on the Grand Canyon. That showed what we expected: incomprehensibly deep canyons, dramatic colors, raging rapids, and dramatic sunsets. The problem was that none of that matched what we were seeing in person. We felt like we were running out of time and we were wondering whether our best memories of the Grand Canyon would be of an IMAX movie we saw ten miles away.

Then, on the night of our second day, things began to change. Once again we headed over to watch the sunset, but this time the light started to cooperate. Things were still hazy, but the colors of the canyons started to reveal themselves in the light of the setting sun, and the drama of the canyons was, if anything, accentuated in the muted perspective of the evening haze.

Sunset at Yavapai Point. Oddly enough, this was not one of the recommended points to photograph a sunset. We ended up here only because, as we were sitting around at a burger joint, Wendy had a hunch that the clouds were starting to look interesting and suggested we go take pictures of the sunset, and I pulled out a map and chose some random overlook that appeared to have a western exposure. (I’m beginning to think I need to do less planning and more spontaneous hunching. The problem is that I’d basically have to change my personality.)

And then things went from bleh to wow on the third day. Somewhat encouraged by the sunset of the preceding night, we decided to give the Grand Canyon one more chance (pretty big of us, eh?) and we took the shuttle bus up to Hermit’s Rest. And then, based on another one of Wendy’s hunches [someone should figure out a way to bottle her intuitions], we decided not to exit the bus at each of the overlooks as we had planned but instead to walk down from Hermit’s Rest seven miles along the Rim Trail back to the starting point. So we bought a couple sandwiches and some drinks in the Hermit’s Rest snack shop and started walking. And there, along the trail, we found the Grand Canyon everyone kept talking about. 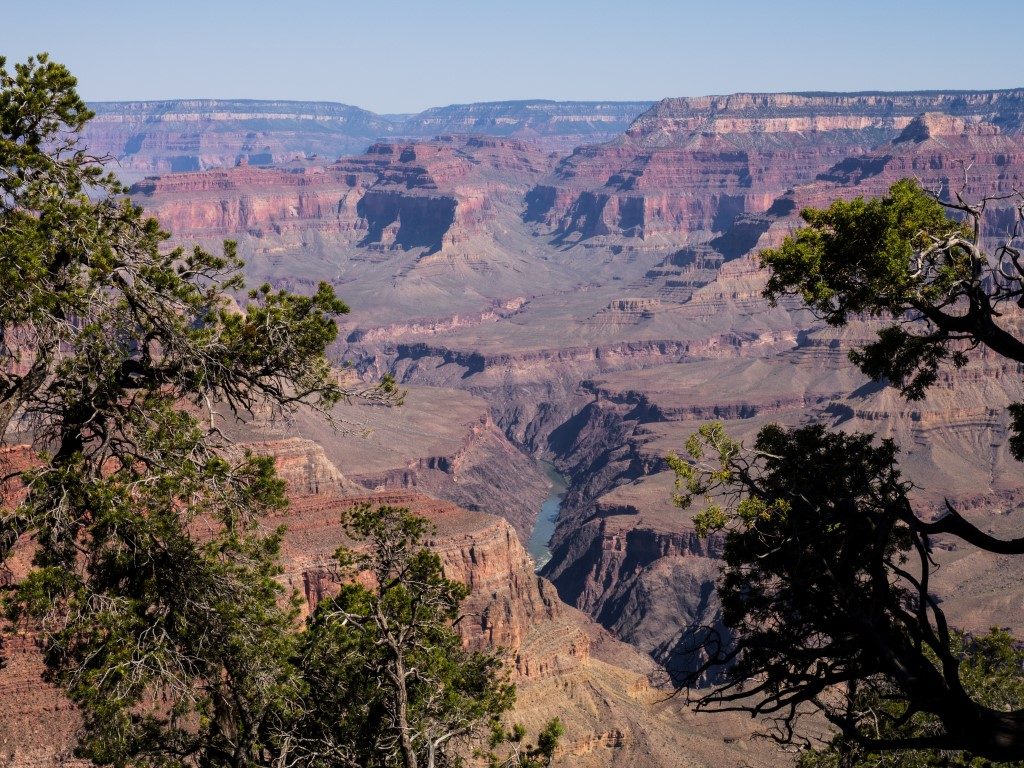 A typical view along the Rim Trail, this one only a short way down from Hermit’s Rest. The black-colored rock layers at the bottom of the canyon are, believe it or not, almost as old as the earth itself, nearly two billion years old! Then each of the canyon’s layers rising upward represents hundreds of millions of years of geological history. It’s almost as if one is looking over God’s shoulder as he’s forming the earth over billions of years, getting to watch him as his creation unfolds. 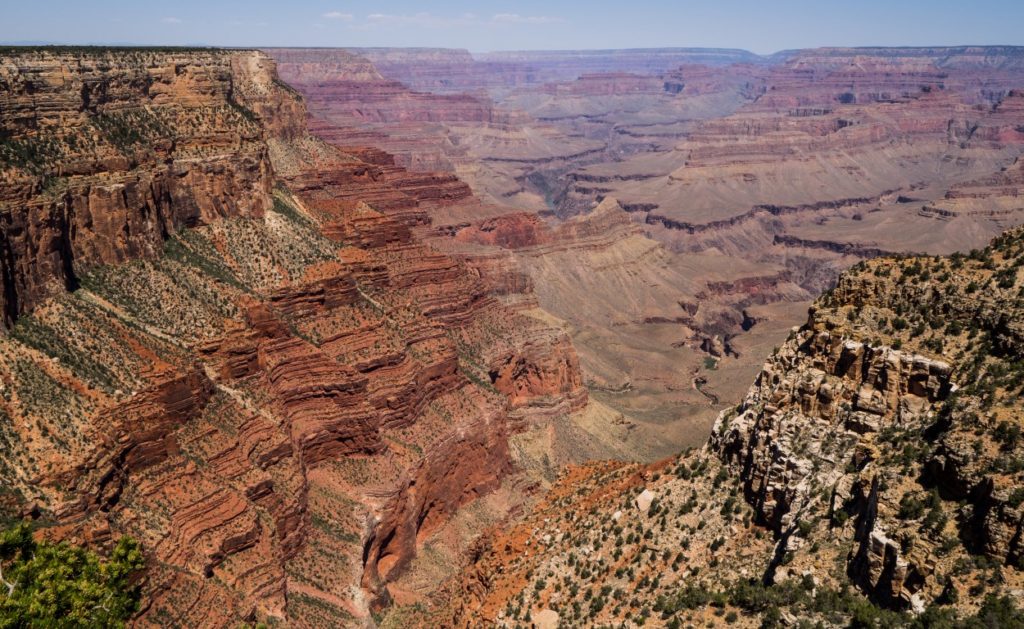 Still along the Rim Trail. As seen here, in places the canyon walls were so red that they appeared artificially colored. 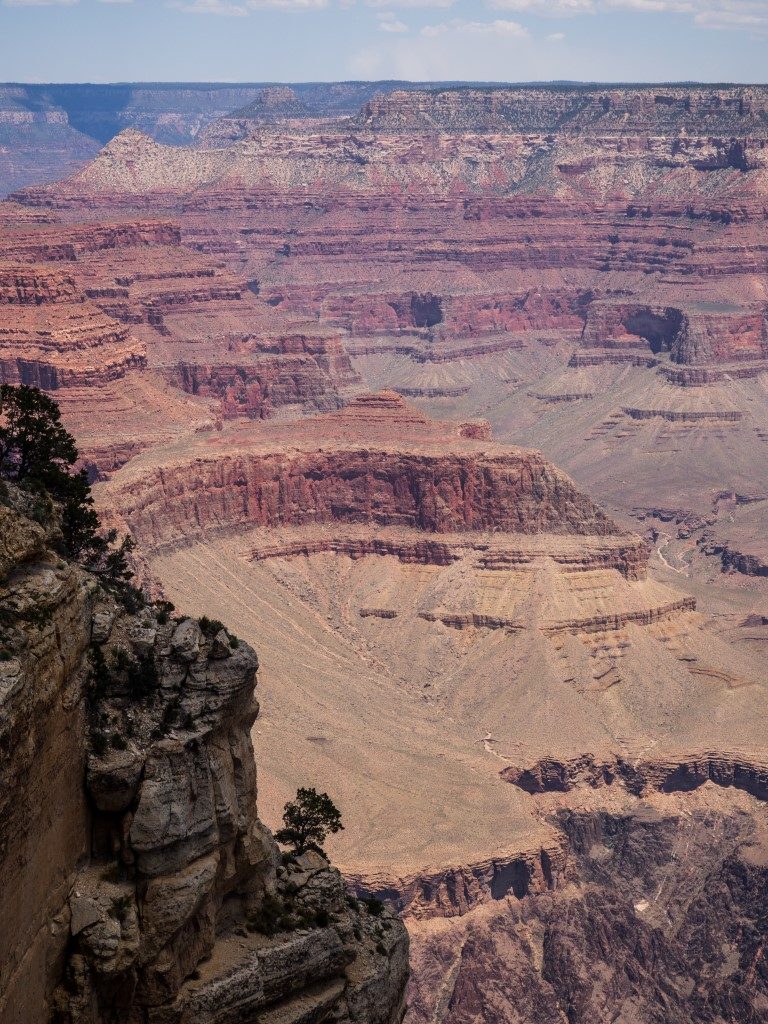 Layer upon layer of differently colored rock, plunging down about a mile into bottomless canyons. The upper portion of the Rim Trail is paved and accessible to bicyclists, which makes it less desirable to hikers like us, but at this point the trail is a dirt path, well-maintained and easy to follow, with few visitors except for occasional hikers.

And it’s not just that we got to see the vistas of the Grand Canyon that we hoped for. As is true in so many other cases, the trail, once removed even just a short distance from where it intersected the bus stops, was basically empty. Until we reached the bottom, we saw no more than a couple dozen hikers along the trail. And the park service has placed picnic tables and benches every few hundred yards along the trail, allowing one to sit and enjoy the beauty of God’s creation in silence and awe.

Just one of dozens of picnic tables and benches along the unpaved portions of the Rim Trail, each positioned to allow one to pause for a few moments to gaze over the canyon unfolding below. Incredibly, we had most of the area, including the benches and tables, pretty much to ourselves for three hours.

It’s hard to capture the real psychological effect, but that three-hour hike entirely changed our impression of the Grand Canyon. It is definitely one of the most dramatic places on earth, and it inspires a sense of reverence that is unlike anything we experienced elsewhere. I suppose we still might find the experiences at some of the Utah parks more punchy in a way. Nothing, for example, can really match the weirdness of the hoodoos at Bryce Canyon or the graceful symmetry of the arches at Arches, but the spiritual qualities of the Grand Canyon will forever hold a special place in our memories of this trip. It is true: “The heavens declare the glory of God; the skies proclaim the work of his hands. Day after day they pour forth speech; night after night they display knowledge. There is no speech or language where their voice is not heard. Their voice goes out into all the earth, their words to the ends of the world.” Amen.

We still have one more stop to make at Petrified Forest National Park (we skipped it on the way up), plus a stop to get our windshield fixed (long story), but it’s time to start heading home.