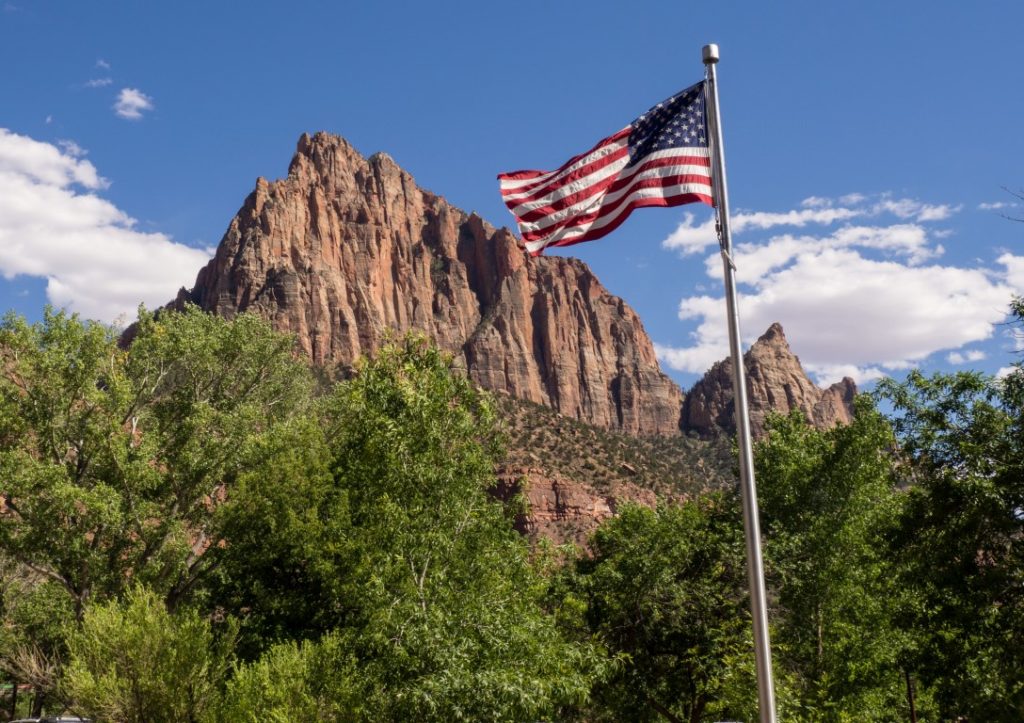 Zion National Park has been something of a mixed bag for us. The campground is spectacular (the photo above was taken about 100 yards from our site, looking up at “The Watchman,” which appropriately watches over us every night) and the Zion canyon itself is breathtaking (more on that below). But this place is seriously overloaded and, for the first time in our travels, we’ve had only limited success in figuring out how to negate the effects of the crowds.

This is probably the worst crowding we’ve ever seen at any national park. Like Manhattan crowded. No, more like Tokyo crowded. At one point, there were so many tour buses jammed into the museum/welcome center (seven, we think) that they closed off the parking lot, the shuttle buses could not get in, and people could not get back to their cars. The hike on the “River Walk” up to “The Narrows” was like a New York sidewalk, with people elbow-to-elbow, pushing and shoving, as they were barely able to creep along. A few days ago, there was a two hour wait to get on the shuttle buses. When we took the shuttle up the canyon (cars are prohibited, thank goodness), this is the line we had to wait in: 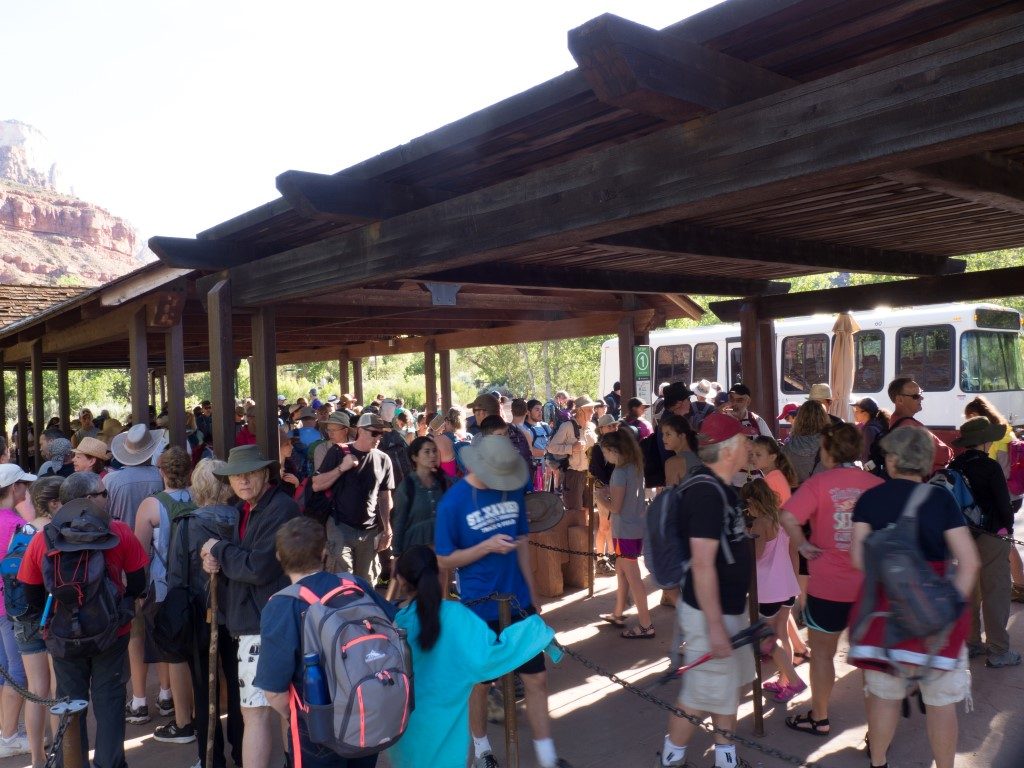 This wait was only about 15 minutes, even though the line snaked back-and-forth in Disney World fashion for about six circuits. In watching people lining up to get on and off the buses, which often had standing room only, I was reminded of those scenes of commuters being crammed into Tokyo subway cars with giant plungers.

The effect of the crowding was compounded by three factors. First is the arrangement of the park itself. As with Arches, the layout of the park is such that there are only a few points in the park where people are dropped off to see the sights. Eight, to be precise, and since cars are banned, it is eight places and only eight places. Second, the number of visitors is more than the park can accommodate. On a recent peak day, the park had 45,000 people in attendance. Essentially all of those people are crammed in and around those precious few eight stopping points. Do the math… it’s not pretty. Finally, being as tactful about this as I can be, there is a problem with the nature of the population. Zion is very close to Las Vegas, so it attracts travelers consisting of a mix of those who are not interested in traveling to any remote location and who, well, are the kind of people who find Las Vegas to be a desirable add-on to their “national park experience.” They all seem to be urban types for whom crowding and density are a necessary corollary to modern life and they are quite good at importing urban “manners” to their visit to the park. And, for them, this probably just another stop on an American vacation itinerary that consists of New York, Chicago, Las Vegas, Zion. That’s the mix. Plus, well over half of the visitors seem to be foreigners who have little knowledge of or interest in conservation of wild places in the American conceptualization of that principle, and therefore seem to have no interest in abiding by the norms of visiting an unspoiled location.

The net result is that for us, several times and for the first times ever in our 45-plus years of visiting national parks, we had the feeling of “get me out of here.”

But, on the other hand, this place is stunning and once away from the crowds, this place is definitely a must-see. Really. This is as beautiful a location as anywhere we’ve ever been. 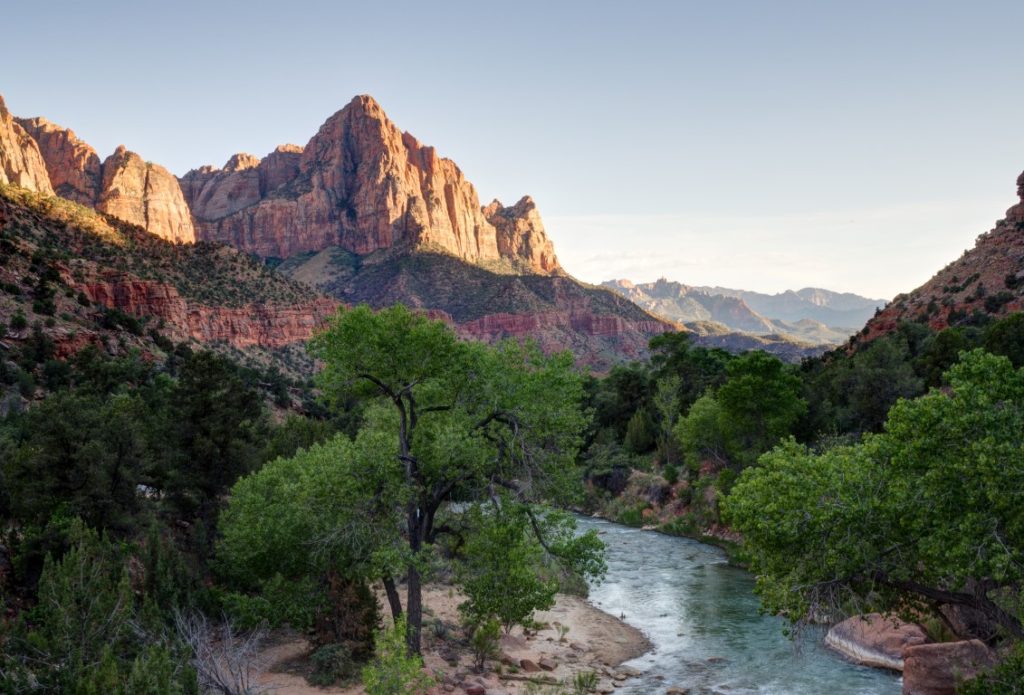 The Watchman, with the Virgin River flowing through the park. By sunset, the crowds were thinning out and it was actually easy to get this shot. 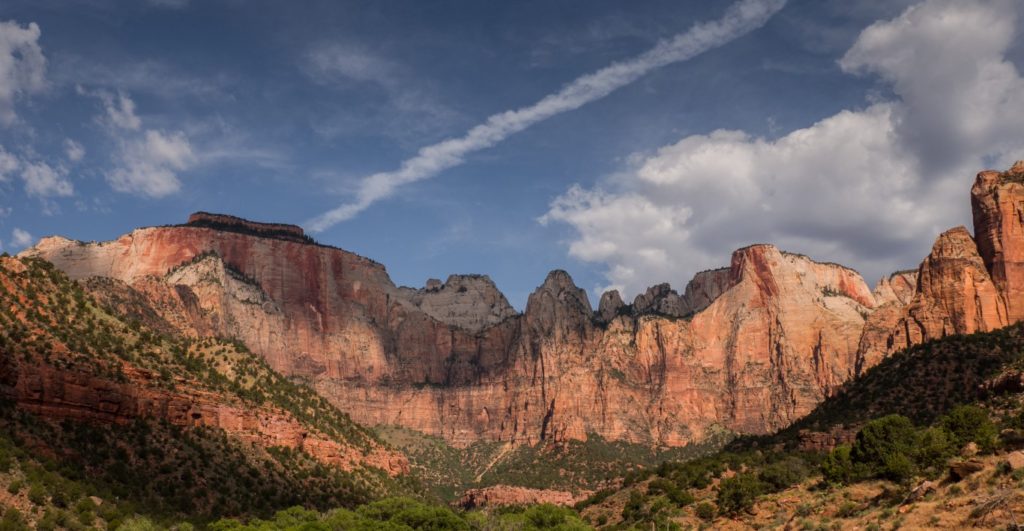 The “Towers of the Virgin” as seen on an early morning ranger-guided tour. The tour was not only excellent (it focused on the history of the Mormons in this area), because it was (1) early in the morning and (2) a closed group escorted by a ranger, it was free from the crowding that we encountered under other circumstances.

And there were times when we got away from the crowds. For example, we spent one day visiting Kolob Canyon and Kolob Terraces, two little-visited areas of the park (probably because the roads are so winding and narrow) (and for part of the trip, dirt) that tour buses cannot manage the route. Over the entire trip, we saw maybe a half-dozen people.

Kolob Canyon. To get here, one has to drive about 20 miles outside of the park, drive north on I-15 for 15 miles, and then take a narrow, winding, marginally terrifying road up through the canyons. But the views are spectacular.

On a hike to the “Emerald Pools,” which was fairly jammed with people, we continued on past that photo-worthy spot and, once beyond the location where the selfie-crazed tourists were gathered, the crowds completely dissipated and we had the views to ourselves. 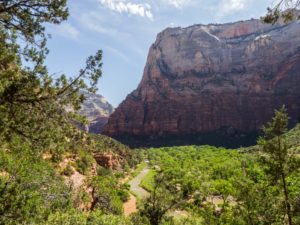 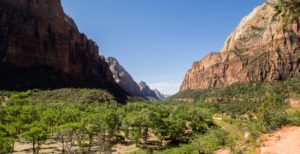 Even on the hateful “River Walk,” Wendy discovered a dirt path next to the river, away from the paved trail up to The Narrows, that was once again people-free. 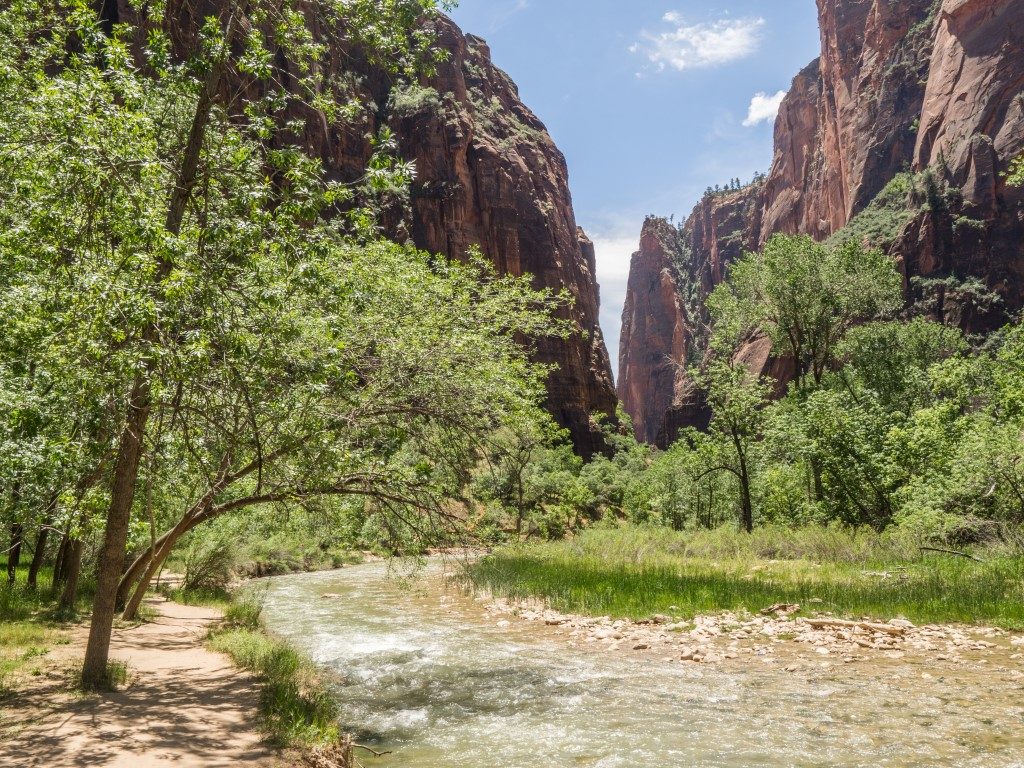 About 100 yards to the left of this tranquil scene are thousands of people, shuffling along in dense crowds, apparently feeling quite at home in the experience but oblivious to the beauty that lies just a few feet away.

And late one day we took off for a moto-touring drive to the east side of the park on the Zion-Mt. Carmel road, and had a wonderful time, relatively immersed in a wild place, as evidenced by this:

A herd of Bighorn Sheep, all females with a couple lambs. Wendy spotted these as we were driving along, gave the command for an immediate stop and we spent about an hour watching them feeding among the rocks. 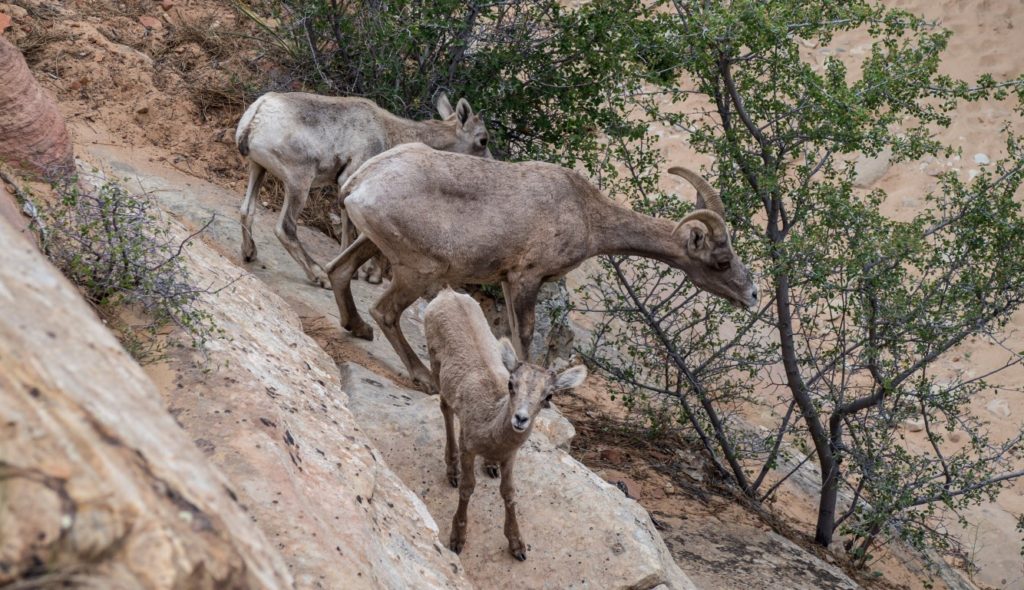 As the sheep moved off the rocks, this little guy spotted me, apparently wondering why that thing up above him didn’t have horns. We never did see Daddy Bighorn.

So, of the Utah parks, while this is certainly one of the most beautiful, we’d probably say this was our least favorite. Perhaps it would have been better earlier in the season, or perhaps, unfortunately, this is just the future of the national park experience.

In any event, next stop is the Grand Canyon. Further updates to follow…