We’ve started the 2017 western trip, having blazed through Livingston, Louisiana (nice RV park), survived the pavement hell of Louisiana and Eastern Texas, stayed overnight at Columbus, Texas (OK, but not up to our standards), and finally arriving in San Antonio. At first, we weren’t sure we’d even make this stop, seeing as how we were trying to orchestrate our stops to spend the smallest amount of time meandering along through places with little to commend them. But neither of us had ever been to San Antonio, so what the heck? It’s on the way, sort of, so a couple days layover made sense.

And we are really glad we did. Tops on my list was going to the Alamo. 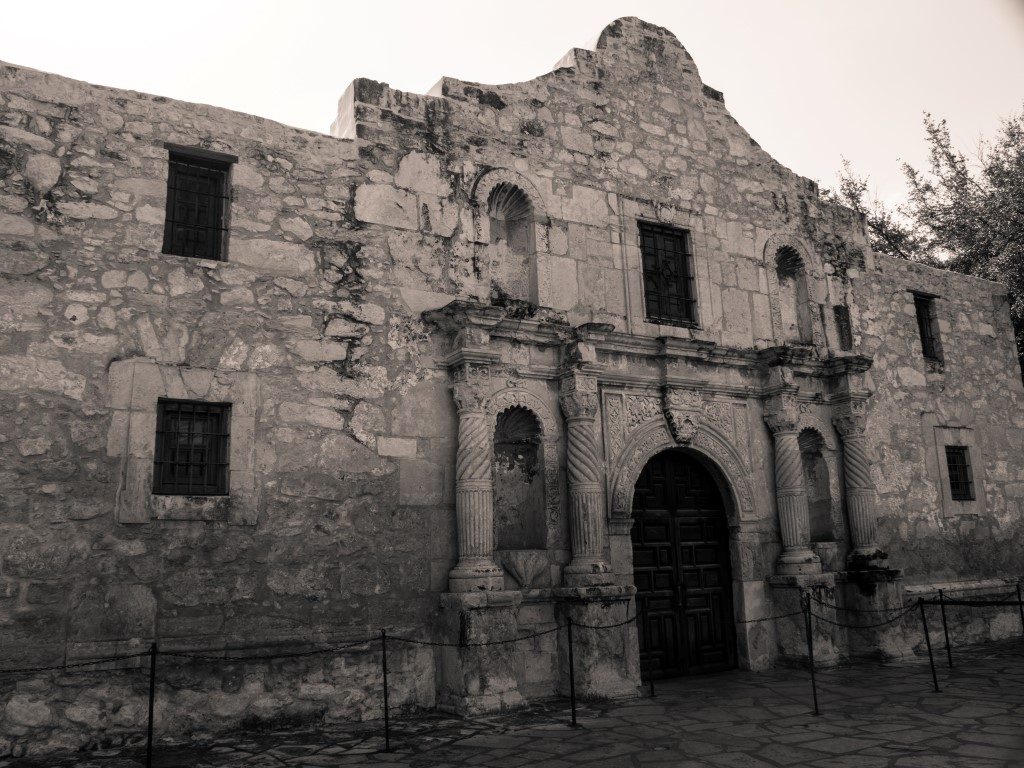 I didn’t realize it, but this is *not* “the Alamo.” This is the church inside of what was the Alamo. The Alamo, as it existed in 1836, extended several blocks in all directions. Unfortunately, most of that area is now developed and only this church, and a small surrounding area, survive.

The legend of that battle has been imprinted on my mind since elementary school, but what we learned on our visit is that reality is even more dramatic than the childhood stories we all grew up with. It’s hard to imagine: 150 volunteers, plus or minus, against a determined army of maybe 10 times that number; Santa Ana’s raising of the red “no quarter” flag; and the last-minute realization that help would never arrive. In these circumstances, William Travis called the men together and said, in essence, “Look, here’s the deal. Reinforcements are not coming. We cannot defeat an army of this size, and if we stay and fight, the result is certain death for all of us. But we fight for principles that matter and we only have two other choices: surrender or flee, either way announcing to our countrymen that freedom and liberty are not worth dying for. It’s not for me to tell you what to do,” and then, drawing his sabre and carving a line in the sand, he continued, “but I intend to stay and fight and die right here, because I believe liberty, and patriotism, and everything that is dear the American character are worth dying for. And I ask any man who’s willing to stand with me to cross this line.” At that moment, every one of the volunteers (save only one!) crossed the line. And they stayed and fought, dying either in the ensuing battle or, if wounded and captured (including, perhaps, Davey Crockett), when lined up against a wall and shot.

The rest, as they say, is history. As has happened so many times over our history, the enemy’s “victory” inspired a sense of American outrage, which led to an overwhelming response, which led to a crushing defeat of Santa Ana and his army, which forced Santa Ana to save his hide by signing a treaty relinquishing the territory, and the Republic of Texas was born. As often as this pattern of events seems to repeat itself, Wendy and I sometimes wonder whether our national motto should be changed from E Pluribus Unum to Non Ursa Poke.

Our second objective was San Antonio’s famous River Walk. In 1921, a disastrous flood hit San Antonio, and the city planners did what such people always do in such cases … they decided to channelize the portion of the river that ran through downtown, and then pave over it. As it turns out, though, they encountered the dreaded little-old-ladies-in-garden-clubs contingent. Under the impetus of that formidable force, the idea of channelizing the river remained, but it’s flow was regulated by an upstream dam and a plan created to develop the corridor. Later on, through the efforts of the WPA, some 17,000 feet of walkways, bridges, and landscaping were added along the channel. Over the years, the number of restaurants, bars, and shops increased, the size and layout of the River Walk changed and grew, and it now stands are one of the most successful urban projects of its type, serving as a model for countless other developments, including the Little Sugar Creek Greenway in Charlotte, NC. And it is completely charming. 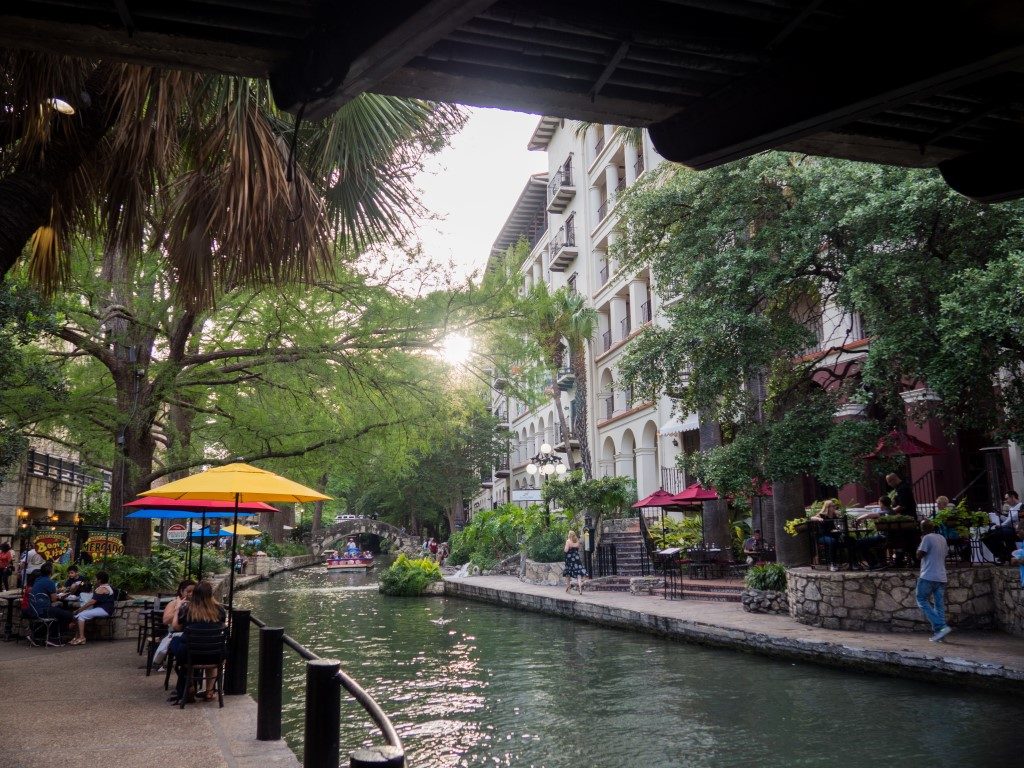 It’s hard to describe the stunning beauty of the River Walk. This is not a fake picture. This is a snapshot I grabbed as we strolled along the path one night. Even more, our visit to San Antonio also coincided with the city’s annual “Fiesta” (sort of a Hispanic version of Mardi Gras), and as we had dinner one night at a River Walk restaurant, we were treated to periodic concerts by passing boats filled with high school Mexican bands (guitars, violins, trumpets, and all that) gearing up for their upcoming competitions.

Oh, and one more thing. In one of those improbable coincidences that proves something, Son #1 had a business to San Antonio while we were there and we met up for dinner! 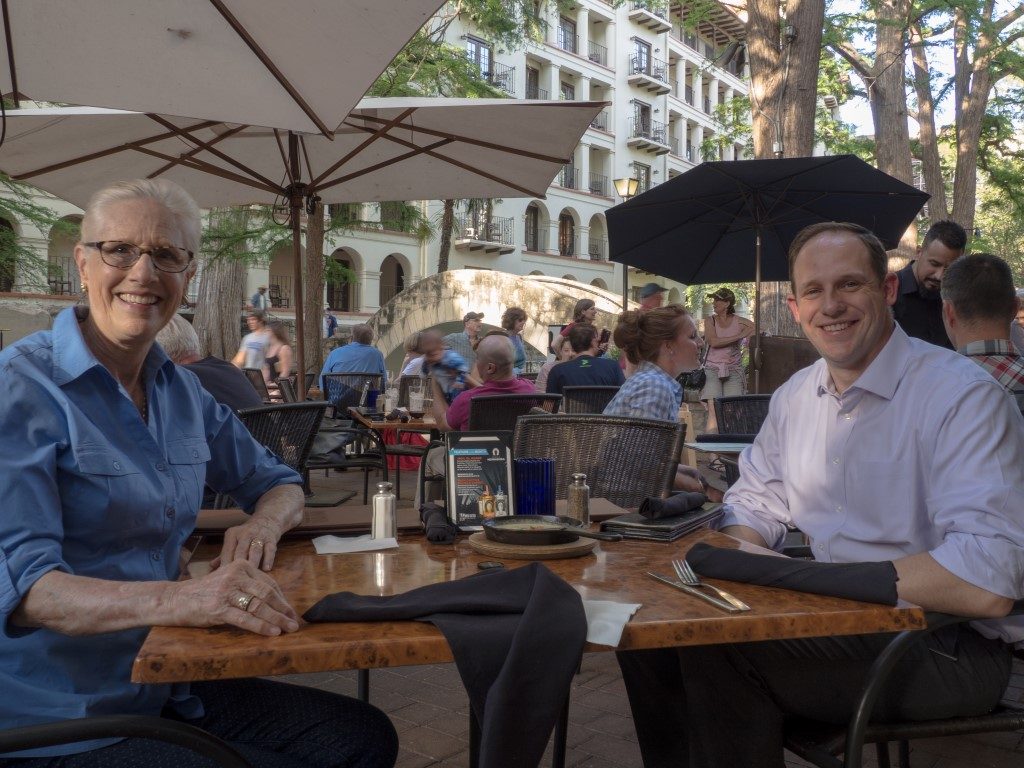 Sitting along the River Walk, with Mexican bands in the background and enjoying, let’s see … a few margaritas, a couple glasses of wine, two hors d’oeuvres, exceedingly large entrees, and two orders of crème brulee. Such things are what make travel “broadening” (at least in the sense of girth).