We leave in a couple weeks for this year’s trip out west (more on that below), but prior to the trip it was time for our “traditional” pre-trip campout with the with Little Darlings. I say “traditional” because we did a pre-trip campout once, and the way our family works, once is enough to create a tradition. And once a tradition is established, we can never not do it because, well, it’s a tradition. All of which leads to a geometrically expanding list of spontaneously generated random obligations. And I put “we” in quotes because Wendy is out in Seattle with the other Little Darlings, spending Easter with Laura while Robert is deployed, and wasn’t here for the campout.

This year’s campout was a great success, although not for the reason I expected. Cliff selected the location (FD Roosevelt State Park), which is only 30 miles from the LaGrange house, so I went over early to snag the best sites, Cliff showed up around noon, and Jennifer showed up mid-afternoon. We all assumed that we would occupy ourselves with an excess of activities at the campground and nearby Callaway Gardens. Some that turned out to be true, and in fact we did ride bikes at Callaway, go to the butterfly house, have a picnic lunch, and watch the birds of prey show. 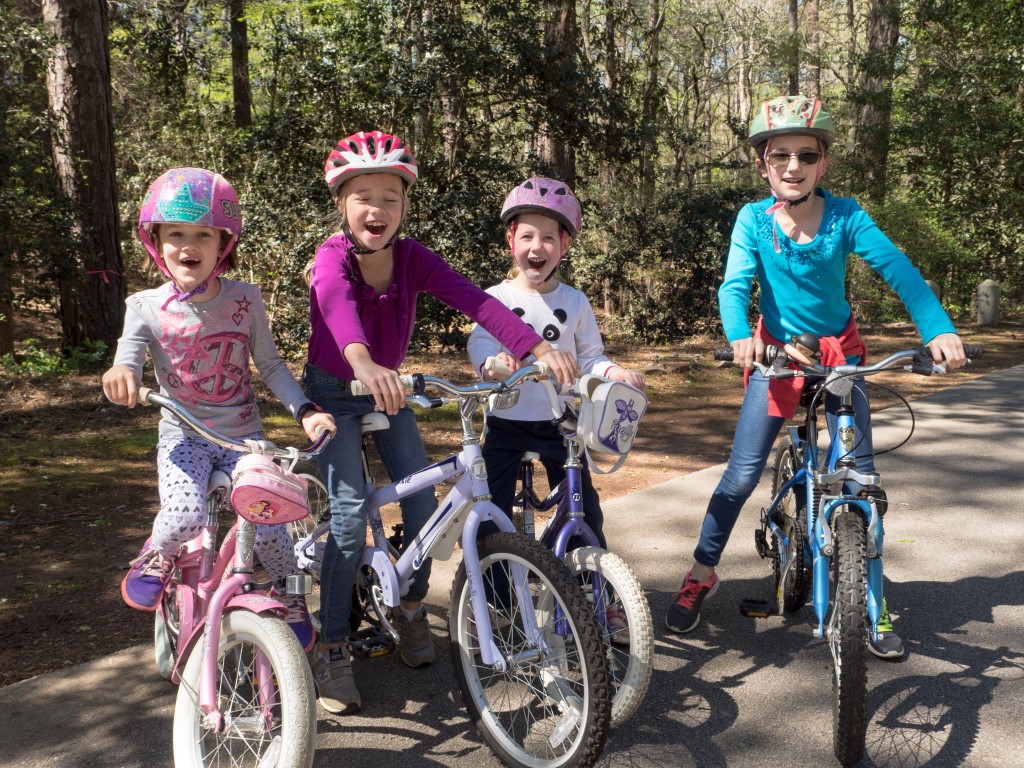 Riding bikes from the Discovery Center to the butterfly house, a distance we thought would prove too much for the younger cousins. Not so, though. All of them showed themselves determined not to quit. I have no idea where they got that trait.

But what most occupied us was the girls’ fanatical commitment to geocaching. For those not familiar with the activity, geocaching involves using a GPS (or a GPS-enabled app on a smart phone) to find various “caches” that others have hidden in the woods, often containing little dime-store trinkets that one can exchange for other dime-store trinkets brought along for just that purpose. An good description of geocaching and all that it entails can be found on the Geocaching 101 website.

What an experience!! Four little girls, racing around the woods with smart phones in hand, clambering over each other in a frenetic drive to find the cache and exchange trinkets. For three days, the geocaching frenzy ran unabated. “Please, please can we go geocaching? Please, Grandpa, please, please…” First it was two caches near the campsite, then seven caches along a loop trail, then I’m not sure how many on another hike. And we also logged the “official” FDR State Park cache. Most of the state parks have official caches and I got each of the kids a “Georgia State Park Geocaching Passport” book. After getting a certain number of state park official caches, the kids are eligible for souvenir coins. (As you might expect, adding a reward like earning coins to the process only made them more fanatical.) 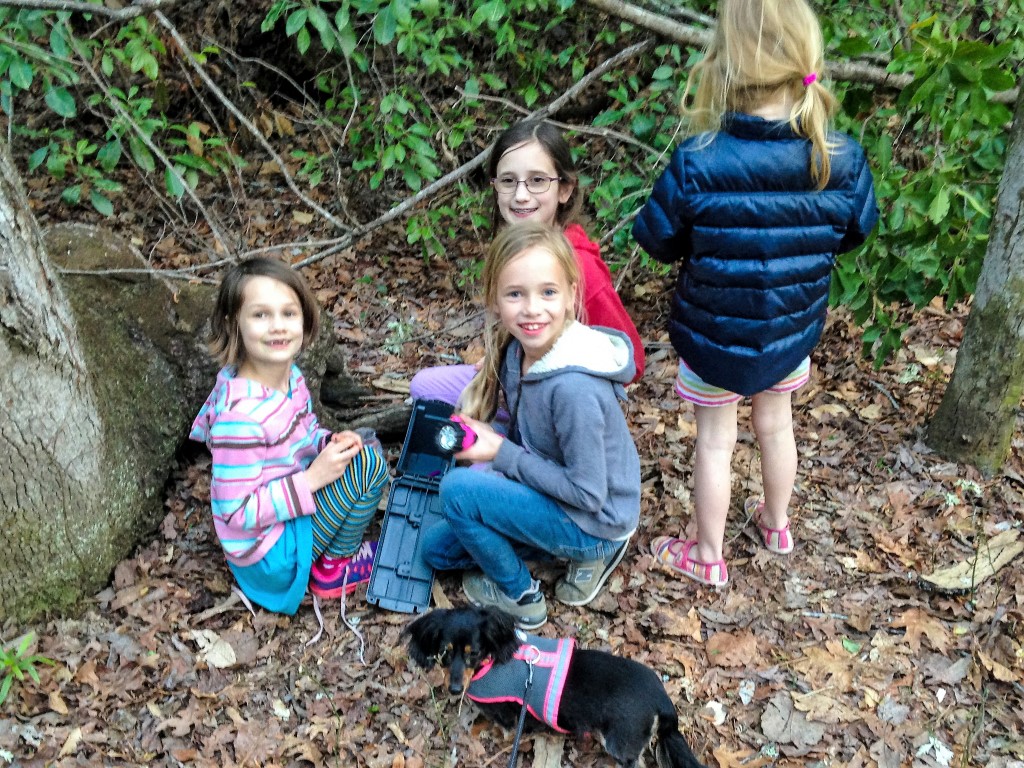 I forget which cache this is, but it’ll give you the idea. The cache was contained in an ammo box hidden under some rocks about 20 yards off the trail. The app we used (Cachly) displays a compass with an arrow indicating the bearing and range to the cache, and then it’s a matter of following the app until close to the cache location, at which point it becomes a challenge to figure what the dastardly owner did to make the ammo box hard to find.

The kids had a total blast and the experience gave me grounds for optimism as well. Except for the usual risks of running around in the woods, which are numerous (ticks, rattlesnakes, slippery rocks, cuts, bruises, poison ivy, etc.) but usually not totally fatal, geocaching is a completely fun activity for kids, and the grownups can turn the kids loose and let them have as much UNSUPERVIZED fun as they want. I read an article once that noted it wasn’t that many years ago, certainly during my lifetime, that except for the time when they were actually in school, kids were basically free of adult supervision by the time they were eight years old. Heck, we used to jump on our bikes and ride to school at that age, and to the park, and to the “wash” (a dry river bed), and the ball fields, and the local 7-11, and the parents had no idea where we were or what we were doing. The only requirement is that we had to be home “by the time the street lights come on.” Living that way not only required parents willing to let their kids loose at what appears nowadays to be an early age, it required children willing to venture out without someone at hand to protect them. On both counts, those days are gone. Good grief, it sometimes seems like even college students nowadays can’t survive on their own without adults providing them with safe rooms and pacifiers. So, I’ve wondered whether the biological/psychological/emotional capabilities that allow parents to leave their kids alone and kids to thrive on their own have been lost. Nope. A campground is the perfect place to turn the LDs loose and let them do whatever they want, and adding geocaching to the mix and letting the kids run around in the woods, on their own, unsupervised, makes it even better.

So, with the pre-trip campout in the books, it’s now it’s time to get ready for the trip out west. This year’s trip will take us to San Antonio, Big Bend National Park, up to Carlsbad Caverns and White Sands, then to Tucson to visit Wendy’s sister, then up to Petrified Forest National Park, Mesa Verde National Park, Blanding (Utah), all five Utah national parks, and then down to the Grand Canyon. With the exception of Mesa Verde, I’ve never been to any of these places. Forty-seven days and 5300 miles. Further updates to start in late April.