We started off this leg with a quick overnight stop to see two of our favorite people on earth, Harold and Jeneve Brooks, who recently moved to Dothan. 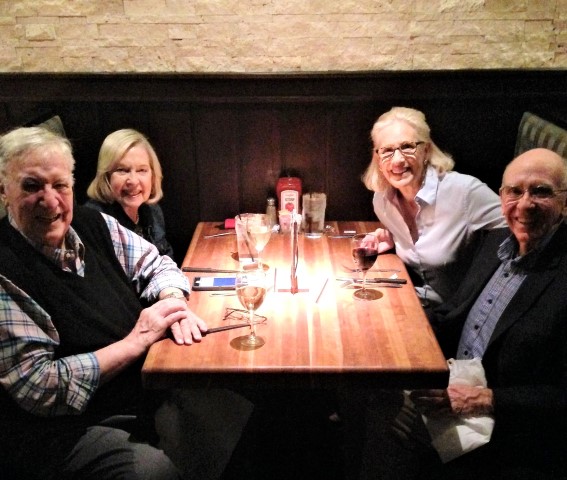 Dinner at the Brooks’ favorite local restaurant. And yes, we’re Presbyterians. Wine is not a sin, it’s a sacrament.

Then it was off to Topsail Hill Preserve State Park. Well, it’s not exactly a “state park.” It’s a former high-end RV resort that was turned over to the state, who operates it as a park. In any event, we’ve been coming to this wonderful campground for years, which caused me to wonder whether we ever get to the point where our assessment evolves to “been-there-done-that” and we look for somewhere else as a destination. Nope. In fact, we decided that next time we come here, next year I hope, it’ll be for an even longer period, like maybe a couple weeks. And here’s why.

There were a couple experiences, not guaranteed to occur from year to year, that can make Florida in the winter a wonderful destination. 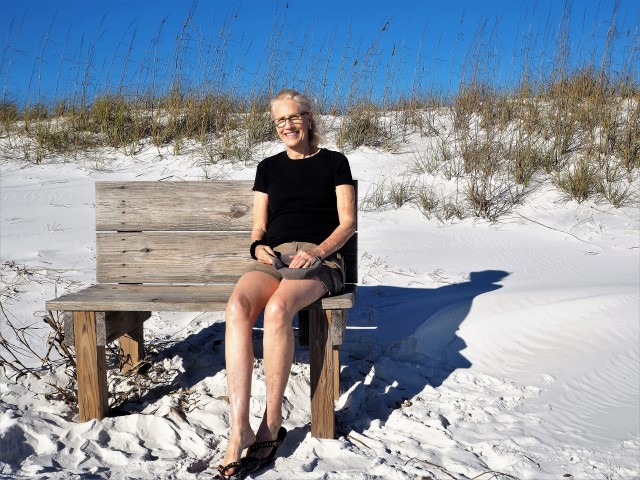 Unbelievably perfect weather … crystal clear, blue skies every day, temperatures in the mid-70s, and white sand beaches for miles with very few people. Of course, last time we were here, we hit freezing temperatures, with snow and sleet. 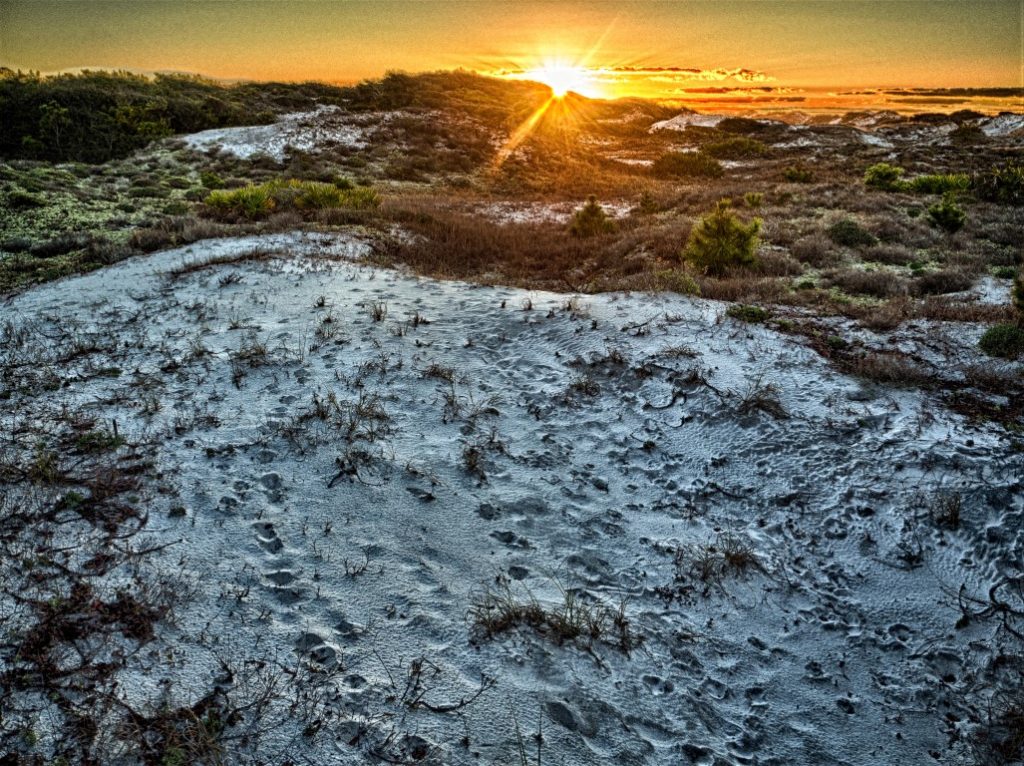 Sunrise over the dunes. Unfortunately (?), I was cursed (?) with perfect weather, which deprived me of a chance to take pictures with dramatic clouds at sunrise or sunset.

And a perfect day for a bike ride 8 miles down the Highway 30A bike path to Grayton Beach State Park. 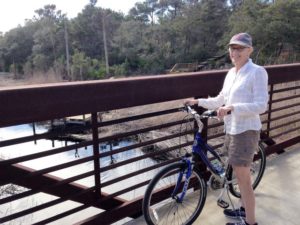 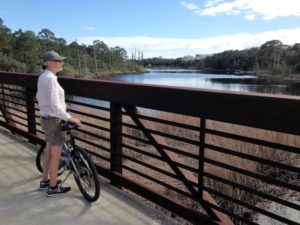 But what occurred to us on this trip, and one of the main reasons we’ll be back, is that there’s an unlimited number of things to do that either we never grow tired of (like the Naval Aviation Museum in Pensacola, something we didn’t get to this year), or nature talks by rangers, like this one on sea turtles: 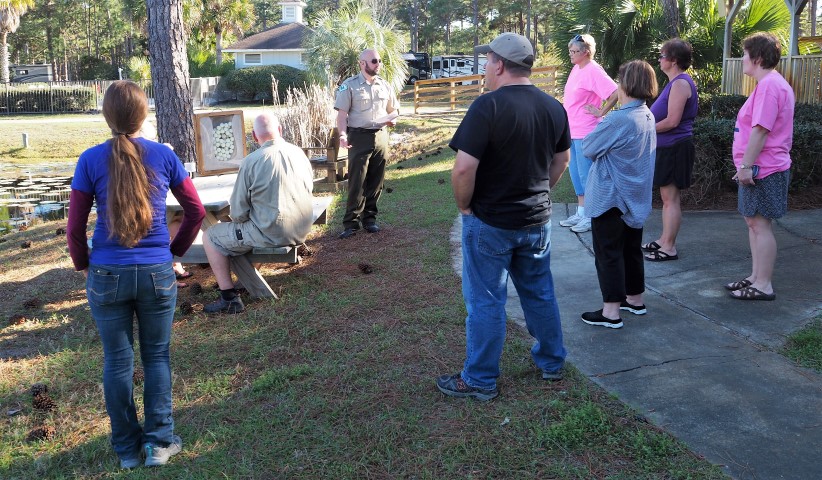 “Ranger Nick” explaining that the Topsail Hill Preserve area is not only nesting grounds for three different species of sea turtles (Loggerhead, Leatherback, and the endangered Green turtle), this year it had more of them than any other area in Florida.

Or an infinity of little known, rarely visited places that are special for us, like these memorials to the soldiers and Marines who lost their lives in a helicopter crash near Navarre on March 10, 2015. We stopped here only because Wendy just happened to see a small blurb about the memorial in one of those dippy little magazines put out by the Chamber of Commerce. 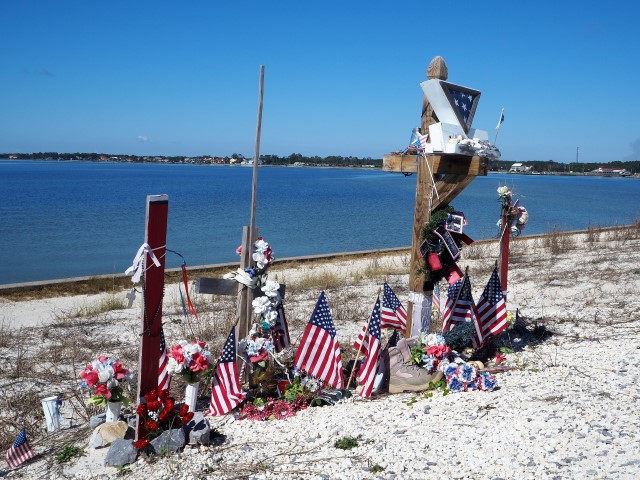 A makeshift memorial along the roadside between the mainland and Navarre Beach island: flags, mementos from family and friends, and flowers. We met the city maintenance guy who said that, even though this “memorial” isn’t really a city display, he stops here every day to keep it neat. It’s his way of “paying his respects.” 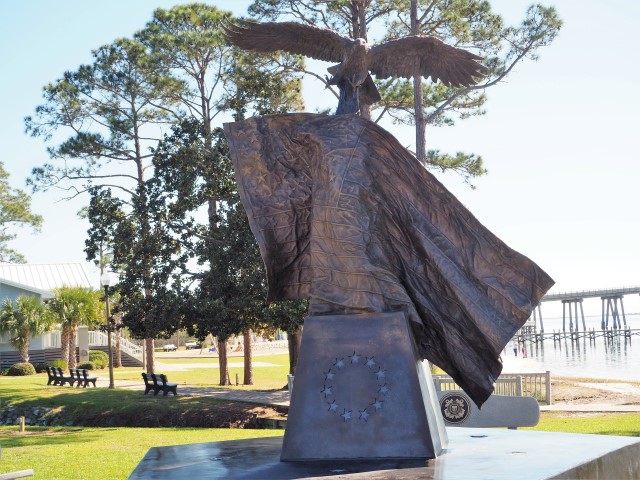 The memorial was especially important for us, not only because of a son who is a Blackhawk pilot, but because the crash occurred during a training mission in unimaginably terrible weather. When asked whether the weather was acceptable for a training mission, a military spokesman said, “Training in adverse weather conditions is not unusual for military personnel. We train as we fight.” Indeed. In a world where trepidation is increasingly common (this week featured a national news story where thirteen DC-area schools cancelled all outdoor activities, no kidding, because a 7-year old female bobcat named “Ollie” was discovered missing from its pen at the National Zoo), this memorial serves as a reminder that there are brave people who not only put their lives on the line when deployed to combat, they do it every day, day in and day out, to keep themselves ready to go if needed. And sometimes, even readiness demands the ultimate sacrifice.

Our only complaint? Florida seems to be unbelievably hostile to dogs. Dogs are banned from beaches, parks, picnic areas, and paths. Good grief. I guess it figures, though. Here in Okaloosa County, we learned that the word “oka-loosa” comes from the Seminole phrase meaning “no dogs.” Really. [I was going to insert something here about enhancing our travel options by having the dogs put to sleep, but since the last time I did that it caused people to line up in support of the dogs, I’ll skip it this trip.] Oh well, a small price to pay for a special place.