We started off Wednesday morning with a breakfast with princesses in the Akershus Dining Hall in EPCOT. Well, first Michelle and Rachel had to get suitably attired: 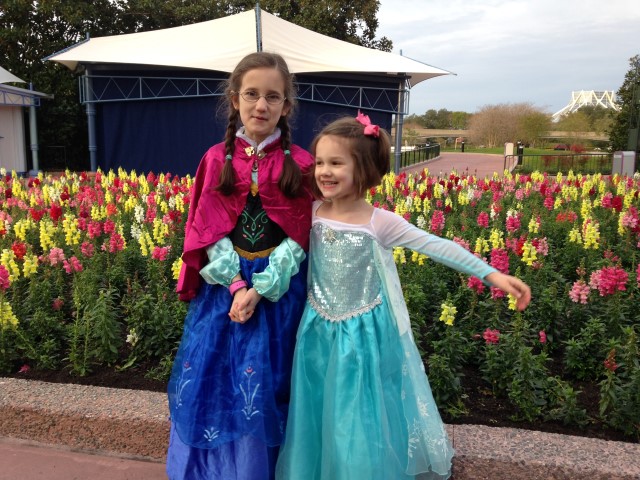 It would be easy to adopt a cynical eye that would see the whole princess thing as nothing more than a brilliant marketing strategy crafted to suck even more money out of an already overspending population of Disney visitors. Even avoiding cynicism, for those of us whose children experienced Disney in the 80’s, it’s easy to ask, “Where did this whole princess phenomenon come from?” I mean, 8:00 in the morning and the EPCOT lines are filled with dozens of little girls in various princess outfits. I heard one mother recounting her daughter’s visit to the Bippity-Boppity-Boutique to get her hair done prior to the princess breakfast. Really?

But then at breakfast it hit me … whatever else one might say, this really is magical. Somehow, this experience creates the purest form of unadulterated, starry-eyed joy in young children, something you can literally see in their eyes. And if someone sits in the middle of this miraculous occurrence and can focus only on the corporate economics of the whole thing, there’s something wrong with that person’s soul. 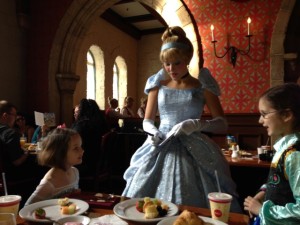 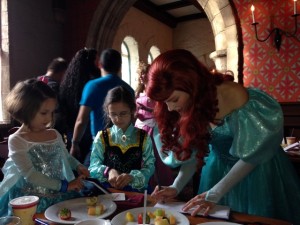 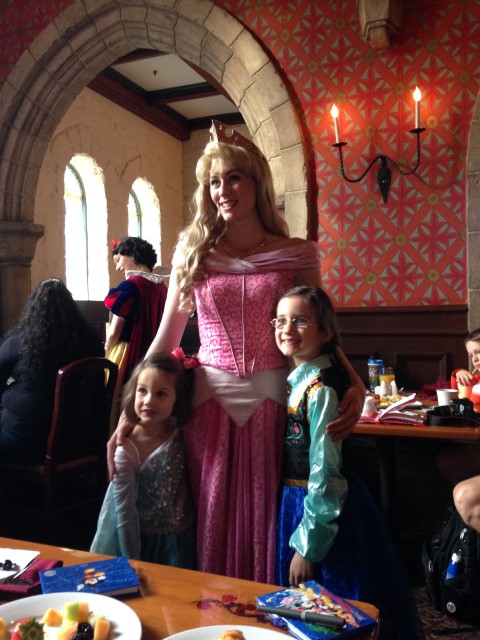 And then, of course, for the rest of the day, EPCOT is, well, EPCOT. Soarin’ is beautiful, Test Track is a ton of fun (although, near-terrifying to the Little Darlings), and the other attractions (Spaceship Earth, Living with the Land, and I can’t remember what else), are all appealing in different ways. And ending it at the French Chefs restaurant, at Michelle’s insistence, was the perfect way to end. Michelle even insisted on ordering, and trying (!), snails.

Thursday it was off to the Magic Kingdom. More rides, and more insights into why Disney deserves every penny the company makes. The People Mover ride broke down–I don’t know how a ride that is nothing more than little rubber-wheeled trollies that run on a concrete track could break down, but it did. We sat there for 15 or 20 minutes before someone came by and escorted us out of the ride. But as we exited, each of us was given a FastPass+ ticket good for any ride in the park. For those not familiar with the concept (a group that included me just a few days ago), a FastPass+ allows one to pre-reserve a preferential entry at the most popular rides. Some of the FastPass+ available slots sell out immediately when available (which is, I think, 60 days before arrival). There’s a limit a limit of three FastPass+ reservations that one can hold. And the passes can only be replenished once all three are gone and then only one at a time and only if slots for a ride are available. So a FastPass+ for a popular ride is a very valuable commodity, and Disney gave one to each of us just for getting stuck for a couple minutes! Really! This is great! 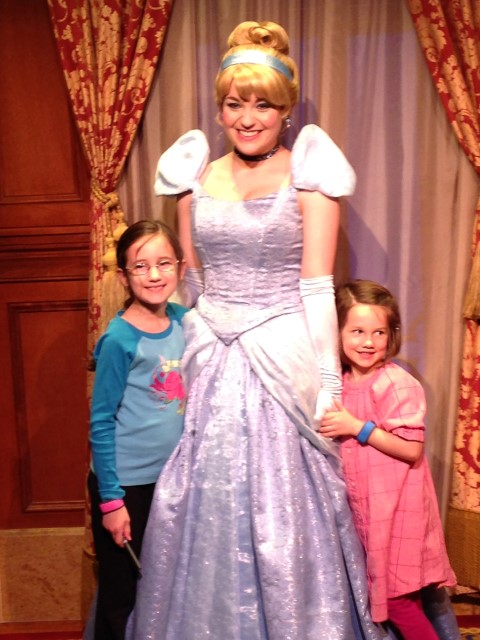 Friday: Hollywood Studios. I’m told that I once visited this park, but if so, the memory of it has disappeared into the crevices of ossified brain tissue. More fun rides and a very clever play area mimicking Honey I Shrunk The Kids. 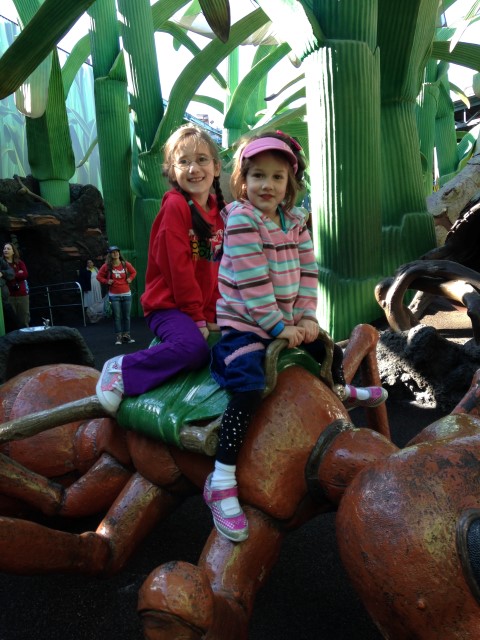 And of course, more princesses. But this one, the Frozen sing-a-long, was magical in a wholly different way. While telling the story of Princess Anna and Queen Elsa with live actors and clips from the movie, the account was interrupted from time to time with bouncing-ball sing-a-long songs from the score, and the auditorium was filled with hundreds of children singing. By the time they got to Let It Go, the voices were accompanied by gestures, all synchronized and perfectly matched to the movie on-screen. Like a ballet performed with the hands … What a sight to see. 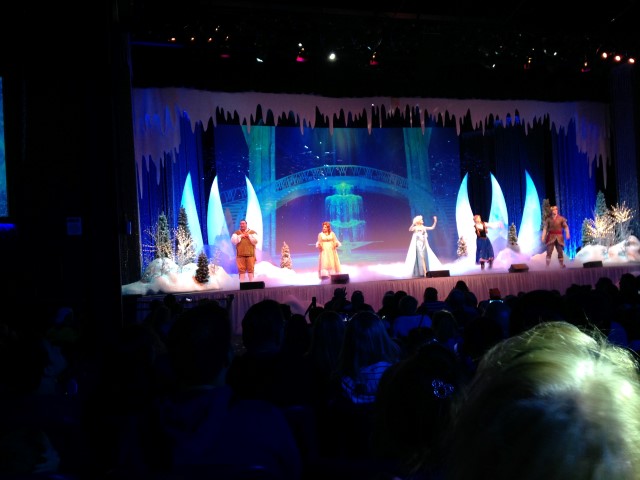 Finally, to close out the day and the trip, a return to an old family favorite: the Hoop-Dee-Doo-Revue. It was of course a foot-stompin’ good time, but the Little Darlings liked it most of all, literally laughing out loud and clapping their hands, an experience enabled in large part because we were literally sitting up against the stage. 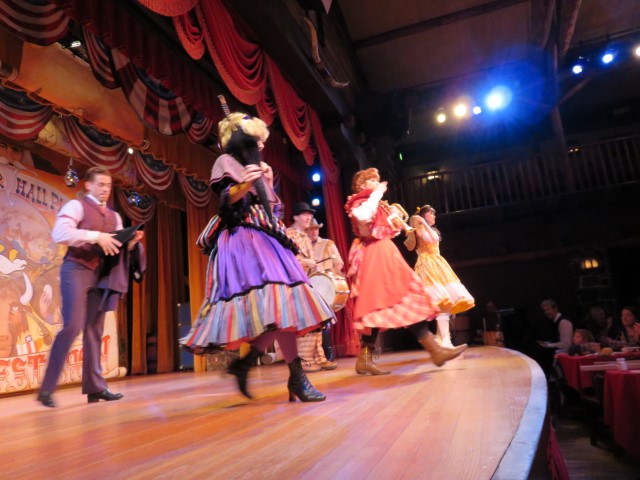 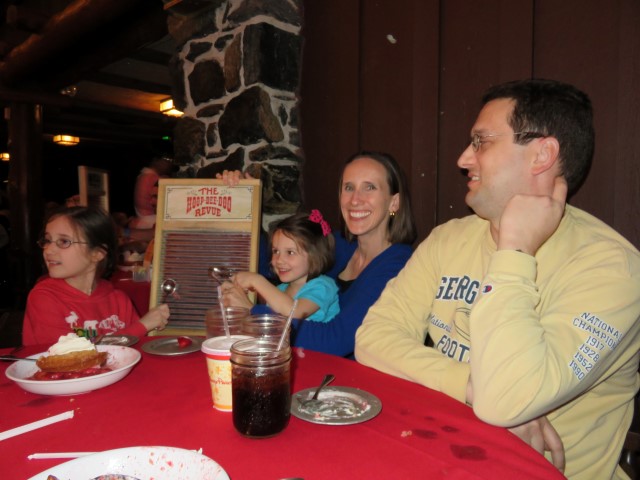 Saturday — nothing but chores and getting ready for the next leg of the trip. So, we did 6 loads of laundry, cleaned out a week’s worth of accumulated dust, tended to a few items, sat around in the sun, and toured around Fort Wilderness on our bikes. Besides–we had no choice anyway. Our little dog Sally has come down with some terrible digestive affliction and, believe me, you don’t want to know the details. The bottom line, though, is that we definitely do not want to leave her alone in the RV for any extended period of time.

Overall –Due largely to the efforts of my daughter, this trip came together in a way that I never could have done, starting with the idea of doing the time when the girls are at this age. And the selection of attractions (and pre-arranging the correct collection of FastPass+ tickets), and the decision as to when to call it quits each day (“Better 10 minutes too early than 10 minutes too late…”), also made the experience completely perfect.

I once met someone who attended the Disney Institute, a corporate training and development organization that teaches companies the secrets of the Disney model: “We pay extraordinary attention to the details surrounding general business processes. We strategically place emphasis that is both greater than and different from what is typical in corporate best practices.” Other companies out there: go do the Disney thing!

Maybe that’s why I love this place. I really do. I love everything about it. The campground is the best implementation I’ve ever seen. Every aspect of the theme park experience–the attractions, the “cast members,” the layout, the entertainment, everything–reveals attention to excellence. I know I’m repeating myself from the initial post, but it’s worth noting again the truth of what one visitor happened to remark to me: “I guess if you’re not happy here, there aren’t a lot of places where you’ll be happy.” Truer words never uttered.