[Updated 23 Nov 2018 to add another photo that won an award and to add some new photographs from Great Smoky Mountains National Park. I’m still limiting this page to 20 photographs, which means some pictures that I really like will have to go. Boo hoo.]

As we travel around, I’ve been fortunate enough to take some photographs in some of this country’s most beautiful and dramatic areas. This is where I’ll post some of my favorite shots, plus a few that, although not part of the RV touring adventure, I like enough to post here. First, some pictures that actually won awards…

June 2017: Arches National Park. One morning, Wendy and I met a Ranger for a hike back into the park, and as we were walking the rising sun lit up the rock formations, leading to some very dramatic landscapes. This photo won “Best in Show” at the Georgia Nature Photographer’s Association (Roswell Chapter) annual photo contest (October 2018). 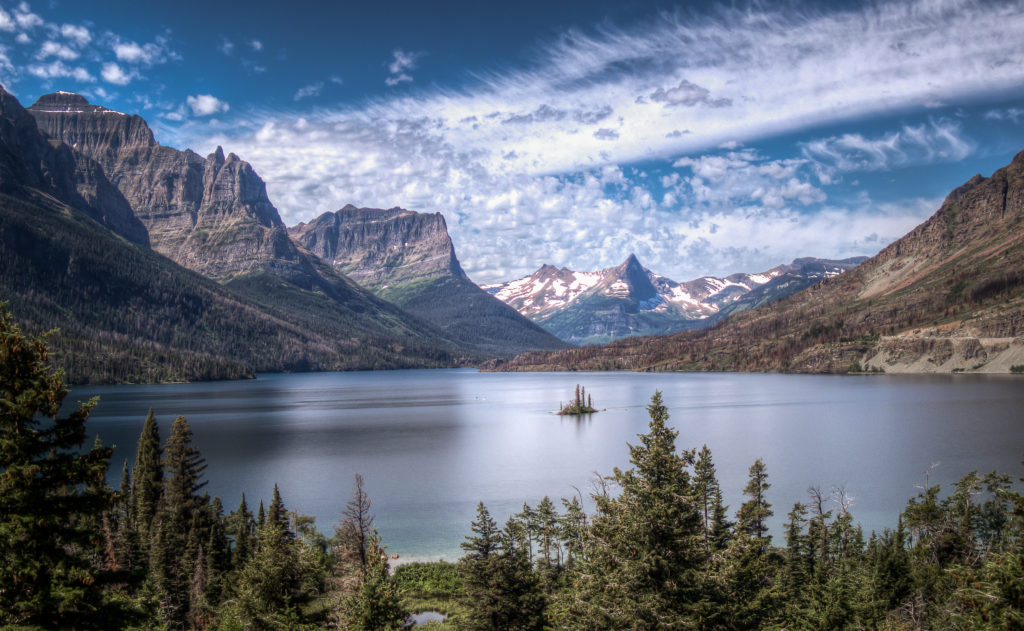 July 2016: Glacier National Park, St. Mary’s Lake. Taken from a turnout at the far end of the lake. There was a photographer nearby using a large “view camera” (that is, a camera that uses 8″ x 10″ sheets of film), so I had to move over to stay out of his way. This shot won 1st Place in the Georgia Nature Photographer’s Association (Roswell Chapter) annual photo contest (October 2018). 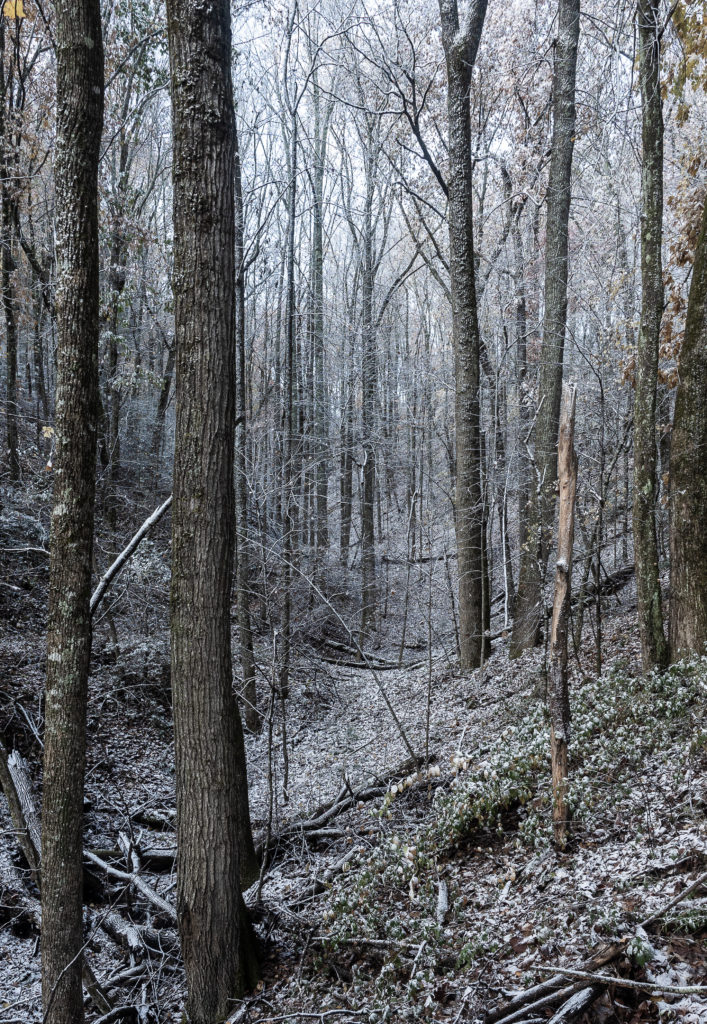 November 2018: Laurel Creek Road in Great Smoky Mountains National Park. On my annual trip to GSMNP with the Georgia Nature Photographers Association, there was a light dusting of snow at higher elevations. As I was driving to Cades Cove one morning, the white covering on the grounds and branches, combined with the dark trees, combined to make the effect almost like driving through a black-and-white photograph. This picture won 2nd place in the landscape category. 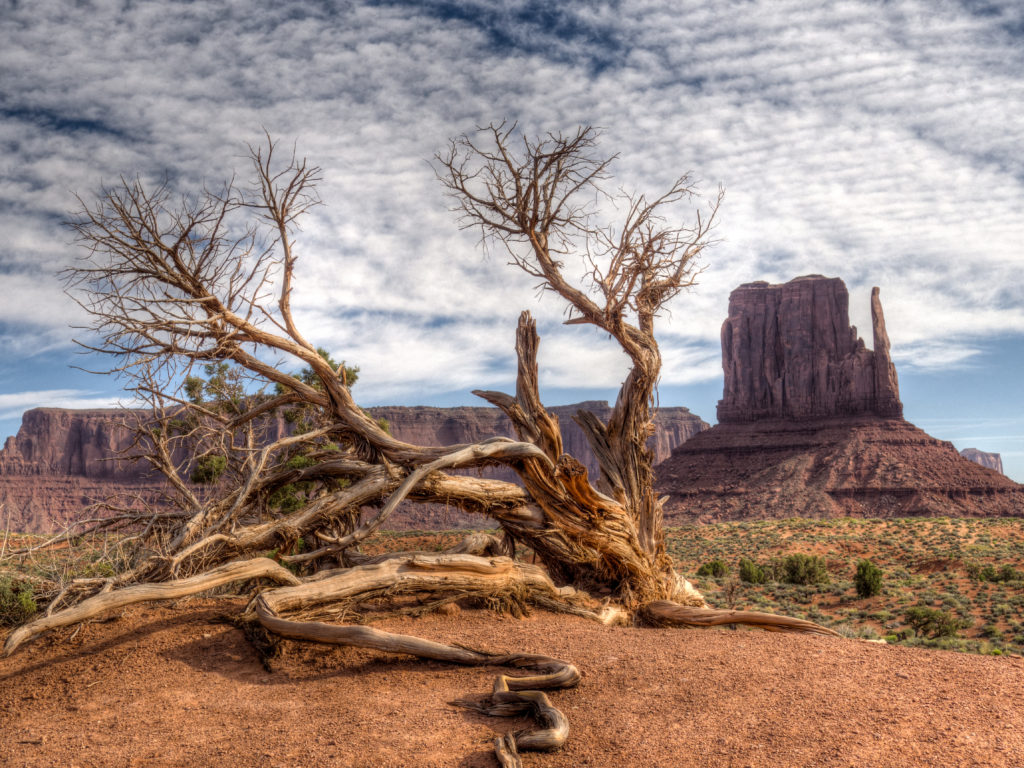 June 2017: Monument Valley, AZ. Driving around the loop road in Monument Valley there are numerous shots of the formations from different angles. This particular view, with the juniper in the foreground, presenting a stunning mix of textures, struck me as particularly photogenic. This shot was selected as an entry in the Atlanta School of Photograph student show (2018), and then won 3rd Place at the Georgia Nature Photographer’s Association (Roswell Chapter) annual photo contest (October 2018).

June 2017: Monument Valley, AZ. This shot was originally taken in color, but since the colors were so washed out, I converted it to black and white. This shot won 3rd place in the Georgia Nature Photographer’s Association (Gwinnett Chapter) “In the Footsteps of Ansel Adams” photo contest (February 2018). The judge said my picture was either 3rd or 1st, but he decided to go with a different picture for 1st that was taken in North Carolina to show that he was not “western-centric.” I understand not wanting to prejudice the judging against eastern landscapes, but it’s hard to beat the west for drama.

Now, just an assortment of other shots that I like… 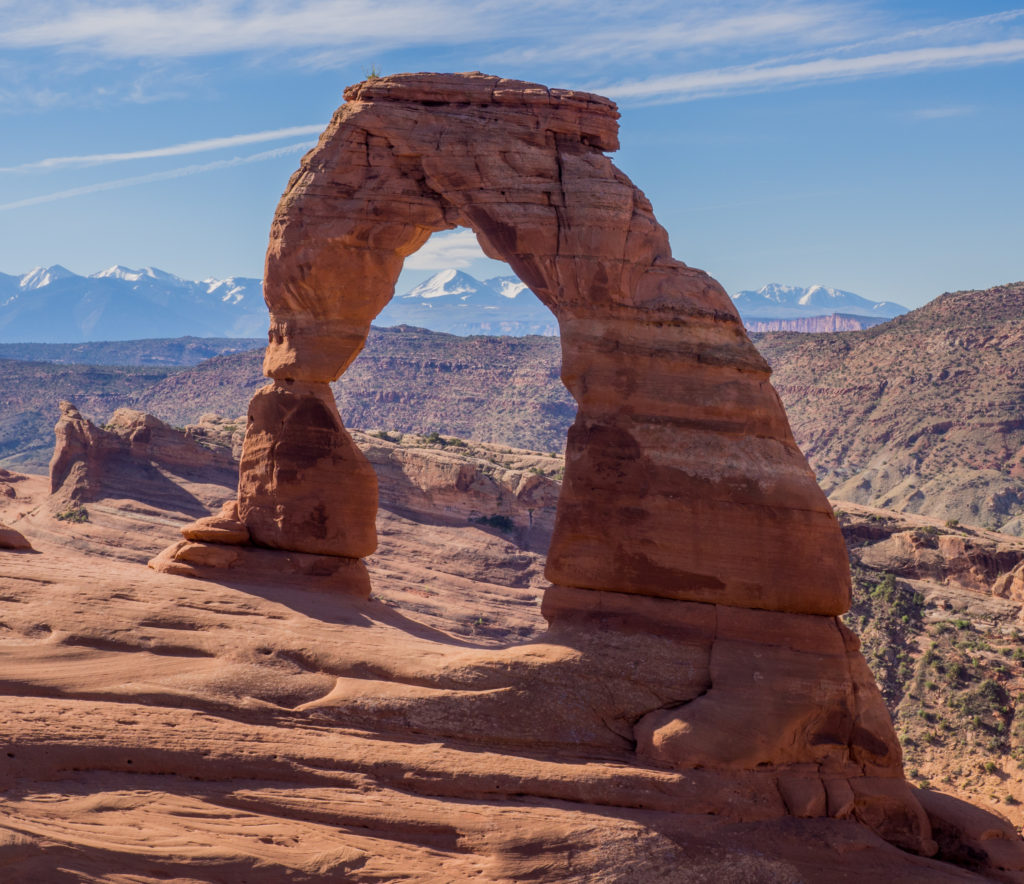 June 2017: Delicate Arch, the iconic arch of the park. And yes, those are actual snow-capped mountains in the background. No wonder this scene was chosen for the Utah license plates. 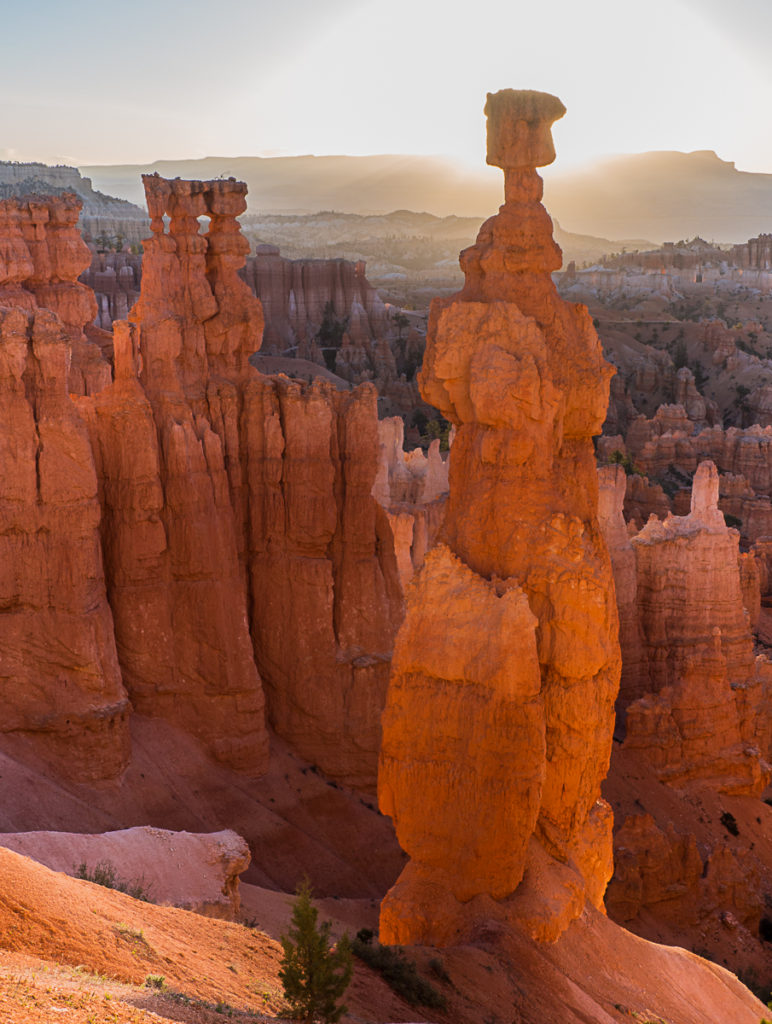 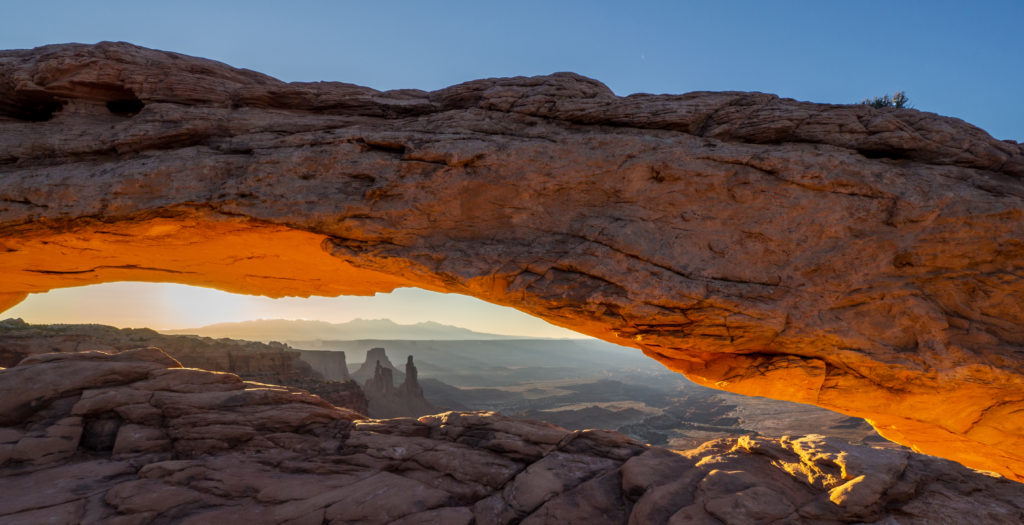 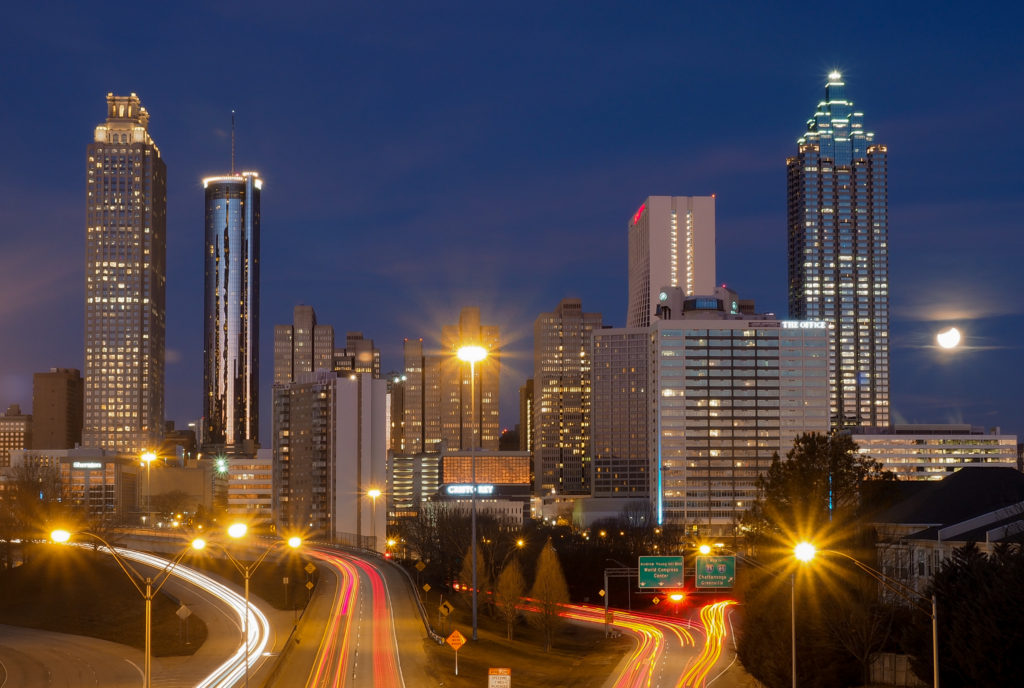 Downtown Atlanta, during the total lunar eclipse (January 31, 2018). Unfortunately, the moon was only partially eclipsed here before it ducked behind the buildings. 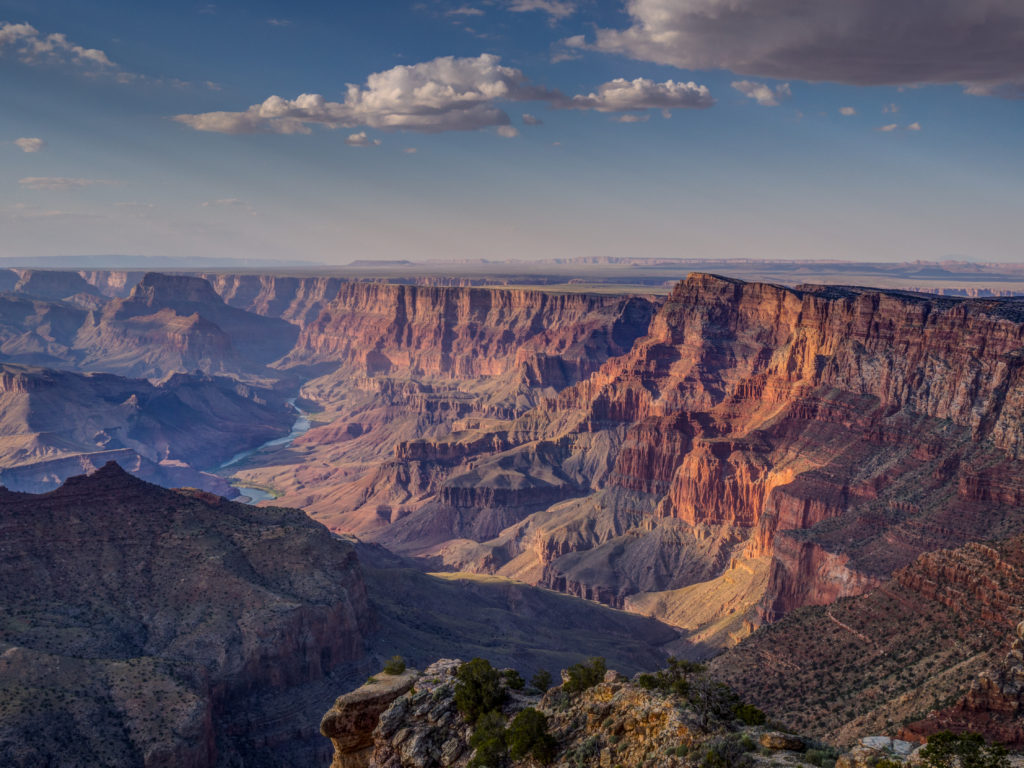 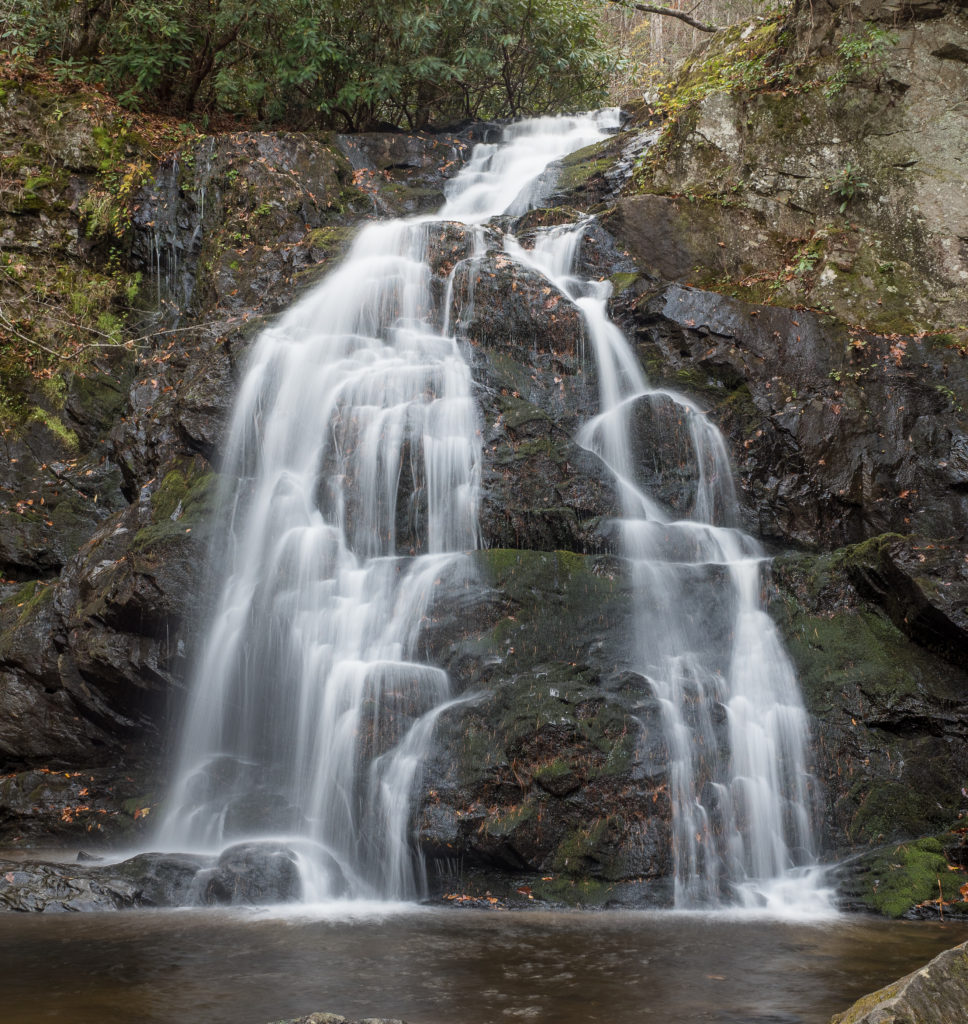 November 2017: Spruce Flats Falls, a short hike back from the Tremont Institute. 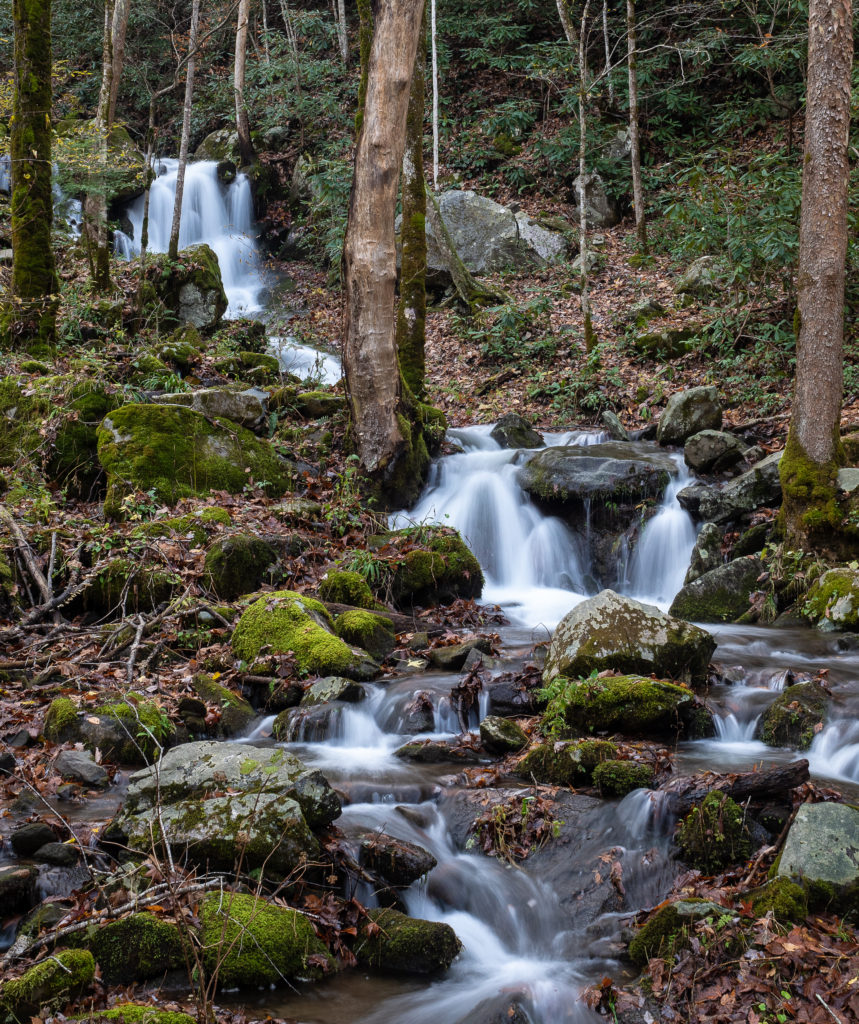 November 2018: A small cascade along Tremont Road. This area is so beautiful, with so many captivating scenes, that I’m not even sure this cascade has a name. It’s just one of dozens of features along the road. I love the crisp detail of the forest combined with the soft blur of the cascade. 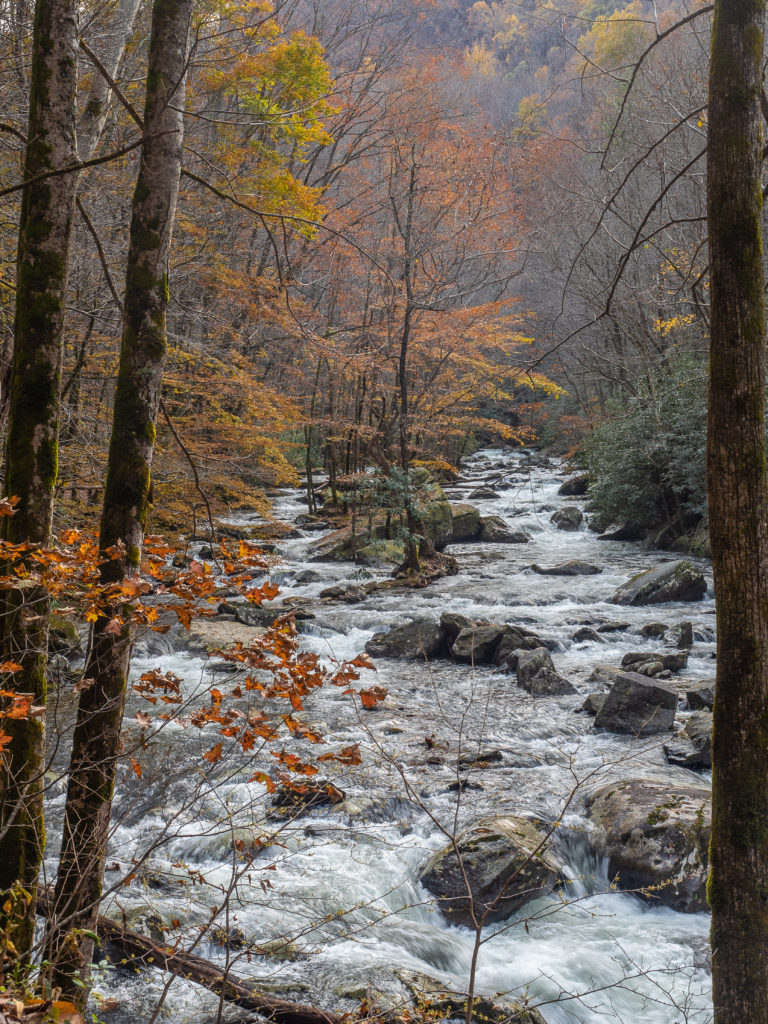 November 2018: Tremont Road. There was just enough color remaining on the trees in November, muted by the foggy conditions, to offset the stark details of the rocks and stream. 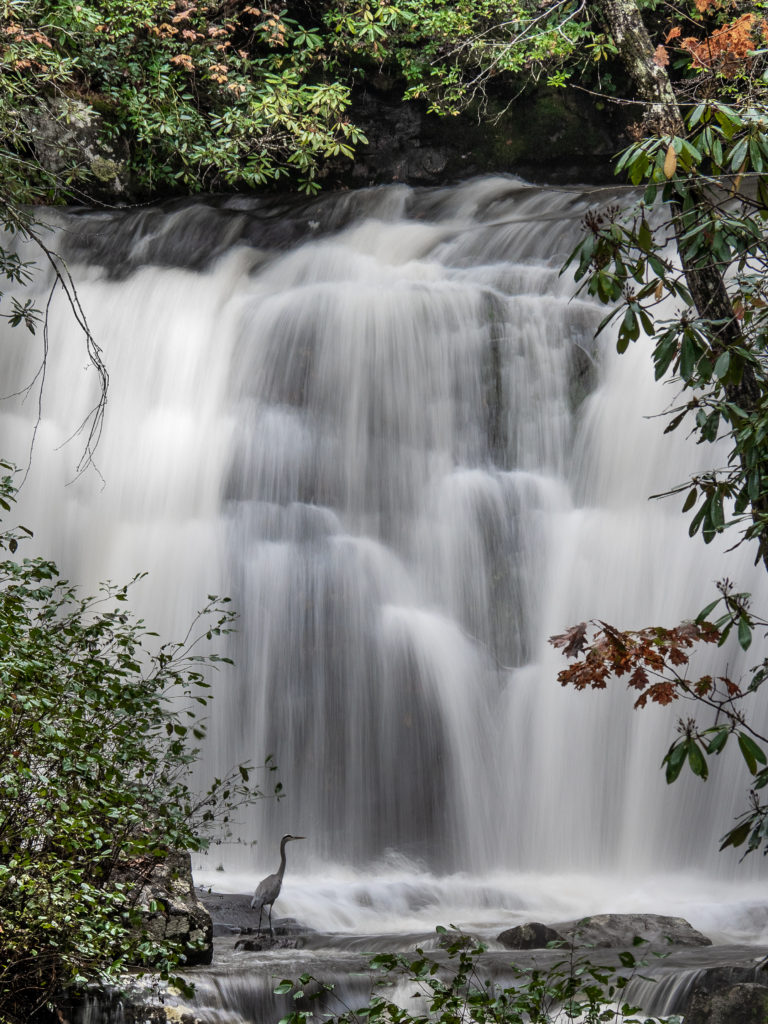 November 2018: Meigs Falls. I saw the Great Blue Heron standing at the base of the falls, but didn’t have my telephoto lens with me. So, I had to make a desperate sprint to the truck, change the lenses, race back to where I had been, and get this shot, just moments before the heron took off in search of a more promising location. 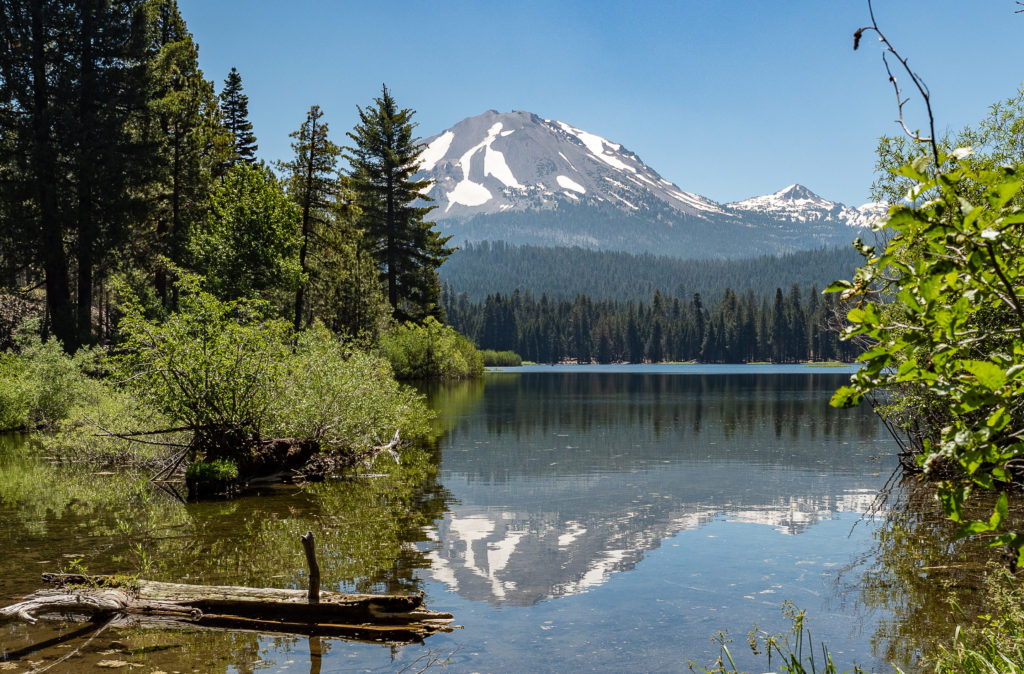 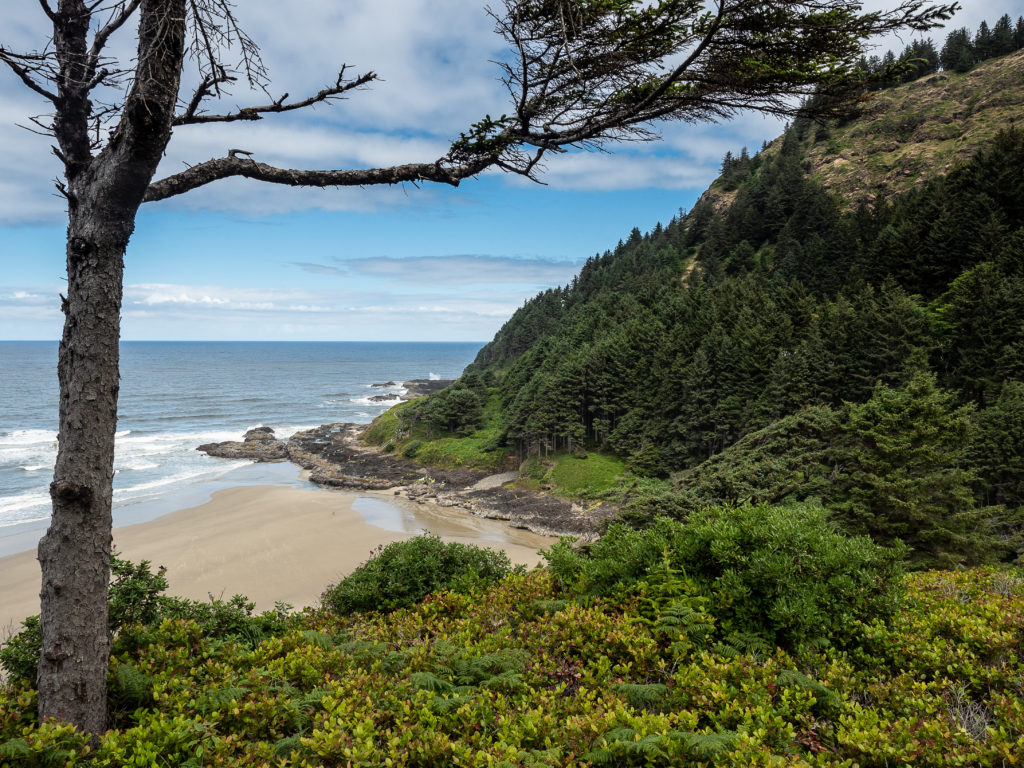 June 2018: The Oregon coast in the Suislaw National Forest. 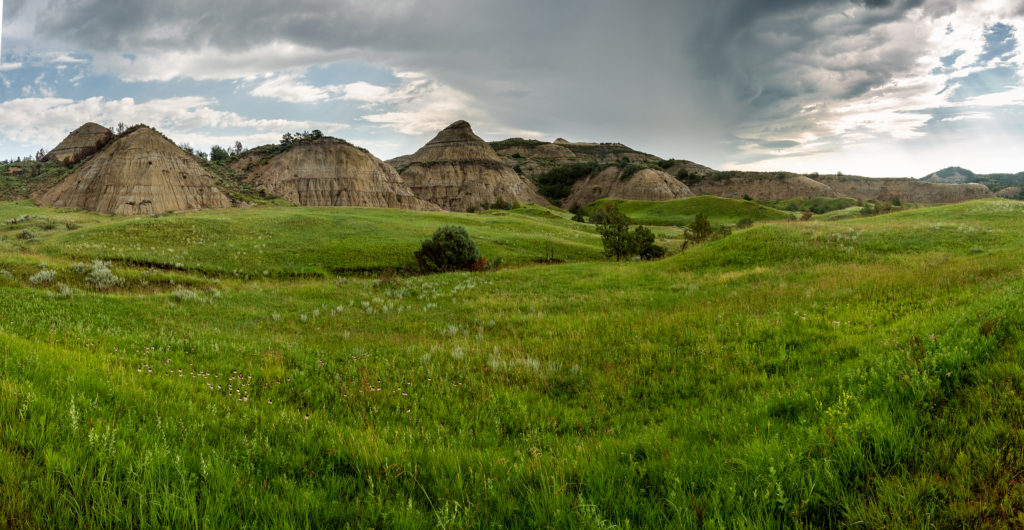 July 2018: The “Badlands” of North Dakota, after an unusually wet summer, presented unusual contrasts of color and texture.

June 2018: From the “Tunnel View” overlook, towards Yosemite Valley. 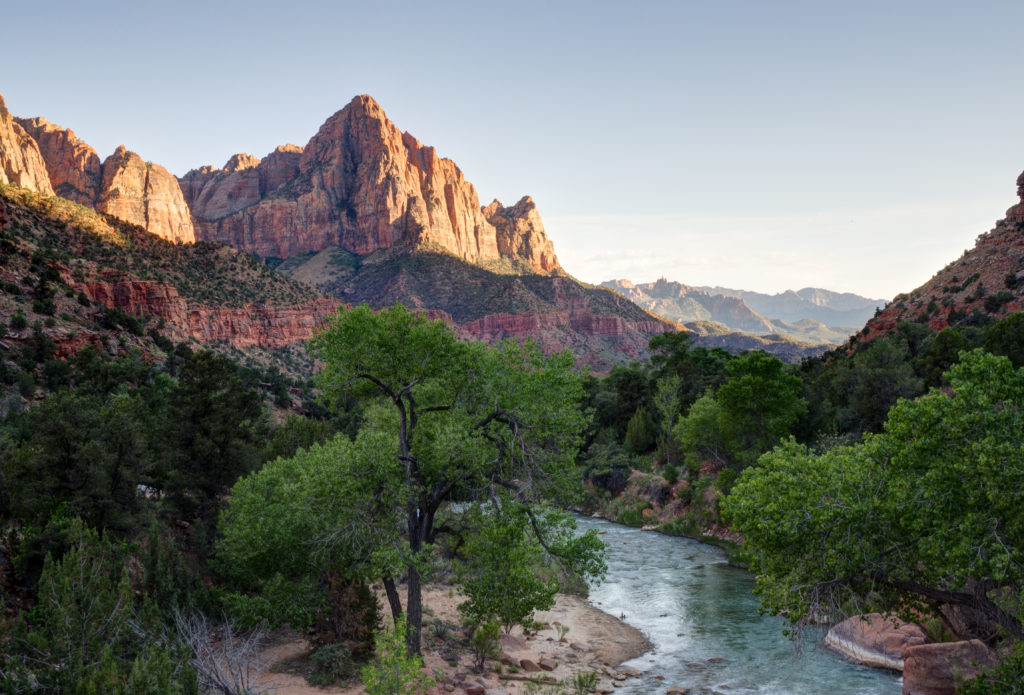 June 2017: Virgin River, with the Watchman in the background.